Angels in the Alamo

Every once in a while I come across someone in the industry who moves me; someone who’s found a way to use their business to impact those in need. It intrigues, amazes and inspires me. It is what I long to do.

David and Charlotte Putnam, owners of Alamo Gold and Silver are one of those inspirational stories. When employee Katsy Joiner contacted Southern Jewelry News about them we were eager to write their story. But, after digging deeper and speaking with David, the effects of their story go far beyond a feature article in our paper. 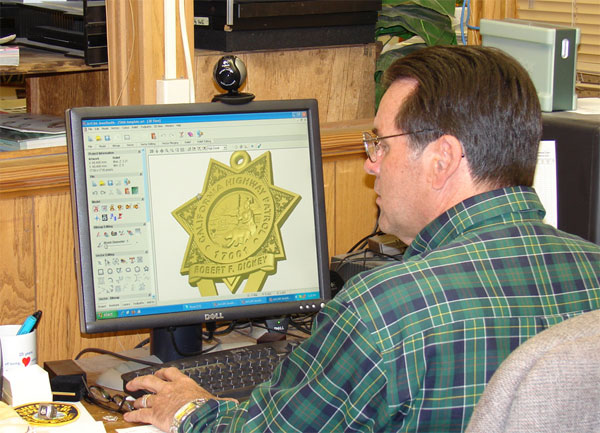 David Putnam retired from the San Antonio Police Department after 20 years as a detective. Having dabbled in fine jewelry security, it didn’t take much to convince him to co-own a retail jewelry store in late ‘70s. David quietly built his business until he retired from the force in 1990 and went to work full-time in the store.

“I do it because it means so much to me and to them,” says David Putnam of his Officer Down badge jewelry. (image, left)

When he lost a close friend from the SAPD in the line of duty his empathy and emotional connection to the former colleague sparked an idea. Why not make something that his wife could hold, take with her and even pass down to their children?

David obtained a copy of the fallen officer’s badge, including his name and badge number, and created a silver replica pendant for the fallen officer’s spouse. This miniature replica was identical to the real badge and included the rank of the officer. But the most impressive fact was that David gave the pendant to the family at no cost. It was his way of offering a sentiment that represented their loss – a small token for what they’d given up. “I wanted to give something to the family that they could take with them wherever they went,” states David.

It wasn’t long before word-of-mouth spread about the miniature badge pendant and requests came pouring in from all over the state of Texas. David was so moved by the phone calls and letters of heartbroken families that he decided to provide the badges for any fallen officer across the nation.

Despite the fact that his business only employed six people (including himself and his wife), David was committed to giving these badges to the grieving families.

“I truly believe the Officer Down badges are his ministry,” states Katsy Joiner, part-time employee of Alamo Gold and Silver. “I am a believer and it is obvious that God put David in the middle of these people’s lives to provide them comfort. How else do you explain a total stranger giving something so special to grieving families whom he’s never met?”

Today, the Officer Down badge program has provided more than 400 replica badges to fallen officers nationwide, 77 of which went to the NYPD/NYFD during 911. “There was nothing greater than standing on the stage with Rudy Giuliani presenting the families with their personal badge after 911,” recalls David. “We have a brotherhood that transcends state lines, and it was such an emotional time for them.”

David now makes the badges in a variety of products including rings, pendants, bracelets, tie tacks and money clips. Families can choose from 3⁄4 inch, 1 inch or 1 1⁄4 inch pendants and, now have a choice of metal. Reorders are a huge part of his business.

“I never did this for fame or to make money. I do this because I know what it means to the spouse, children and families of the fallen officers,” states David.

As he pauses for a moment to regain his composure, he finishes with, “I do it because it means so much to me and to them.”

I hang up the phone and, for the first time in my six year career of writing for SJN simply sit down to dry my own tears and let what David is doing really sink in. “Amazing,” I think to myself. Funny, but despite my love of words I sit speechless.

Alamo Gold and Silver carries a full line of retail jewelry in conjunction with the Officer Down badge program. Check out their website for more information about this special program at www.sadiamonds.com or call them at 866-333-3715.