One of the most enjoyable aspects of my job is doing the appropriate research and building a solid intellectual framework for developing insights into what will be hot for Christmas. But it’s not just entertaining to speculate on what will be selling – it’s also incredibly important. Getting the merchandising right is mission critical for our customers, since it’s not enough to select the right products at the right prices. We also have to build algorithms for the quantities that we’ll need on the shelf in mid-December, because with the Christmas rush coming later each year, and retailers stocking minimally to ensure that they don’t have excess stock on Dec 26, there’s very little reaction time available to get product in the pipeline. So, here’s a look at what I’m betting will be hot in December.

1) Vibrating Diamonds. We are now in year 2 of a major fad item, which means that demand will soar as we get into the Christmas season and low information gift-givers react to the trend. These major fads often occur in ways that are fairly predictable, based on a fundamental marketing principle called the Consumer Adoption Curve which relates how different consumer subsets react to trendy products. For example, Innovators and Early Adopters, who are psychologically predisposed to buy fad items early so they can be “on trend” before other members of their social group, generally participate in fads in the early stages, while most consumers are predisposed to be more cautious (e.g., Early and Late Majorities), and only buy after they know it’s “safe” to participate.

In order to properly anticipate demand at various stages during a hot trend, you need to determine where you think you are on the Curve. I’ve indicated my best guess on Fig.). 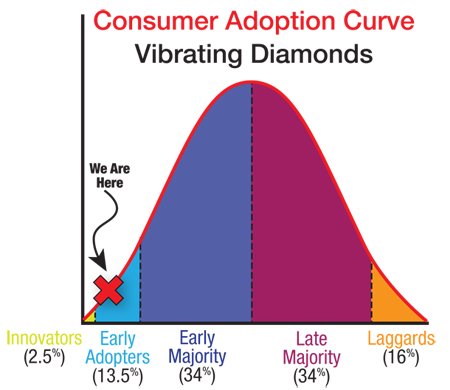 In December, as consumers from the Early Majority segment react to the vibrating diamonds trend, demand will increase to a point where at least one in fifteen, and perhaps as many as one in six, male gift-givers who walk into your store will be looking for this new product. If we get really lucky, males who normally don’t buy jewelry will also participate, in which case no matter how much you have on the shelf, it won’t be enough. (By the way, this is precisely what happened during the three stone and circle trends.)

As you develop your strategy for reacting to this trend, there’s another important issue you’ll need to address. Our sell through data, and information I’m getting from folks involved in selling this category to the majors, suggests that there is a significant selling opportunity in larger centers, including 1, 1 ½ and 2 carat sizes. Remember in 2000 when the majors were advertising ¼ ctw three stone rings for $199? Many independents were simultaneously selling 2 and 3 ctw three stone rings to their affluent customer base. The same thing is likely to happen this time around. Don’t miss it!

2) Colored Diamonds. Moderate price point diamond fashion jewelry has been dominated by colored diamonds since the onset of the recession, initially prompted by significant advertising expenditures by Sterling featuring LeVian “Chocolate” diamonds. But last year, as brown and “Cognac” were trending downwards, Sterling breathed new life into the colored category through the launch of their “Artistry” collection featuring blue, yellow, green, and purple diamonds. Expect additional advertising from all of the majors to create further demand as we move into the holidays.

4) The “X” ring. High-end boutiques and upscale jewelry stores in major metros started selling this look recently, and I suspect that we’ll now see a trend towards rings that cover a substantial portion of the finger. This is happening simultaneous with a re-emergence of nail rings, so bold and curvy “finger treatments” of all kinds will probably become important.

5) Back to Basics in higher diamond jewelry price points. Early in the fourth quarter, I expect De Beers will abandon its Forevermark (FM) positioning advertising featuring special styles like the Center of Her Universe halos, and will instead focus on psychological features possessed by FM that it broadly describes as “The Promise”, while simultaneously featuring classically styled items mounted with FM diamonds. Much of their advertising will be targeting engagement ring buyers, but since they also typically target “Heavy Users”, if members of your older, more affluent customer base are in the market for diamonds this Christmas, DeBeers’ new advertising focus on classic designs may influence their purchase decisions.

6) Bezel-set Lucite Frames holding little charms or interchangeable inserts. This trend comes from Origami Owl, and you can now expect it to influence your customers in a big way. In my view, this concept resonates on the same emotional wavelengths as Pandora, in which the wearer can select from a variety of special items that will then fit inside her pendant, ring or bracelet. This look may become important as more and more women see their friends wearing it.

7) Leather Wrist Wraps. The coming high stakes marketing war between Pandora and Endless Jewelry will be epic, as two giants with almost limitless funds duke it out in a battle over the wrists of American women. Jesper Nielsen, the founder of Endless, possesses the drive, tenacity, and funding capacity to turn Endless into a major player on the global jewelry scene, and with J Lo signed up as the face of the company starting in September, I suspect we’re going to see them gaining substantial traction fairly quickly. As they position their line of leather bracelets, you’ll see an intensification of a trend that already exists in upscale boutiques. Leather is cheaper than gold, and it’s a different kind of luxurious, so what better way to hit affordable price points in a trendy way? If you’re not merchandising leather with interchangeable elements, you’re likely to miss out on something important.

8) Layered Bracelets. The Alex and Ani phenomenon is remarkable, and has spawned a variety of look-a-like products featuring responsibly sourced materials, as well as nice charity tie-ins (e.g., Angelica). And while Helzberg used the back page of their Mother’s Day flyer to launch a sterling silver clone featuring medallions, I suspect that the more significant long-term impact of Alex and Ani will be not just in medallions per se, but in the stackable/layerable bracelet look (which is also consistent with Pandora’s latest launch). This plays into the leather wrap look as well, and for at least the next several years, I think that bangles, wraps, and soft stackable bracelets will be important, provided, of course, that you’re hitting affordable price points.

The challenge of properly deploying your discretionary seasonal merchandising budget to ensure you’re stocking and advertising the “right stuff” has never been more difficult. It’s always been important to follow the trends, but communication technologies have transformed society, which in turn has transformed retail. We live in an era of incredibly rapid information transfer, which makes trend analysis even more important than ever. The existential test for independent jewelers lies in the fact that if you fail to react properly to these trends, which now emerge, crest, and recede with ever-increasing speed, you’ll be left behind, and become increasingly irrelevant in your local market. One possible solution is to find suppliers who are doing the research, can help you keep your merchandising as well as your advertising on target, and will then stock balance what stops selling, so you can afford to move on to the next important set of trends. It might be wise to keep this in mind as you start your Christmas shopping!