Scarcely a day goes by without at least one retailer asking my opinion on if, and when, the bead frenzy will end. It’s an important question, given the extraordinary dependence that many better independent stores now have on bead lines for traffic and cash flow. As part of the diagnostic process of evaluating our customers’ marketing strategies, it’s generally helpful for me to understand the relative contribution of each merchandise category to a store’s overall revenue stream, and recently it’s not been uncommon for me to see 30 percent or more of gross revenues coming from beads. In order to understand what’s happening in this category, and perhaps gain some insight into what may likely happen in the future, let’s take a look at a fundamental marketing principle called the Product Life Cycle. 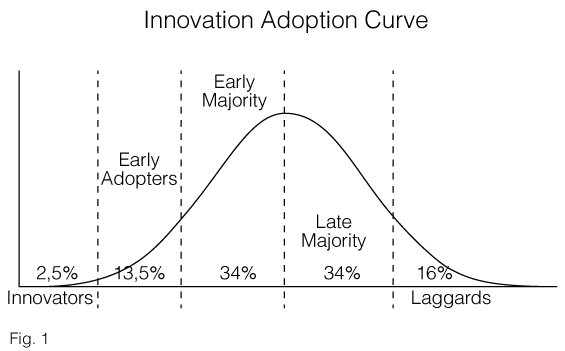 The graph that is produced when you plot the sales of any product (or product category) against time is called the Product Life Cycle Curve. We normally think of it as looking like a bell curve, but it can actually take almost any shape. When a product really takes off – say, Beanie Babies, for example – the front end of the curve shoots upward like a rocket, then typically levels out, and then at some point declines (sometimes rather abruptly).

When the modern study of marketing was born in the middle of the last century, it occurred to the experts of the day that the shape of the Life Cycle Curve was actually driven not by the product itself, but rather by innate characteristics of the consumers who were buying it. It turns out that just as you can describe an individual consumer’s characteristics like age, income, and gender (demographics), you can also describe – and segment – the psychological tendencies that become manifest when you look at patterns in their consumptive behavior (psychographics).

From a psychographic standpoint, different consumers behave in very different ways. Again, if you plot these behavioral purchasing characteristics against time, you get a generalized shape resembling a bell curve called the Innovation Adoption Curve (see figure).

In this model, the first wave of consumers to buy something totally new are referred to as Innovators. Something in their personal nature makes the “newness” of a product indescribably delicious. They like being on the cutting edge, and they’re willing to take risks because of the extraordinary satisfaction they derive from being the first in their social group to own something.

The next wave of consumers to try a new product are called Early Adopters. Like Innovators, they love being at the forefront. They just aren’t as fixated on being the very first to own something, and they are a little reluctant to participate in any new trend until someone else demonstrates a willingness to buy, and comes away with a good ownership experience.

The next wave is called the Early Majority. It’s at this point, by the way, that sales of the product are really starting to take off, because we are now getting into the wide part of the bell curve, where there are lots of consumers spending lots of money. The Early Majority are simply more risk averse than the Innovators and the Early Adopters. You might say they live as consumers by the credo “the second mouse gets the cheese.” They are generally willing to try something new, but only after some of their friends have had good experiences with it.

By this stage of the Product Life Cycle, sales are soaring, and more and more consumers are getting in on the fun. Even more conservative buyers known as the Late Majority then enter the market, and finally, a last wave called the Laggards finally get around to participating in the trend.

At this point, the challenge for most marketers is to come up with new ways to invigorate the product or brand, so that it doesn’t fade away from economic existence. There are two classic methods for accomplishing this. The first is to re-launch the product as “New and Improved”, and we see this technique used all the time, especially in household consumables. The second way is to do line extensions. For example, if your very popular dish soap is starting to show its age, perhaps it’s time to launch a shampoo with the same name.

There is also a third way to prolong sales for mature products, which we’ve certainly seen recently in our industry. In this approach, marketers try to create new ways to use the same core product, and this is especially effective in product lines where you can identify certain consumers as being “Heavy Users” (essentially the 80/20 rule applied to consumption). Since the late ‘90s, DeBeers has created a series of uses for diamonds – first Three Stone, then Right Hand Ring, then Journey, then Everlon – in a continuing effort to motivate consumers (particularly heavy users) by giving them new kinds of diamond jewelry to buy.

What’s important to get from all of this is the fact that once they get hot, most consumer products behave in ways that are fairly predictable. These classic models have strong predictive value, but they fail to address the very interesting question of how a product gets hot in the first place.

It’s probably safe to say that at any time, there are lots of “cool” products out in the marketplace, and a study of what propels a very small percentage of them to that theoretical “Tipping Point” where they become fads was actually published a decade ago by author Malcolm Gladwell. Gladwell’s key insight was to recognize that knowledge about items that suddenly become fads spreads in very much the same way that communicable diseases spread within communities. Gladwell applied the tools of Epidemiology – the study of how diseases are transmitted through large human populations – to known instances of fad creation, with very interesting results. If you trace the purchase data for fad items all the way back to the earliest innovators, you discover that there are two key groups of people – Connectors and Influencers – who bear significant responsibility for creating the fad, in the same way that Typhoid Mary and Patient Zero contributed to the spread of the deadly diseases with which they are associated. From this perspective, when we speak of an item or a video going viral, we are literally comparing the consumer adoption process to the way that influenza spreads. In this context, wouldn’t it be fascinating to do a retrospective analysis of the bead market to attempt to understand what lifted the category from relative dormancy to its current levels?

So, in looking at the bead market, should we assume that bead consumption will ultimately decline, or will specific brands of beads reach a point of stable multi-generational adoption the way that has occurred with brands like Rolex and David Yurman? Your evaluation of the relative likelihood of these divergent outcomes is dependent on where you think beads currently lie on the Innovation Adoption Curve (e.g., are current new buyers of beads Early Adopters, or do they belong to the Late Majority?), as well as to what shape you expect the Bead Product Life Cycle Curve to take (e.g., does the back side of the curve stabilize in the shape of a plateau, or does it resemble the trajectory of a marble falling off a table?).

An optimist would point to the fact that given the unique emotional connection to the product, the bead phenomenon is unlike any other self-selection fad that has ever taken place in the jewelry industry, and may possess considerable staying power as a result. A pessimist would point to the fact that this will be the first jewelry fad to reach maturity during the Internet era, and if retailers panic at the first sign of a sales decrease, you may suddenly see beads for sale on websites for pennies on the dollar. One thing is certain: whoever’s in the bar at closing time may wind up with a pretty big tab, so you should expect human nature to play a significant role in how this endgame plays out.

George Prout is Vice President of Sales and Marketing at Gems One, and can be reached via e-mail at georgeprout@aol.com, or at 800-436-7787.