Part of my pre-JCK Las Vegas preparation ritual includes forecasting sales activity, by customer, for the upcoming Fall season. And while the national economic numbers are generally pretty favorable, there recently appears to have been a bit of a downturn in retail sales for many of you, and I definitely detect that for some, traffic, sales and cash flow have simply never returned to pre-recessionary levels. The root causes of this are extremely troubling, and worth examination.

Under “normal” economic conditions, there is a predictable undulation in Gross Domestic Product, such that periods of economic boom will inevitably be followed by periods of recession. And while the “Great Recession” of 2008-9 was pretty awful, we should have seen a recovery that would have subsequently produced an economic climate that would allow your store to achieve even greater levels of sales and profitability. For many of you, that’s actually occurred (Congratulations!). But for some, business levels have failed to recover completely, and even went into a slump during the first quarter of 2015.

There are, of course, a variety of causative factors that are impacting your stores in a negative way.

This is only a partial list, and I’m certain that these and other well-known factors are all at play in stores that are experiencing a decline in sales. But data recently released by the non-partisan Congressional Research Service shine a spotlight on an even more disturbing scenario. It is becoming increasingly clear that historic levels of immigration – both legal and illegal – are actually destroying the indigenous Middle Class, and I am starting to believe that it is this single issue, more than any of the others, that is preventing recovery in large swaths of America – especially in rural communities.

The mathematics of economic cycles, as they relate to unemployment and underemployment, are fairly straightforward. As GDP increases, companies hire more workers to keep up with increasing demand. Conversely, when GDP contracts, companies have less need for labor, and unemployment grows. Typical recessionary periods don’t last more than 18 months, so workers who temporarily become economically displaced ultimately get new jobs when the labor market opens up, and unemployment levels decline.

But this time around, things are different, because during the past eight years, as the economy slowly recovered, the slow increase in job availability was accompanied by a massive expansion in the potential labor force by an incredible influx of new workers. And it’s important to note that these new immigrant workers not only displaced temporarily unemployed indigenous workers; their presence also deflected wages downwards, as a result of simple supply and demand. I’ll also emphatically add that recently reported reductions in the unemployment rate are completely artificial, as the US Government’s elimination of workers who have given up looking for work as members of the “unemployed” group produces a fantasy unemployment number that bears no resemblance to reality.

Figure 1 illustrates the impact of the influx of immigrant workers quite clearly. Note how as the number of immigrants has swelled during the past 10 years, average household income of the bottom ninety percent of tax filers has declined significantly, and the steep rate of decrease in the income curve suggests that things are likely to get worse. So imagine what is likely to happen as the US Government legalizes at least 10 million illegal immigrants, such that these new workers are enabled to come out of the shadows and compete even more effectively against indigenous workers. This is actually a complete disaster for the indigenous middle class, and it poses a serious threat for many of you, especially in rural environments, who may be dependent on these consumers for a significant portion of your sales revenue. 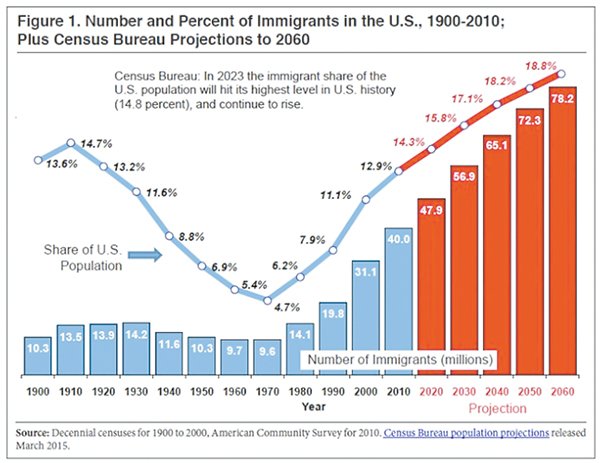 Even more disturbing, recent data from the Center for Immigration Studies suggests that this scenario represents just the beginning of a highly destructive trend (see Figure 2).  How we, as Americans, deal with this issue politically will have an enormous impact on business, and our society, in the years ahead. I hope we get it right.

For the purposes of this column, how you, as a retailer, react to this issue may ultimately have an important impact on the future of your business. As your customer base has come to “feel” less affluent (and may have, in fact, become so), you’ve reacted by changing your merchandising strategy to include a higher portion of inexpensive items (smart move.) And you may have also adjusted the price points of the items you advertise to attest to your store’s affordability, especially at peak periods (even smarter). But I’m going to suggest another strategy that may have a really important impact. Indeed, if you’ve seen a decline in sales so far in 2015, this strategy may be just what the Marketing Doctor ordered!

I’m speaking, of course, about your need to develop a Marketing Strategy to attract and sell to Hispanic consumers in your area. Regardless of how you feel about immigration policy, the demographics of this consumer group, as they relate to your potential sales revenues and profitability, are extremely encouraging. Hispanic Americans are the second fastest-growing ethnic group in the United States after Asian Americans. As of 2012, Hispanics constituted 17% of the United States population, or 53 million people. This figure includes 38 million Hispanophone ( Spanish-speaking) Americans, making the US home to the largest community of Spanish speakers outside of Mexico, having surpassed Argentina, Colombia, and Spain within the last decade. Latinos overall are the second largest ethnic group in the United States, after non-Hispanic Whites.

I’ve recently been doing some research on this topic. The merchandising and marketing adjustments needed to effectively pursue this audience are extremely modest, and from a psychographic standpoint, Hispanic consumers are much, much more likely to want to shop in an independent store. Indeed, unless you’re a niche player located in a major market, the odds are that your best route to achieving a sales increase lies in expanding your customer base. From a marketing standpoint, consider the fact that affluent consumers, given a choice between receiving a gift from Tiffany, Harry Winston, or your store, might actually not select you. But middle class Hispanic consumers, when given a choice between Kay, Zales, or your very nice jewelry store, would quite likely prefer the gift to come in your box.

It really is time to consider the economic purchasing power that 53 million consumers possess. Because increasingly, the male gift-giver you need to sell this Christmas may speak English with a Spanish accent.