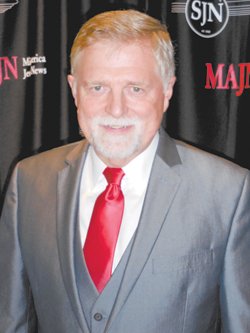 As I write this, I am sitting in a hotel bar overlooking Nathan Road, the “Golden Mile” of Kowloon’s Tsim Sha Tsui district, immediately across the Harbor from Wan Chai, home of the Hong Kong Jewelry Show. The Show isn’t quite over, but I bailed out on this last day a few hours early, exhausted (but pleased with the results) from my annual product development trip. So as I gather my thoughts and reflect on the events of the past five days, I thought you might be interested in the view from this exotic part of the world.

Think JCK is big? You should see Hong Kong. It takes me two days just to walk the Hong Kong Show, and I don’t walk it like American retailers walk the Las Vegas Show, averting their eyes lest they make eye contact and have to speak with a vendor they don’t buy from. I make eye contact with everyone, and I look at absolutely everything each booth is featuring, because I earnestly want to know what they’re making, in hopes of discovering products with sales potential in the U.S. Only this year, I confess I was left with a pretty negative impression. There was so little new, and so much of what I saw in the booths looked like the same stuff they were showing five years ago. It was initially a bit disappointing, and a measure of the extent to which the global economy is in a world of hurt.

I actually started the first day in a meeting with Ben, the owner of a leading Chinese manufacturing company whom I had never met before. Ben is one of those power players who you don’t get to meet unless you’re introduced by the “right” people, so it was actually quite a privilege to get his wise perspective. And what did Ben think? “Business sucks,” he told me, an exceptionally candid assertion from a captain of industry.

The problem, of course, is that the domestic Chinese economic juggernaut has run out of steam. In addition, Europe is a mess, Russia is an absolute disaster, and the American buyers have become pretty cautious. I knew I was at an important booth when ten minutes into the discussion, Emily, the head of jewelry sourcing from Walmart, made an appearance, and Ben’s eyes lit up. Funny how an appearance by the world’s largest retailer can improve the mood of a supplier.

Yes, the key Americans were present at the Show, as always. You can’t visit Hong Kong without seeing representatives from Stuller or Quality Gold, and buyers from all the major chains were present. The word at this particular Show was that Sterling was especially flexing their muscles. When most retailers buy, the manufacturer sets the price, and then the retailer either places an order, or passes. But Sterling? That’s different. When Sterling wants to buy something, Sterling sets the price. And in an effort to drive up their own margins, Sterling’s buyers had apparently become more demanding than ever. One manufacturer confided to me that “Sterling will only let me make 4 percent. 4 percent!!! Why bother!” But guess what? He’s going to take the order and process it, because he has no choice. He has to keep his factory going, the receivable will come in exactly on time, and with economic weakness impacting orders from around the globe, Sterling is in an enviable position, and they’re apparently using it to major advantage.

I was told that business at the “Airport” Show (yes, Hong Kong is so big that they split the stone dealers to a location 30 miles away) was at least a bit better. Many, many companies have recently allowed their diamond inventories to decline, and needed goods, regardless of general economic conditions. Word on the street was that the sightholders had accepted significant diamond boxes at the two most recent sights, with rough prices down about 8 percent, representing quite a turnaround from last fall when no one was taking rough. And polished prices appear to be firming up, to the extent that the sightholder community may make a nice margin on their most recent purchases. That’s badly needed good news, especially at a time when the banks have declared the diamond community persona non grata.

On the higher end, my friend Loretta, former colored stone buyer for Tiffany, expressed extreme dismay over the fact that the sapphire suppliers are now apparently infusing their stones with glass, the same way that ruby suppliers were doing a decade ago. I don’t know much about these things, but it really spooked her, so if you sell better grade sapphires, it sounds like you’d better beware.

And what of trends? Looks like I’ll be adding a couple of interesting new categories to our fall assortments, courtesy of evolving global demand that looks promising. Two stone was evident everywhere, and everyone seems aware of Sterling’s commitment to doing massive numbers in the category, so the “important” suppliers – the ones who make what America buys – were all on board with some pretty cool new styles.

But the BIG trend, the 800 lb. gorilla in the room, and the thing in the back of everyone’s mind, of course, is lab grown. Yes, there are plenty of jewelry people in a state of denial about this, even some very smart ones, but the coming exponential expansion in man-made diamond sales seems inevitable to me, so I encourage you to implement a strategy to take advantage of the opportunity that’s coming. I’m hearing that Helzberg will be the earliest adopter amongst the chains, but I’ve been told that the only thing keeping Sterling out of the category (for the time being) is supply. By 2020, one of the primary sources of lab grown will represent the 13th largest mine in the world, and with very smart folks like Shrik Mehta from Combine making huge investments in diamond growing machines, it’s just a matter of time before man-made takes its place as a major part of the diamond business.

What’s extremely encouraging to me is the fact that most of you have historically been unwilling to put an I2 in a box with your name on it, because you felt that it might negatively impact your brand equity. But the majors have had no problem with that, have they? Which means that you’ve been at a competitive disadvantage for quite some time, as the majors sold really ugly diamonds at prices that made you look uncompetitive. But now, you’re going to be able to sell a gorgeous white, SI2 one carat for 4 grand, which will basically annihilate the chain stores’ ugly diamond business. So you’re going to benefit from this, big time. And since marketing will be the key differentiator in this new trend, and that’s the part of this business that’s totally in my personal swing plane, I’m really, really excited about what lies just around the corner. So fasten your seat belts…the diamond jewelry business is about to give those of us who navigate this thing properly an awesome ride.

George Prout is Vice President of Sales and Marketing for Gems One Corporation, and can be reached via e-mail at info@gemsone.com, or at Gems One’s New York office at (800) 436-7787.