You may not know Buddy or his jewelry stores in North Carolina but one thing’s for sure, you can’t miss his car. With big diamond magnets strewn all over it, along with the logo for his most recent promotion, no one can miss Buddy’s car – and that’s exactly the point.

Owner of Buddy’s Jewelry (Mount Olive, Dunn & Goldsboro, NC), Thomas Turner was looking for ways to give back to a community that has supported him for more than sixty years. When he heard other jewelers using raffles to raise money for charity he got to thinking, ‘maybe we can do something like that. How about we give away a car?’ And just like that Buddy’s Big Give was born. 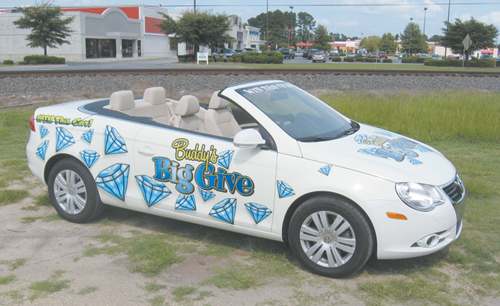 The Volkswagen EOS convertible North Carolina based Buddy’s Jewelry is raffling off in
their Buddy’s Big Give promotion. All the proceeds collected will be donated to local schools and charities.

When Mr. Tommy, as he is affectionately known, gathered his employees to tell them his latest philanthropic idea, no one expected him to say he wanted to give away a car, but that’s exactly what they heard.

Buddy’s Jewelry has been a mainstay in Mt. Olive for the past 45 years. Thomas Turner proposed the idea of raffling off a car with the proceeds donated to local schools and charities. Immediately everyone started pitching in ideas, naming people to help get the contest up and running, as well as deciding the specifics of the program.

With his staff on board they started polling their clients asking what make and model would be most appealing. In the meantime Thomas Turner called a family friend who also ran the local car dealership and told him about their idea. Within a few weeks Thomas Turner purchased a Volkswagen EOS convertible and, three months after Mr. Tommy pitched the idea to his staff, Buddy’s Big Give began.

“Everyone started getting really excited,” recalls Kristen Moody, sales associate at the store. “We agreed to have the car decaled with the name of the contest and big images of diamonds covering the body of the car so that as we drove it between stores people would notice the contest.”

Buddy’s Big Give was designed to generate money for the sole purpose of giving that money away. Mr. Tommy wanted to sell $5 raffle tickets and let the buyer designate to which school or charity they wanted the money to go. The staff made it very clear that the car would have a few miles on it. Mr. Tommy allows the staff to drive it between all three locations to advertise the program.

The first raffle ticket for the car was sold August 2008 and the contest is still going on. Each month Buddy’s staff sells hundreds of tickets and then, at the end of that month, draws one name from that month’s sales. The monthly winners receive a $500 shopping spree in Buddy’s and their names are put in the drawing for the car which is slated for November 2009.

“We’ve been intentional about making our customers wait a year on the drawing,” states Kristen. “We really wanted to give everyone time to hear about the contest and see the car. We also wanted to raise a lot of money for the schools. We didn’t want to start the contest and a few weeks later end it.”

It seems that patience has paid off. Buddy’s has seen a marked increase in ticket sales and store traffic. They’ve also seen an increase in new prospective customers come through the doors just to buy a raffle ticket.
“We’ve really created a buzz in the community and in the store about this car. People are dying to know who is going to win it and we’ve maximized the amount of money we’ve raised for charity.”

With the final drawing less than a month away, the local ‘buzz’ continues to grow. The staff is busy preparing the dinner reception at which the winner will be announced. And, the money keeps coming in. In total, Buddy’s Big Give Away has generated thousands of dollars from hundreds of tickets sold. And all of the proceeds go directly to the purchaser’s charity of choice.

“We’re proud that we’ve been able to raise this much money for our local schools and charities,” exclaims Kristen. “We really want to help the community that has been so good to us for so many years. We are all in this together and this is our way of saying thank you.”

The Mt. Olive community has supported Buddy’s since it opened in 1945. Buddy Turner found a love for watch making while recovering from tuberculosis as a young man. The medical centers would teach watch making to the infirm while they were bedridden and Buddy took a great interest in it. As soon as he was healthy again he found a storefront in the heart of downtown Mt. Olive, NC and opened the doors to Buddy’s Jewelry.

Today, Buddy’s son Thomas Turner is at the helm of the company and has been since the late seventies. He joined his father after obtaining his engineering degree and working several years for a chemical company. Thomas watched the Mt. Olive community, as well as Dunn and Goldsboro, embrace his family’s store generation after generation, and he strives to find ways to give back to them with charitable giving like this program.

His children are now a part of the company, and they also recognize how the people of these small towns have supported their family’s business. Scott Mohiser, stepson to Thomas, heads up Goldsboro while daughter Brandi Worth manages the Mt. Olive store.

When the winning ticket is drawn this month there will be one lucky person taking home a Volkswagen Eos. But the real winners are the children who are already benefiting from the extra funds donated to their schools. Buddy’s Big Give makes everyone a winner!

Be sure to follow up with Thomas Turner and everyone at Buddy’s to see just how this contest ends. You can call them at 910-892-1827.

Jewelry marketing lessons for growth in 2023

Jeweler’s Insurance: The wrong time to ask the right questions!