Estimates are that as many as 3,500 jewelry outlets will close their doors this year. All too many jewelers are in survival mode. Yet Barnes Jewelers of Goldsboro, NC, isn’t. In fact, Barnes is expanding from one outlet to two.

Manager Stephen Barnes says the reason for his success is simple: he’s got a double edge. “The Edges are absolutely 100% responsible for this,” he says, referring to Abbot & Shapiro’s The Edge System with its retail automation technology and The Edge Retail Academy and its beyond-cutting-edge coaching.

For decades, effective use of information technology has played a crucial role in the success of major corporations. It’s easy to forget that in the early ‘80s, Wal-Mart was an upstart and K-Mart seemed unbeatable.

Sam Walton’s aggressive and creative use of information technology, logistics management, retail automation and advanced analysis was one of the primary ways he vanquished his giant competitor and made Wal-Mart the titan it is today.

Until recently, only chain and large stores had access to the full spectrum of powerful tools that were available. With the introduction of Abbott & Shapiro’s The Edge System and the partnership that has created The Edge Retail Academy, that’s changed.
This partnership brings together two critical forces that are transforming the ways retailers operate and radically improving everything from their profitability to their quality of life: technology and analysis.

Retailers committed to working with The Edge System and The Edge Retail Academy are reporting radical results, saying not just their business, but their very lives have been transformed. Through tools that enable them to see what is happening both with their businesses and with the industry overall, they are making more money with less stress than ever before.

In this column, we’ll go to specific retailers every issue and look at the ways that they are improving their businesses and their lives through the use of technology and effective business coaching and analysis.

In today’s world, information isn’t just power. It’s money, success and prosperity. Just ask jeweler Stephen Barnes, who has used the data he’s gathered through retail automation technology and the advice he’s gotten from experts working with that data to spur his business to unprecedented success.

Barnes is currently manager of Barnes Jewelers. Since its founding in 1980, Barnes Jewelers has grown from a three-person operation operating out of a 1,000-square foot storefront to an 11-person business in a 6,700 square foot facility in Goldsboro, NC. 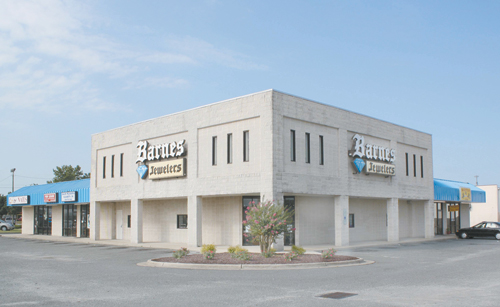 Barnes Jewelers in Goldsboro, NC has used data gathered through retail automation technology
and advice from experts working with that data to spur their business to unprecedented success.

Despite the down economy, over the last couple of years Barnes Jewelers has done well enough to move forward with a new outlet, Barnes & Jernigan Jewelers, which will open business in the next few months in Roanoke Rapids, NC.

One factor above all others has driven Barnes’ growth: his use of technology and consulting services – specifically, those provided by Abbott & Shapiro, makers of The Edge system, and by The Edge Retail Academy. The Edge System has helped get Barnes Jewelers out of the paper track and into an electronic world where routine tasks are automated and information is collected every day. “There is no way to track this on pen and paper,” he says.

The Edge Retail Academy has given Barnes the ability to take the information The Edge System has collected and turn it into information that brings more dollars to his store. Estimates are that half of all jewelers are still living in the paper world. Up until 2004, Barnes was one of them. Then he decided it was time to change.

The Edge System had the most functionality for the least money. It enabled Barnes Jewelers to present a more professional image to the world as salespeople entered information into Point of Sale terminals instead of writing it on paper. But the technology did far, far more than act as an automated cash register.

Capturing data on every sale gave Barnes Jewelers unprecedented ability to manage and operate its business. “It made an incredible impact on our inventory alone. From a business management standpoint, it enabled us to make the right decisions about how to operate our store,” he says.

Tracking inventory went from being a trial to a near-breeze. “We used to do physical inventory once a year. We would have to close our store for a week. Once we converted to The Edge system it took us just four hours to do the same thing.”

What has put everything on afterburner – and helped drive the decision to open a second store – has been working with The Edge Retail Academy. The Edge Retail Academy is helping on a number of levels. Part of the assistance comes through its ability to analyze the information The Edge system captures about how Barnes Jewelers is operating.
Equally important is the fact that Edge Retail Academy clients get to tap into a full, constantly updated database of information gathered from 160 top retailers. “For the last six months or so, they’ve been coaching me, and I’ve been using The Edge Retail Academy to track my store and compare it to other stores within the industry,” Barnes says.

What Barnes saw was that he was doing a great deal right – so much so that opening a new outlet was a far less risky move than it might seem. “I saw that Barnes was doing well and ranked in the top 10 percentile in all categories for independent jewelers.
“With the new store, they’re helping me determine what level of inventory I need to stock or carry, what my budget should be for my inventory, and what kind of sales projections I need to make for that inventory,” Barnes says.

It’s impossible to take the risk out of business. But accurate projections can improve the odds enough to enable a store to beat its competition and make good money at the same time – and that’s what it’s all about.

Industry surveys show that Abbott & Shapiro LLC’s The Edge system is the jewelry industry’s leading retail store management system. The Edge Retail Academy is considered the leading consultancy in training users to take advantage of such technology. For more information, call Abbott & Shapiro at 866-580-3343, e-mail sales@ajsllc.com or go to www.ajsllc.com/. The Edge Retail Academy can be reached at 702-982-1704, e-mail carol@edgeretailacademy.com.