One woman’s determination is all it takes to leave a legacy. Just ask Mack Thomas, grandson to Helen Infinger, the 75 year old owner and operator of Infinger’s Jewelry in Walterboro, South Carolina. Mack watched his grandmother’s sheer determination and faith carry her through some tough times over the years, and has learned a lot from her. Her story of inner strength, faith and resolve is more than just a good business story; it is the journey of an amazing woman.
In 1954 Mack Infinger borrowed $100 and opened a watch repair store in Walterboro, SC. He completed his education at a watch repair school in North Carolina and, for ten years, worked hard to build his business and earn a living for his wife, Helen, and their two daughters.

In 1964 Mack Infinger, who had polio, succumbed to a heart attack. Suddenly, Helen was a widowed mother of two without any formal training in jewelry or watch repair. Her children, Cindy, age six, and Victoria, age ten at the time, looked to her for support. She had no choice. She decided to take over the store.

With very few female business owners in the small southern town, Helen was repeatedly told she would fail. The male-dominated jewelry industry wasn’t helpful either since there just weren’t many female retail owners out there. She had everything going against her. But she refused to give up.

But Helen’s work ethic was amazing. She refused to quit. John Honduruz, an industry salesman, took notice of Helen’s struggles and befriended her instantly. “John was so kind to my grandmother. He was practically like family. If he walked into the store and it was busy John would step behind the counter and help customers. He was not only a sales rep but a close and dear family friend,” recalls Mack.

As her girls grew, they helped out as well. Helen continued to try new innovative things to maintain the appeal of her store. Infinger’s was the first retail jeweler in Walterboro to offer in-store ear piercing. She was one of the first to purchase a computer engraving system, and, when opportunity knocked Helen seized the chance to expand her store.
“My grandma has an adaptive nature where she tries new techniques and new technology, even at her current age,” states Mack. 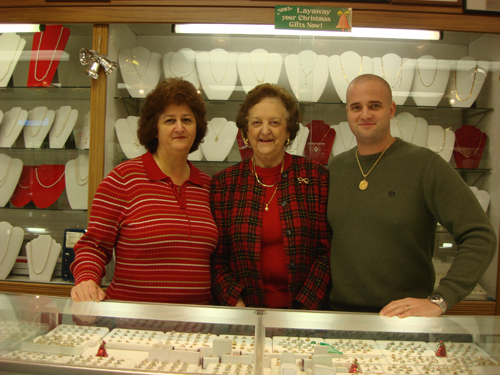 Helen still comes in every day. She arrives before 7 a.m. and stays until 6 p.m. Her reputation as a strong, forthright and honest woman has garnered her more than just customers. Mack testifies to the number of locals who come in for advice. “Her customers come in and tell her everything that’s going on in their lives. Often they ask for advice, knowing that my grandma will tell it like it is,” says Mack. “She told me that jewelry sales are 40% salesmanship and 60% psychiatry.” Cindy jokingly calls her Lucy (from the cartoon “Peanuts”) for the advice she gives.

Another unique feature of the store attributed to Helen is her willingness to share her faith. Characterized as a ‘religious lady,’ Helen and her grandson openly live out their faith. When a customer came in discussing religion and Helen discovered that she’d never been saved, Helen was able to help her find Christ. “That is just who she is,” states Mack.
As for the future, Mack and Cindy are ready to take over the reins of the store. After completing several courses from the Blair School for Jewelers, Mack participated in a shadowing course with Southern Jewelry News’ columnist and bench guru Chuck Koehler. “I learned so much from Chuck. He is a great guy. He taught me how to double my productivity by cutting my labor in half,” declares Mack. Cindy and Mack are both GIA certified as well.

Although Mack and Cindy believe Helen will continue to come into the store until she physically can’t, they have soaked up enough of her business sense, work ethic and customer relations talent to carry on the Infinger business.

“My grandmother has a heart of gold. She has taught me that you always help your neighbor, always have fair business practices and never refuse a repair,” says Mack.