The Story of Amber 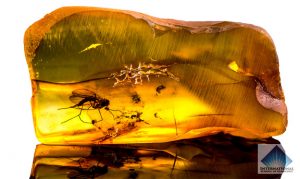 Amber. Made famous by the Jurassic Park movie series and a highly prized gem material for centuries. But what is this ancient tree resin turned gem material, and how do we identify it as authentic amber? The Story of Amber must begin with a little history, starting with how amber forms to the story of the most famous amber creation: The Amber Room.

The world-famous Baltic Sea amber was formed over 90 million years ago when ancient glaciers moved through the region knocking over massive forests and burying the trees. The gravels and sediments covered the trees preserving the resin which was allowed to harden into what we know as amber. Trees during this period grew much larger and faster than trees we see today. An example of ancient tree growth is below in this fossilized 100-million-year-old conifer tree stump I located in a sedimentary deposit 75 miles west of our office here in Helotes, Texas. Below left is the partial tree stump, below right is a piece of calcified, fossilized conifer tree recovered from the same formation. We uncovered one complete calcified conifer tree fossil, which was 6 feet (1.82 meters) in diameter and approximately 40 feet (12.91 meters) in length, but it could not be removed due to the fragile nature of the thing.

Notice the growth rings. Each represents a year of growth, and each is about one inch in width, an amazing growth rate due to higher level of atmospheric oxygen and rain during these epochs. This is how ancient trees produced huge amounts of resin that led to so much amber for us.

Today, Baltic Amber is recovered through mining and by searching the sea shore for amber that is released from the sea floor and floats in the salt water to the surface and eventually to the beaches. That will be important later.

In 1701, several tons of natural Baltic amber were used to create a most amazing room in the Charlottenburg Palace, home of Friedrich I, the first king of Prussia. (smithsonianmag.com) The room was designed by German sculptor, Andrews Schluter. You can see a recreation of this fabled “Amber Room” below the first paragraph above. To solidify a peace agreement between Prussia and Russia, Friedrich I gave the Amber Room to Peter the Great of Russia. He packed and shipped the amber panels that created the room to Russia, to eventually be installed in the Catherine Palace in Pushkin, Russia.

The room contained an estimated six tons of amber covering 180 square feet, all backed by gold leaf creating what some have called the “Eighth Wonder of the World”. Unfortunately, in 1941 Adolf Hitler invaded Russia and captured the town of Pushkin and stole the Amber Room and took it to Konigsberg, Germany where it was installed in a museum. Its time there was short, as Allied bombing caused the amber panels to be crated off to who knows where. They are lost to this day. A replica has been built and is on display in Tsarskoye Selo State Museum in Russia, but the original Amber Room has been lost since the Nazi invasion of Russia in 1941. (Smithsonian online) This has become one of the great mysteries and treasure hunts of World War II: Where is the original Amber Room?

While history is an important topic, time is an even more important topic when it comes to amber. Authentic amber is at least 100 million years old. Authentic amber is found in only two locations of the world: the Baltic Sea area and the Caribbean island of Dominican Republic. And with all due respect to the story line of the movie “Jurassic Park,” authentic amber rarely has bugs. In fact, bugs in true amber are a collector’s item and very valuable. So, what, you may ask, is all of this cheap amber on the market? That material is called “Copal”.

Copal is a resin from trees just like amber, but averages only 1 million years old. It is neither as hard nor durable as true amber. But copal has lots of bugs, which makes it in high demand. The price difference of amber to copal is huge. The question becomes – since amber and copal have the same tree resin origin, how can the grass roots jeweler and gemologist separate the two? The answers are probably easier than you think.

Do Not Use the Hot Point Test

Since the vast majority of material on the market is copal, and a hot point will push into copal easily, this test is highly destructive and should not be used. The use of hot point is fine if you have authentic amber. It will be hard to damage it with a hot point. But since about 90% of the material sold as amber is actually copal, the hot point will leave you with a melted hole in the piece. Try explaining that one to a customer!

The Quick and Easy Tests

I learned long ago that to teach gem testing required me to obtain the actual specimens and do the tests myself. This is what I have done below: obtained natural Baltic Amber, Bolivian Copal, and plastic imitation of amber to create what I am about to show you.

Specific Gravity: The SG of authentic amber will vary, but in general will be around 1.05. Plastic and most copal resin will have a higher SG in the 1.15 and above range, depending on factors such as included gas bubbles. As a result, all will sink in a bowl of pure water. However, by adding table salt to the water and bringing the specific gravity of the water up just slightly, true amber will float fairly quickly while plastic and copal resin will tend to remain at the bottom for a far longer period of time as the salt is added to the water. A demonstration is below: 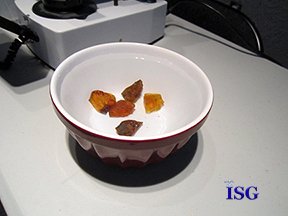 A group of five (5) amber specimens are placed in a bowl of water. All five specimens quickly sink to the bottom of the bowl where they remain. 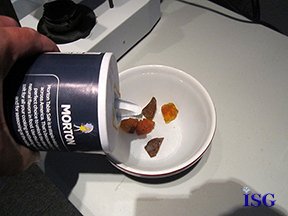 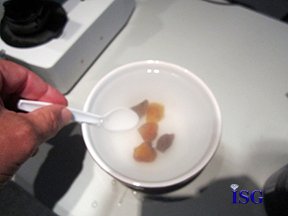 Remember that Baltic amber is often found floating in the sea. While the Baltic Sea is less salty than open ocean, there is still enough to float amber. 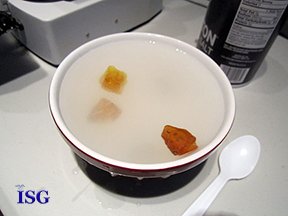 Shortly after adding a small amount of salt a few of the specimens begin to suspend in the water, neither floating or sinking, but easily suspending up and down in the salt water solution. 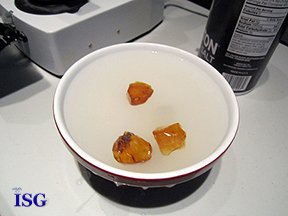 With about one full teaspoon of salt added, three of our suspected specimens float to the top and are quite buoyant in the water. Two of the specimens remain at the bottom and do not suspend or float at all. 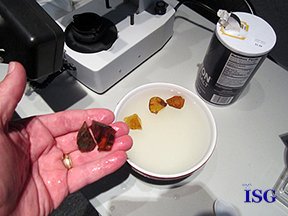 I confirm that the two pieces that stayed at the bottom and did not float in the salt water solution are indeed a plastic imitation and copal.

Amber Fluorescence: Another test to help separate copal or plastic and true amber is the use of fluorescence. Below left is an image of copal (left) and true amber (right) in ambient light. In the image below right, taken in short wave UV, you can easily see that the copal is inert while the amber is producing a pale blue color as predicted.

Gemological Properties
Source: Baltic Sea Region and the Dominican Republic
Chemical: Fossilized tree resin of approximately 100 million years or older to be true amber
Formation: Sedimentary deposits of ancient coniferous trees and others possible. Amber is the fossilized resin of these tress and is often found to contain small plants and insects from the periods of Jurassic to Cretaceous. Amber should not be confused with copal resin which is also tree resin but is nowhere near as old as amber and is therefore not as hardened or long wearing. Some of what is sold as “copal amber” from Colombia and other locations has been found to be less than 250 years old.
Crystal System: None. Organic
Unusual Properties: Amber with identifiable insects and plants are quite rare and valuable. However, care should be taken when buying expensive amber pieces with insects or plants inside. There are numerous verified reports of copal being heated and softened, and then bugs being pushed inside a piece by unscrupulous dealers who then sell them as expensive amber.
Colors: Light yellow, green, dark reddish orange, and many variations of these as well.
Wearability: Will be damaged by jeweler’s torch. Will burn/melt if subjected to heat. Amber has been into many different types of jewelry items for centuries.

Amber in Art and Jewelry 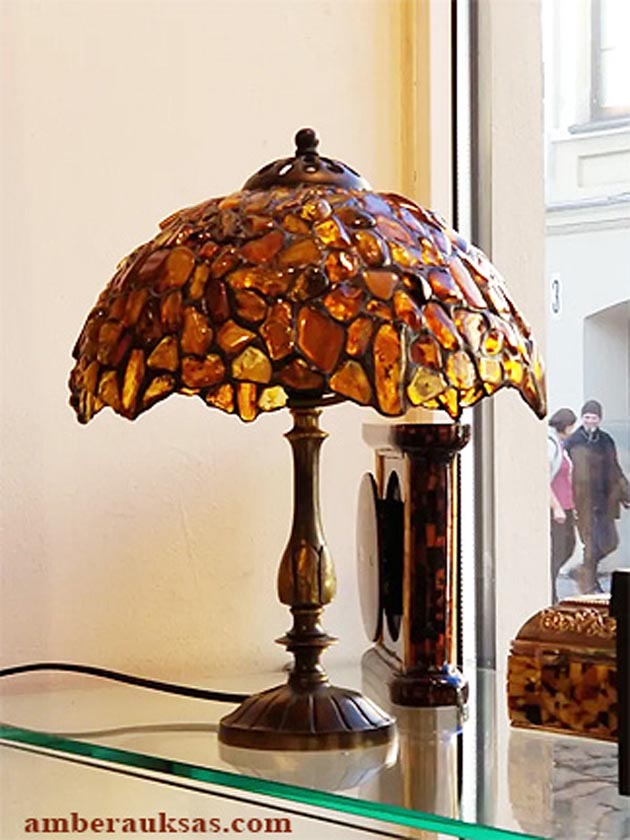 Amber has been used in art and jewelry for centuries. If you wish to inventory amber in your store you should only work with a reputable amber dealer with direct connections to the Baltic Sea and Dominican Republic amber locations.

I recommend Amber Auksas. Direct source, wonderfully experienced expert, and fantastic people to work with. There are major revenue streams for jewelers with amber if you have a quality source, and Amber Auksas is our most trusted source on all levels. Click the link to visit their online store, or click the lamp image to visit their wholesale page.

The story of amber is obviously much larger than what we can cover here. But I think you get an idea of just how amazing this wonderful gem material is that was sent to us by ancient trees. It is all part of the wonderful world of gemstones and gem materials.