The Story of Ammolite

Seventy-nine million years ago (and longer) the earth’s oceans were full of these shelled sea creatures called “ammonites” as seen here. They existed in every ocean on earth and swam around with things like ichthyosaurs, mosasaurs, and plesiosaurs. Then suddenly, around 65 million years ago they disappeared along with most of the earth’s dinosaur population.

Although they had been dying and falling to the bottom of the oceans for eons, the extinction created concentrated layers of ammonite shells that over millions of years were covered up by the ocean’s sediments. Over time, these buried shells were subjected to great heat and pressure that caused the calcium carbonate to reform into layers of aragonite, a mineral that also creates the beautiful colors of nacreous pearls. This creates the iridescent colors of the outer shell layer in much the same way that aragonite creates colors in pearls. 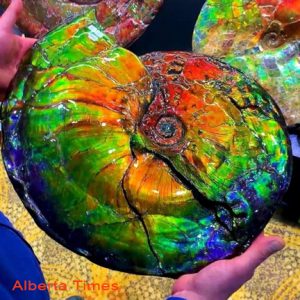 Of the millions of years of ammonite shells falling to the ocean floors, the only region that produced just the right conditions for the formation of the layers of aragonite from the shells is the area of eastern Alberta, Canada known as the Bearpaw Formation, along the shores of the Oldman River and St. Mary River. (ualberta.ca) Although poor quality transformed ammonite shells can be found along the path of an ancient inland sea that once extended to Montana, only the region of Alberta produces true gem quality ammonite shells that are known as “ammolite”.

In 1979 Rene Vandervelde purchased an ammolite mining business in Alberta from the Kormos family and named it Korite, which is now the world’s largest producer of gem quality ammolite (korite.com). The location and its beautiful gem material had been known since its discovery in 1906 by the Geological Survey of Canada, however serious commercial mining did not commence until the work of Vandervelde. After working many years to establish and develop the market, finally in 1981 ammolite was officially designated as a gemstone by the World Jewellery Confederation (CIBJO), and in March, 2022, was announced as the Official Gemstone of the Province of Alberta, Canada from which it is mined. (globalnews). 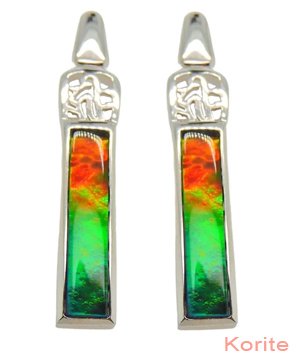 Fine quality ammolite can be obtained from several excellent Canadian sources. The earrings here are from the Korite website. Be very careful about sourcing fine quality ammolite from places like Etsy or eBay, or from Far East sources. The only place in the world that produces fine quality ammolite gemstones is Canada and all of the reputable dealers I could find have verifiable connections to that source. Double check before you buy. Also, the ammolite color layers can be quite thin and require a quartz or other transparent gem material as a cover layer to protect the ammolite gemstone. Therefore, you will usually find ammolite sold as doublets or triplets for this purpose, which is perfectly acceptable but should be disclosed at all market levels.

Since Korite mines 90% of the world’s ammolite production, I turned to them to get the details on quality grading and availability of ammolite. The grading system below is from the Korite.com website and depicts the steps in quality and value of gem quality ammolite. Consider that only 3% to 12% of Korite’s production is of grades AA or AAA, so the finest quality ammolites are rare, indeed. The following is from Korite:

GRADE A
BRIGHT COLOURS
Matrix lines can be present
2+ COLOURS

Gemological Properties
Source: Ancient inland sea bed in Alberta, Canada.
Chemical: Mostly aragonite from ammonite shells with a variety of trace elements possible.
Formation: In sedimentary deposits containing shells of ancient sea dwelling cephalopods that were transformed under intense heat and pressure.
Crystal System: None. Organic
Unusual Properties: Iridescent play of color similar to opals.
Colors: Entire rainbow of colors possible.
Wearability: Will be damaged by jeweler’s torch. Will burn/melt if subjected to heat. Wears far better as pendants and earrings than rings due to fragile nature of some pieces. 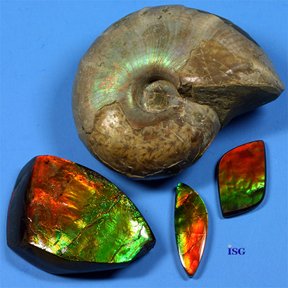 As with all our gemstone stories, the Story of Ammolite is far longer than we can cover here. But the above will serve as a portal to give you a wonderful insight into this amazing gemstone that was once part of a sea creatures shell when the dinosaurs ruled the world. Wearing a beautiful jewelry piece with ammolite is literally wearing a piece of the history of the ancient earth. If you stop to think about it – aren’t all gemstones just that?