Picture the scene – like something from the old Wild West. As you enter the rough and tumble gem mine in Colombia in the 1980s, “every gem mine owner had on his desk a bottle of whiskey, a gun, and a prostitute behind him,” according to Ron Ringsrud, who started visiting during that era. “Today, the mine owner is most likely a young MBA, drinking yogurt, meekly nodding ‘Yes, dear’ to his wife on the phone.” 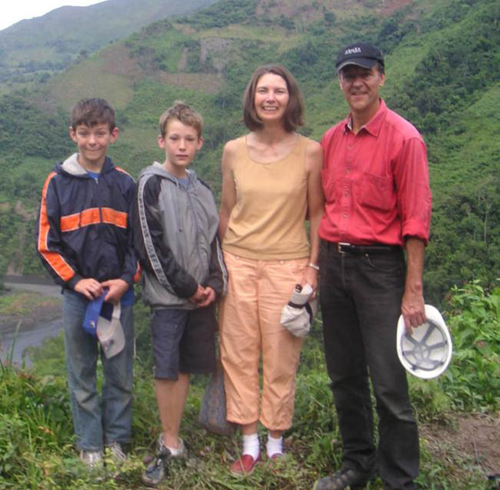 Rich Colombia is indeed a land of contrasts, ranging from magnificent emeralds (the best in the world), breathtaking scenery and a warm, spiritual people, to the seedy underbelly of drug trafficking and cartels.
Ron, recently elected to the Board of Directors of the American Gem Trade Association (AGTA), and with his new book, “Emeralds: A Passionate Guide,” about to launch, shared in this exclusive interview how his love affair with this colorful country began. (PHOTO Right: Ron and Linda Ringsrud with their twin boys on a visit to Colombia.)

“I had spent some time living in Colombia right after college and knew a bit of Spanish. Returning home to L.A., in need of a job, I serendipitously responded to a newspaper ad for a warehouse box mover at GIA (Gemological Institute of America). After three months, they told me I could take GIA courses for free. As I quickly progressed through the courses, I started getting better jobs there – selling tweezers and microscopes.” Soon, Ron had a Graduate Gemologist (GG) degree.

When Ron noticed in a magazine that Colombia had the best emeralds in the world, a spark ignited. “I already had the connections.” His first gem-buying expedition to Colombia was an adventure. “It was 11 hours by jeep from Bogota to the mining district. The hotels had more stray dogs than humans.”

“The mines are very shrouded and closed. The locals want to know who you are, who you know, who you’re with. You don’t enter without their invitation.” Luckily, the locals warmed to this gringo who knew their language and was genuinely interested in developing relationships. He wasn’t there just to buy and leave. He got a few small stones. And so it began.
“The colored stones business is great. Each colored stone has immeasurable qualities – fire, life, transparency and play of color – that make it unique. Arriving at the price of a colored stone requires old-fashioned, low-tech, face-to-face negotiation. This keeps the business lively, charming and very human.

“The main mines are Muzo, Cosquez, and the newest, La Pita – since 1999 the rising star. La Pita has yielded $100 million a year for five years, suddenly making rich and powerful men out of young miners and investors. New visionary, clear-headed business leaders are emerging, with greater environmental and social awareness.” 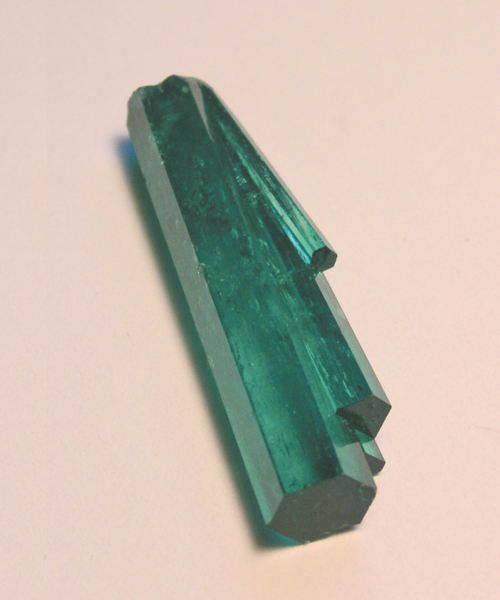 17 carat emerald crystal from the La Pita mine in the Muzo region. Collection of Cal Graeber; Photo – Ron Ringsrud.

Ron has been selling at the annual Tucson Show for years (Ronald Ringsrud Co., http://emeraldmine.com). His business took a quantum leap in 1986 when he published his first article in Gems & Gemology magazine on the Cosquez mine. Suddenly he had an established reputation, a different level of clientele. Today a leading industry expert, Ron’s most recent article in Gems & Gemology describes the “gota de aceite” or “butterfly-wing” emerald, a highly prized specimen only found in Colombia.

As a young, single entrepreneur, Ron enjoyed the risks of exploring an edgy, emerging market. Today, as a premier emerald dealer, Ron sells to top dealers and jewelers and provides specimens for collectors. His most expensive sale was a 12 carat stone for $120,000. He sometimes takes his wife Linda and 13 year-old twins to visit this land he loves. “I’m proud to be able to support my wife, a full-time mom, and boys from my profession.”