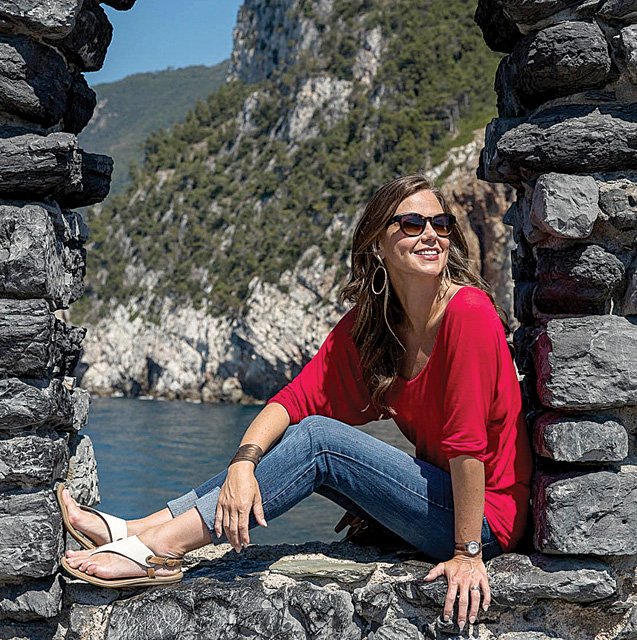 Barbara at a photoshoot for Celebrity Cruiseline wearing an Oris watch. She and her husband have modeled for their ads and commercials since 2014.“I’ve been lucky enough to have flown an airplane with daredevil pilot and Red Bull Air Race champion Mike Goulian, to have golfed with 2018 Masters’ champion Patrick Reed, and to have driven in an all-female vintage car race from Paris to Spain and back up to Biarritz on the coast of France. There are days I wake up and pinch myself, truly. I’ve worked in just about every genre of our industry in the last 23 years, but I’m finally doing what I always wanted to do: tell the industry’s stories. I’m living my dream and getting paid for it.”

I recently sat down with freelance industry writer, journalist, and speaker Barbara Palumbo, best known for her popular blogs Adornmentality.com and WhatsOnHerWrist.com, as she wove her own story.

Mia Katrin: “It’s great catching up again. What have you been doing recently? What’s on the horizon?”

Barbara Palumbo: “I’ve been writing for publications such as InStore, The Jewelry Book, Watchonista, Modern Luxury’s Atlantan, and this year I wrote a children’s book with Oris about the value of time. I’ve also been speaking a lot about Federal Trade Commission laws for influencers as well as about women’s issues in the jewelry industry. Some really special multimedia projects are coming up, but I can’t talk about those just yet.”

MK: “Speaking of ‘influencers,’ what exactly is an ‘influencer’? It’s a new niche. Do you think it has a future?”

BP: “In terms of the current lexicon, it refers to someone with a solid Instagram, YouTube or other social media following who mainly focuses on one genre. But anyone can purchase followers these days so it’s tough to know who exactly has real influence. There are several self-proclaimed ‘experts’ out there who take money or gifts from brands or stores without disclosing when they do, which breaks federal law. The next couple of years will be interesting. While influencers won’t go away, the world could become so inundated that people may be turned off.

MK: “It’s a bit tricky, because there are editorial writers like you who tell the stories of jewelry and watch brands without taking payment for covering them, and advertorial writers who feature brands for paid sponsorship. Since you’re not compensated by brands you feature, how are you able to make what you do profitable?”

Barbara with world renowned watchmaker Maximilian Büsser at Robb Report’s Car of the Year event in Boca Raton. Photo courtesy Robb Report.BP: “I’m paid by the publications for which I write and for the occasional speaking gigs I take part in. I’m also paid for any ghost-writing or content work I do. There are a handful of trade shows that will cover my airfare and/or housing because they would like for me to attend in order to keep their exhibitors in mind for future articles, but I’m never compensated financially if I attend.”

MK: “Speaking of trade shows, you really get to experience some exciting international shows!”

BP: “I do, yes. I attend the Salon International de la Haute Horlogerie in Geneva every January (whenever I’m lucky enough to get an invite). I also attend Baselworld every March. I’ve had the privilege of attending both Italian editions of VICENZAORO as well as their Dubai edition and I get to go to several of the U.S. shows. But I’m also really excited to be headed to London soon for something special in relation to watches.”

MK: “Some of your favorite brands?”

BP: “For jewelry, Chopard, because they’re going ‘green’ in their practices, and Coomi, because I adore her jewels but also her spirit. But there are so many others whom I favor. For watches, my absolute favorite would have to be Jaeger-LeCoultre.

MK: “Tell us about your family, your hobbies. What do you do for fun?”

BP: “My family’s wonderful. My kids are their own people. They have different talents and skills. I could not have asked for a better brood! My husband’s a fantastic father to them and takes great care of them when I’m away. In terms of hobbies, I enjoy yoga, my music, watching or playing most sports, and I absolutely love to cook. But I adore travel the most. Whether it’s local or international, I can find something special about every place I go. Travel opens our minds.”