If you are running a business, you better know there is a big difference between profit and cash-flow. Though they seem similar, they are not, and you run the risk of putting your company in dire straits if you can’t tell them apart.

Much as I don’t want to hit you with a lot of accounting speak, there will be some, but I promise I will try and keep it to a minimum!

Let’s start with a simple analogy… say an $800 weekly household budget. Included are likely to be allocations for groceries, cleaning and other similar stuff needed to run your household, plus, that which is needed for utility, telephone and other such expenses.

Suppose you lump the money together and spend as you would without apportioning the amounts. A little extra here and an indulgence there and you are likely to end up overspending on the other household stuff with little left over at the end of the month to pay the electricity, heating and other bills which are due.

This exact scenario can easily play out in your business if you are just as lax. The language used may be different, but the conclusions are the same. If anything, it is riskier as the sums involved are much greater.

So, moving into business mode, and with the help of some terms, we present a similar scenario with a company that has made gross sales earnings of $100,000. The 2 perspectives are presented in the chart for a comparison of how they may play out.

Example 1 (below) shows how the company might allocate and spend the money earned according to standard accounting rules, and which results in a Net Profit of $1,715.

In actual fact however, Example 2 is what has happened in terms of cash flow. Instead of a profit, there is a gaping $13,285 shortfall, which may well require the company to opt for overdraft facilities. 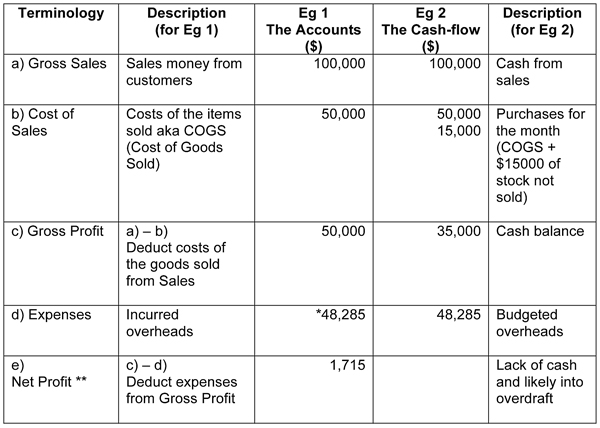 * On average, US jewelry stores break even or lose money 9 months of the year.

Jewelry retailing is especially vulnerable to these sort of situations as it is a cash-based business with settlements not due until 30, 60 or even 90 days later.

The keys to avoid becoming stuck in such business dilemmas is to maintain cash flow projections and to segregate and allocate. This is done by staying ahead of your cash flow requirements and separating the inflows from the get go, into two piles – one for stock and the other for expenses. Knowing what you need to pay for before you go spending on unbudgeted items is half the battle. In other words, plan, plan and plan your expenditure!

By doing so, you will be on top of your profits and cash flow, have a lot less money angst and a lot more cash in the bank for your well-earned creature comforts.

David Brown is President of the Edge Retail Academy, an organization devoted to the ongoing measurement and growth of jewelry store performance and profitability. For further information about the Academy’s management mentoring and industry benchmarking reports contact Carol Druan at carol@edgeretailacademy.com or phone toll free 877-569-8657.

David Brown is the President of The Edge Retail Academy (sister company of The Edge), a jewelry business consulting company that provides expert advisory services to help with all facets of your business including improved financials, healthier inventory, sales growth, staff performance, retirement/succession planning - all custom-tailored to your store’s needs. By utilizing the power of The Edge, we analyze Key Performance Indicators that point to current challenges and future opportunities. Edge Pulse is the ideal add-on to better understand critical sales data and industry market trends to improve profitability. It benchmarks your store against 1200+ other Edge Users and ensures you stay on top of industry stats. 877-569-8657, ext. 001, Inquiries@EdgeRetailAcademy.com or www.EdgeRetailAcademy.com.