Selling wholesale may not be wholesome

It has become commonplace to buy in bulk here in America.  Wholesale clubs like Sam’s Club and Costco are popping up all over the landscape and consumers are readily stuffing over-sized boxes of Cheerios and 5-gallon drums of mayonnaise into their massive buggies all in search of bargain prices.

Paying retail is simply passé.  Why would anyone agree to pay the MSRP when you can get more for less at a store that sells bulk volumes at bargain prices?  It’s a craze that the jewelry industry is not immune to and it has many jewelers offering their wares at “wholesale” prices and customers looking for bigger, better, bargains on their baguettes.  And while it is understandable that retail jewelers would look for an edge to make their store and their prices more appealing to customers, most don’t realize that selling “wholesale” is illegal in many states.

Suzan Flamm is an attorney with the Jewelers Vigilance Committee (JVC) in New York.  She served as a prosecutor in the Manhattan District Attorney’s office and in private practice before joining JVC in January of this year.  Now she, along with JVC, serve to help the industry cope with the ever-evolving political and legal landscape on which it finds itself operating.

It can be terribly difficult for independent jewelers to stay abreast of the continually changing statutes that are passed into law.  JVC, a non-profit organization, has made it their purpose to stay up-to-date with new legislation and then pass on to their members what that legislation means for how they run their business each day. 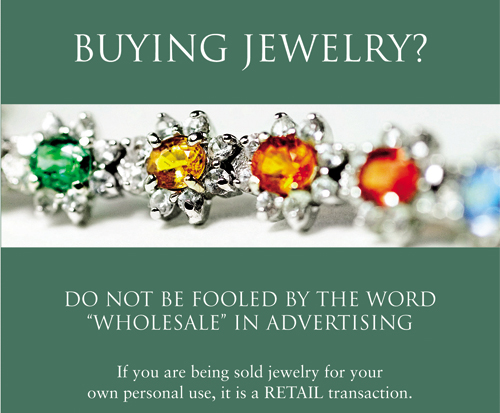 A brochure published by JVC for jewelry shoppers states: “Many states… have strict laws prohibiting the use of the word wholesale in retail advertisements.  In some states this is a criminal offense, due to the word’s ability to mislead consumers.  If a jeweler advertises as selling at wholesale prices, they must sell at the wholesale price.”

In short, JVC is trying to educate both jewelers and their customers to the legalities of selling to end-user customers.  And this is just one area in which JVC is trying to empower jewelers.  In addition to helping jewelers be compliant with new legislation and rulings, JVC can also serve as a mediator in disputes that arise within the industry.

Whether it is instruction on sales ethics, anti-money laundering compliance, mediation between feuding jewelers or educational materials for customers, JVC can provide tremendous support for independent jewelers.  The Jewelers Vigilance Committee can be reached at 212-997-2002 or found at www.jvclegal.org.