The Story Behind the Stone: Still going green – the Zultanite way

What if you could actually have it all – you could offer a gemstone that is rare, gorgeous, untreated, and with a naturally occurring color-change phenomenon? On top of that, you could honestly explain that it represents the vanguard of responsible mining in such a nuts-and- bolts way that your customers could actually understand what going green means? Maybe you can have it all – with Zultanite.

The push for ethical mining, fair treatment of miners, concern for the ecology and decent wages is a recurring theme in the jewelry trade that gained fierce momentum after the film “Blood Diamonds” heightened global awareness about abuse in those areas. That’s a noble cause and was worth publicizing in order to support a turnaround in a market where fair trade was not previously taken into account.

But good news on the other hand, is tantamount to no news, generally speaking. Because where people have been doing the right thing when no one was looking is not the stuff of headline news.

But one company who operates with social responsibly has been going quietly about their business way off the radar screen for years. Zultanite, LLC, owned by Turkish jeweler turned mine owner Murat Akgun, had never heard the phrase “ethical mining” until he participated in trade shows in the US. But he didn’t need to. “How else would you do business?” Akgun shrugged, after learning about this “big wave” in the US. Green practices were woven into their brand years before the phrase became part of the jewelers’ lexicon.

By conducting business in a transparent way with accountability to the local residents who work there, Akgun has elevated the standards of operating in Turkey by example – in a nation where companies routinely under-report their workforce to avoid properly paying into the social security program that would have rewarded those hard workers later on in life. 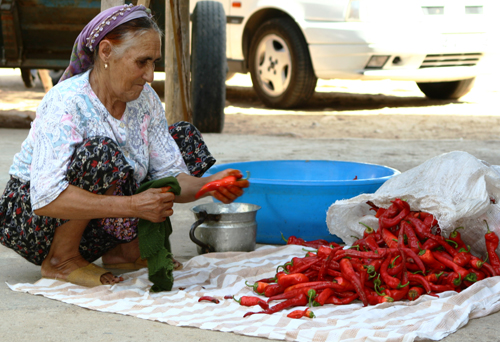 Akgun’s company provides free housing and meals on site, and free transportation for workers living in the nearby town. The pay well exceeds what those miners could earn elsewhere, yet Akgun feels it’s fair. And the regional benefits provided by the Zultanite mine are tangible. Road improvements to this rural district have helped the agricultural community especially when transporting their olives for processing. And the nearby village, where many workers come from, also benefits from Zultanite, LLC who rents their equipment and trucks. Food, water and other provisions for the mine are purchased from the village. When the nearby mosque needed a roof over its head, Zultanite donated the bricks.

Consumers and jewelers alike are interested in supporting green efforts, but at the end of the day, shoppers still want a gorgeous jewel to wear; and the rarer the better. Zultanite delivers on all counts. 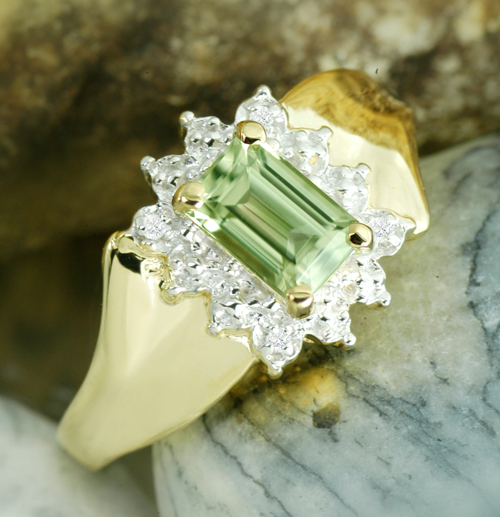 Zultanite is an exclusive gemstone-quality transparent diaspore found in only one location; the southern Anatolian hills of Turkey. Diaspore in itself is not so rare and was identified in the early 19th century hidden in bauxite (aluminum) veins. What is astounding is that for the first time since its discovery, one of these veins produced a transparent gemstone with a phenomenal aspect to boot. In natural daylight, Zultanite is kiwi green, but it transforms into a soft raspberry-brown under incandescent lighting. Obviously as with any natural stone, a range of pastel greens and cocoa hues are seen in this gemstone.

No treatment has been performed on these rare gems to induce Zultanite’s phenomenal color change effect. Another one-source jewel, Tanzanite, is enhanced to improve its color. As gemstone treatments become increasingly sophisticated, this crucial aspect is a powerful selling point. In contrast to Alexandrite, a dark toned color-change stone; Zultanite’s colors are soft pastels providing a broader appeal to jewelry lovers. (PHOTO ABOVE: An oval brilliant cut Zultanite and diamond accent ring seen in daylight revealing its lovely pastel green hue. Image courtesy of Zultanite, LLC.)

Other elements contribute to Zultanite’s rarity besides its coming from just one source. Miners dig through very hard bauxite in search for Zultanite, and in some weeks, little if any harvest results from their effort. Furthermore, owing to its unique crystal properties, the finished stone may represent only 2-3% of the size of the original rough. So, large specimens are exceptionally uncommon.

Many companies rely on gigantic marketing endeavors to secure a dominant place for their precious stone. Zultanite’s proprietors have no such mechanism pushing their jewel to the forefront. What they do have is an exemplary model for ethical mining, a genuine concern for their workers and a dazzling gemstone that can only be found at their mine.

Someday, when this stone’s exposure has been maximized, it may be difficult to get top-quality Zultanite in large carat sizes. Until then, here is an opportunity for designers and retailers to treat their clientele to an exceptional stone. Zultanite is a perfect fit for innovative couture designers who cater to savvy collectors that demand exclusivity and beauty. No wonder International Colored Gemstone Association (ICA) declared this appealing jewel to be, “A real Turkish delight.”