The Story Behind the Stone: Precious little

Shoppers at Tucson GemFair and other trade shows this year gave us a glimpse into where the market may be headed by resourceful merchants aiming to offset sluggish sales. Several exhibitors at these trade shows servicing all ends of the market voiced the same scenario. Sales were good in the bargain box and the super-upper tier. Everything in between was pretty much stagnant.

The busiest booths at Tucson had off beat or undiscovered gemstones. Maybe the prices weren’t high, but interest was; because the more exotic stones that have yet to make a household name for themselves stand a pretty good chance of drawing in that customer who can turn a blind eye to the more well-known when it comes to jewelry these days.

One rarity orbiting the gem world in the last few years is a member of a recognizable gem species – the beryl family. That’s emerald, aquamarine, heliodor and others. Within that sub-set lies red beryl, just waiting for someone to make a big deal of it. 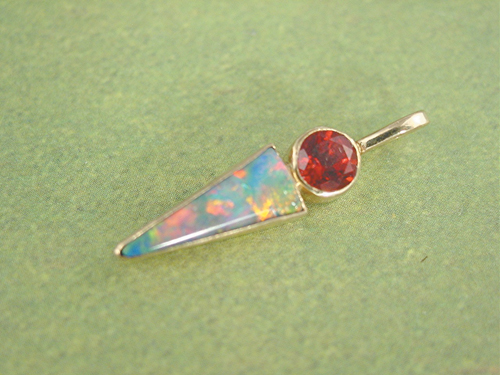 Red Beryl is officially named Bixbite, yet more often it’s referred to simply as red beryl. It is rare in occurrence in nature, and oddly enough also in its source. Those that do know about it understand that the Wah Wah Mountain range in Utah is the site most associated with its deposits, although a couple of other places in the US have produced a bit of it. Its discovery a century ago makes it a relative newcomer in the beryl family. The gem is thought to develop along fractures in the host rock. Still, you are most likely to get small finished stones of under .50 carats, although larger goods occasionally appear on the market.

Brenda Reichel, owner of Carats and Karats Fine Jewelry says, “I’ve loved the color of red beryl since early 1978 when I first saw that bright cherry red color. It’s such a rare and hot electric pinkish red – often like fuchsia pink!” Reichel keeps red beryl in her personal collection including a marquise stone.

The crystal sizes of red beryl are always small in contrast to other beryl, and so jewelry made from this material will contain small carat sized stones. The best use then is for solitaires where the stone tells the story of its rarity, or clustered in a designers’ tour de force. Some of it can be very pricey due to its transparency, quality and saturation of red. But not all of it on the market is priced out of reach. These gems present opportunities to entice your clients with rare stones. Thy are American-origin rarities to boot and you can price them attractively for our times.