They say in Texas everything is bigger. John Green, owner of The Jeweler in Georgetown, Texas agrees.
His reputation as a high quality, experienced jewelry tradesman is driving so many people through his doors that he’s recently outgrown his retail space. What’s his secret to success? Going blue.

Many small business owners long to obtain high end customers. They invest their time, money and merchandise toward the upper echelon of customers. For many this approach is successful. But John Green takes a different path. “I have built this business by being available, honest and just plain old hard work. We strive to have quality merchandise and have something to offer all of our customers. If we don’t have it, we can get it.” His focus has, and will be, on the blue collar customer. “I am so proud when my customers refer their friends and family.”

Maybe it is John’s childhood experiences that drive him to focus on this consumer group. His exposure to fine jewelry started when, as a teenager, Mr. Mosbacher, a local Pennsylvania jeweler, saw a spark in him. John earned money by working in their yard and cleaning their pool. When he finished his work, Mr. Mosbacher would teach him something new about fine jewelry. 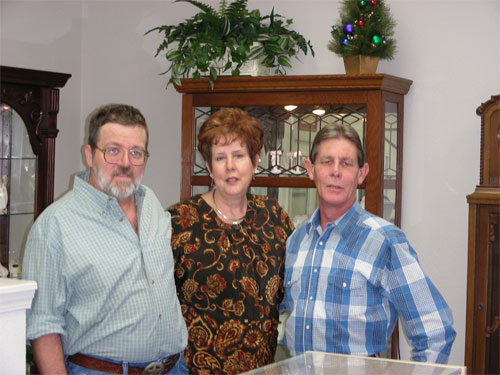 The Jeweler’s winning team (l-r): John Green, his wife, Janet and Mark Ballard.
John and Mark have a combined 73 years of experience on the bench.

When John’s genuine love for the art of jewelry became apparent, the Mosbacher’s sponsored him at Bowman Jewelry School. The couple was proud to see him graduate and equally excited about hiring him in their store.

Upon Mr. Mosbacher’s retirement John headed south, landing in Florida, and later in Texas, working in different trade shops and for many established jewelers. He spent 15 years in the retail jewelry business in Round Rock, Texas with his wife Janet, and trade work continued to be a large part of what he did. After careful consideration, John decided to focus on that alone.

“After 15 years, I closed my retail store. I was tired of the retail side of the business and knew I had plenty of trade work to sustain me,” said John.

His break from retail lasted a brief couple of years until his longtime mentor and friend Bob DeWitt started suggesting John open a small repair shop. After several discussions John agreed to jump back in, but only for repairs. His small shop of 485 feet opened in an inconspicuous location in the back of the complex. John recalls: “Literally it was me, my repair tools and two counters. That was it. The shop didn’t even face the main road.”

Although his goal was to handle repairs only, his customers had different plans.

Today John Green’s store has been forced to expand. He moved into a space at the front of the complex, and now has 1400 square feet and fifteen showcases. Business growth dictated that John hire someone. Eighteen months ago Mark Ballard of Tyler, Texas joined The Jeweler team bringing with him thirty years of experience, and the partnership has worked out beautifully. “Hiring Mark was one of the best business decisions I’ve made and together we have a combined seventy three years at the bench. It is as if we’ve known each other for years,” states John.

Former customers from across Texas continue to seek out John, driving him farther into the retail arena than he imagined.
“We are known for our repair business, but we’re also recognized for the diverse merchandise we carry. I have a passion for colored stones and we have one of the most extensive selections in town. Not to mention the unique designs we carry. I don’t believe in buying standard pieces for my store.”

Whether he wanted to expand into a full service retail store or not, John’s store now sources bridal merchandise, upscale watches and custom pieces. “Jewelry is about memories and we are thankful to our customers for letting us be a part of those memories,” states John.

Every morning as the man who wanted ‘out of retail’ cuts the lights on in his fast-growing retail store, his wife, Janet, has a little fun by saying, “I’m so glad you wanted to get out retail.”

You can contact John Green at The Jeweler in Georgetown, Texas by calling 512-868-2228 or visiting their website at www.thejewelerofgeorgetown.com.