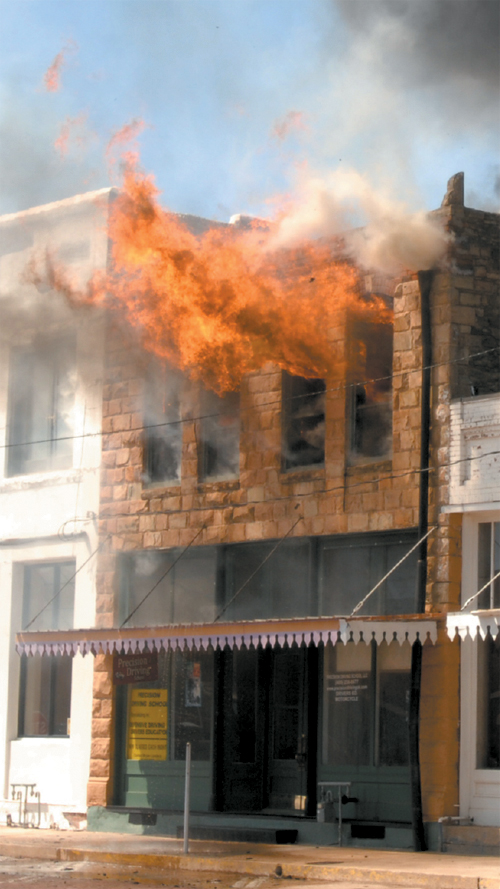 “Friendly fire.” A friendly fire is the one in your fireplace, in your patio grill, or gently flaming from the end of the torch at your jeweler’s bench. But friendly fires can sometimes become not-so-friendly – and quite suddenly. This photo was taken on a weekday at 1 pm, just a few blocks from a fire station – and yet before the first firefighter arrived on the scene.

One of the important benefits of shopping at Perry Dough’s jewelry store was the fact that design, manufacture, and repair were all done on premises. Perry had a complete shop in the back of his store operated by skilled craftsmen Larry, Curly, and Moe.

One day as Larry and Curly were collaborating on a technical repair job, Curly failed to carefully nest the jeweler’s torch in its holder. It fell into a trash can that was next to the bench and immediately ignited its contents of paper and oily rags.

In no time at all, the flames were climbing the walls and reaching across the ceiling, and smoke was pouring into the front of the store. There was barely time to alert Perry and the rest of the store personnel that it was necessary to immediately vacate the premises.

By the time the first of several trucks arrived, the entire second floor of the building was engulfed in flames fueled by boxes and other things that were stored there. Soon it was determined that the fire was so far along that fighting it became more an issue of preventing the spread of the fire to other buildings; Perry’s store was lost.

Own or Rent?
We will deal with two possible scenarios here; Perry either owned the building that his store was in, or he leased it from another party.

Situation 1 – Perry owned the building, and he had it insured.

Two coverage questions would immediately come to mind – what kind, and how much!

Perry had bought his building five years ago at a price that was comparable to other buildings which were for sale in his community – $85,000 – and that is the amount for which he insured his building. He had been told by others that it was important to have a policy that provided “replacement cost coverage,” and so that is what he asked for and what his agent provided. He was about to find out how good that coverage was – or more accurately, how smart his decisions had been about insurance.

The replacement cost clause of an insurance policy states that the insurance company will pay to either repair the damaged property (in this case, the building) – or replace it with like kind and quality. Repair was out of the question; Perry would need to rebuild. Thank goodness for replacement cost coverage!

Problem: The building was 3,000 sq. ft. and it was determined that to rebuild something similar “of like kind and quality” would cost $90/sf in Perry’s town, at current prices for labor and materials. A new building would cost more than a quarter of a million dollars.

True, the policy was prepared to pay the cost of replacing the building – but only up to its limit of coverage. Perry was $185,000 underinsured.

The mistake that was made was in confusing market value with insurance valuation. One is determined by comparing a particular piece of property with selling prices of similar properties in the same area. “What would the building sell for?” Perry had used his own purchase price as his guide for insurance coverage.

But the cost to rebuild a structure from the ground up is not determined by local selling prices, but by the costs for lumber, steel, concrete, and other building materials – plus the human costs for skill and labor in designing and constructing a new building. These are the issues that Perry should have considered in setting the coverage limit of his policy.

How would a jeweler know these factors? If a person needs advice on a diamond, who better to ask than a professional jeweler? For advice on building costs, a construction contractor may be a good resource for a reasonable cost per square-foot estimate, considering also any particular features such as a vault, elevator, or the additional costs of meeting current “person-friendly” standards (e.g., upgraded special restroom facilities.)

Your insurance agent may also be a valuable resource as he or she usually knows your building and your specific needs, has experience that comes from dealing with other losses, and may have access to tools or resources that aid in estimating regional construction costs.

Additionally, your insurance company may be willing to send an expert to evaluate your building for both replacement cost and actual cash value – perhaps at little or even no cost to you.

Regardless of how a value is determined, the setting of the limit of coverage is the responsibility of the insured.

Situation 2 – Perry was a tenant.

For the second illustration, we will presume that Perry occupied the building under the terms of a lease, which made certain requirements of him. Therefore, while Perry insured his own business contents and also carried a Jewelers Block policy to cover his jewelry inventory and customers’ goods, he not surprisingly had zero coverage on the building.

Nevertheless there was a requirement in Perry’s lease that he maintain a certain level of liability insurance, and that such policy name the landlord as an additional insured. [Liability insurance covers damage done to others in the form of property damage and/or bodily injury, as a result of the insured’s negligence.] Perry had $1,000,000 liability coverage, and his agent annually provided a Certificate of Insurance to the landlord to prove compliance with that portion of the lease.

Why would Perry’s insurance coverage be an issue to the landlord? If a customer tripped over a step inside the store and were injured, if a brick fell on a person from the face of the building, or if something else in the building failed and caused either personal injury or property damage, the landlord might be also named in any such claim – and the landlord wished to have protection under the tenant’s insurance policy.

Another reason for the lease requirement is that the tenant might negligently cause a fire which damaged other property – such as the rest of the building (if the lease is for only a part of a building), or neighboring buildings or businesses.

Insurance Technicality: Liability insurance covers damage to property of others; it does not cover that which is in the insured’s direct care, custody, and control. This means that property which is owned, rented, or leased to the insured is not covered under the Liability limit of the policy. Specifically, Perry’s building was leased to him and was therefore in his “care, custody, and control.” So while his limit for liability coverage could be applied to parts of the building that Perry did not lease (if there were any) and to the property of neighboring businesses, it did not cover the building that was his jewelry store.

Wouldn’t the landlord have coverage for his own building? Probably. So let’s look down the road a bit: the landlord turns in a claim to his carrier, Standard Fire of Puerto Rico, who pays the claim and rebuilds the building. But SF of PR then goes to the subrogation clause in the policy, which gives the insurance company the right to seek recovery from the proximate cause of the loss.

The cause of the fire was deemed to be Perry himself – who operated a jewelry shop with a trash container located below an open flame – which contained oily rags; plus since he owned the business and was ultimately responsible for the careless (negligent) acts of his employees, Larry, Curly, and Moe – who dropped the torch, which ignited the trash, and the rags, which burned down the building.

Good News/Bad News
The good news is that there was coverage in Perry’s policy that he didn’t know about. Though his liability limit of $1,000,000 could not be applied to the building he leased and was being sued for, there was a specific limit in the policy for “Fire Legal Liability” insurance. Fire Legal is a provision in the policy which extends coverage to property which the insured rents or leases, when a fire is caused by the insured.

Perfect! That is just what happened. The building was leased property; the damage was from fire; negligence had been determined to be on the part of the insured (Perry).

The bad news is that the coverage limit had never been specifically discussed and so the policy stated an “automatic limit” of just $50,000.

Solution: If you are leasing your premises, consider that you may still be held ultimately responsible for damage to the building even though you do not own it. Examine your policy for any limit it may have for “Fire Legal Liability” (or similar name) to see that it is adequate. An automatic limit that a standard policy provides may not be sufficient to replace the building you occupy if a negligent act on your part damages or destroys it. Speak to your insurance agent if a correction is needed.

Bonus Question: Suppose Perry, as building owner, had carried replacement cost coverage at a proper limit of $270,000 – but decided after the fire not to replace his building but to purchase another building for a cheap price – or just retire.

Answer: The replacement cost limit is provided only if actual replacement (rebuilding) occurs – whether or not it is on the same site. If the building is not replaced, then the coverage reverts to actual cash value and the insurance company is obligated only to pay “replacement cost less depreciation,” as defined in the policy.

Bob Carroll of Robert G. Carroll and Assoc. is a Certified Insurance Counselor who has provided exclusive insurance services to the jewelry industry for more than 25 years, representing Jewelers Mutual and other qualified carriers in Arkansas, Oklahoma, Mississippi, and Tennessee. He may be reached at bob@robertgcarroll.com.