Paula Crevoshay is a modern day magician. Like a wizard of ancient lore flourishing her wand, she transforms the natural world of magnificent flowers and creatures into their celestial counterparts fabricated of sparkling gems and precious metals. The “Queen of Color” paints with light, the full spectrum of light embodied in rare gems of every hue of the rainbow. From exotic toucans to golden-tail sapphire hummingbirds and delicate orchids, her magnificent objets d’art appear in museums world-wide, from the Smithsonian to the Carnegie Museum in Pittsburgh and the Musée de Minéralogie in Paris. Over four decades she has garnered an elite echelon of avid international collectors, from private clients to top-tier institutions including GIA (Gemological Institute of America) and Yale Peabody Museum.

I was delighted to meet with Paula recently at her booth at AGTA GemFair in Tucson, where she has exhibited since the early 1980s, one of the founding core of exhibiting designers. Entering her booth you are immediately transported into her world, an enchanted bubble of bliss flooded with creativity and imagination.

Crevoshay speaks the language of nature. “I can hear the stones speak,” she reveals. “I understand their language.” She describes her process of creative inspiration. “I almost always start with the center stone. I don’t buy it unless I know what it will be, what it wants to become.” Once she has the center stone she draws on her immense reservoir of knowledge based on four decades of gem collecting – including years in Sri Lanka, India, Tibet and other areas of Southeast Asia – her immersion in art history – she has an MFA in painting and print making – and her deep knowledge of gemology and mineralogy. “I have a bio computer in my brain. I have a photographic memory of color. I’ve extensively studied the history of art, gemology and mineralogy. This stockpile of information is what I draw from. I start with gemological and mineralogical clues. That’s my nature. That’s my signature. Since the beginning, I’ve left clues in my work.” 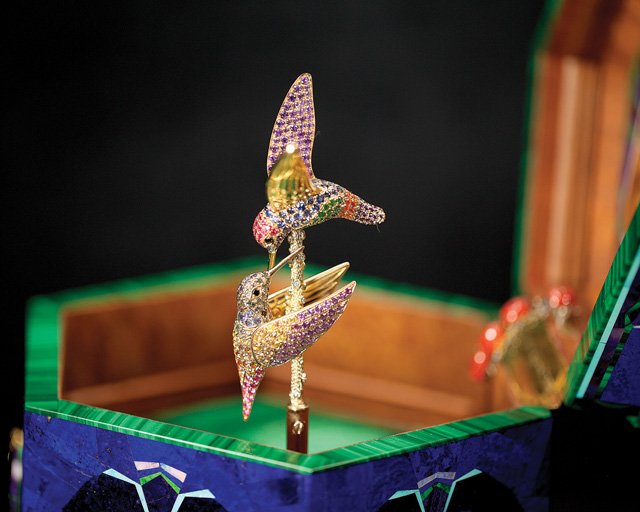 Crevoshay draws profound inspiration from her collaboration with lapidary artists, including her late husband, George Crevoshay, as well as master gem carvers such as Lawrence Stoller and Glen Lehrer, whom she has worked with for decades. “With all talented souls, there is a flicker of insight, talent and genius. It’s the abstraction found in gem carving that breaks the bondage of symmetry in classical cutting into a new art form – lapidary art. When I behold such a piece of art it sometimes takes time for it to reveal what it is saying, what it wants to be, what it wants from me. It wants to be liberated, set loose from its box to become a fabulous masterpiece that’s going to inspire the next generation.”

Like Michelangelo, one of the great masters throughout the ages who have inspired her, she embodies the Renaissance ideal, fusing knowledge of science and art. “I draw inspiration from artists in every field.  There’s not a culture that has existed that has not influenced my work, from Etruscan to pre Colombian to Aztec.” Crevoshay’s currently preparing her upcoming third one-woman show, “Nature, Art and Science” at the Natural History Museum of Los Angeles County, which will highlight the interconnectedness of nature, art and science, telling the story through jewelry. Her second show “Illumination, Earth to Jewel” at the Musée de Minéralogie de Paris, revealed her deep interest in art and mineralogy, while her first show, “Garden of Light” at the Carnegie Museum in Pittsburgh  expressed the profound underlying connections of the mineral, animal and floral kingdoms.

Born in Louisiana where her father was serving a stint as a senior research scientist, Crevoshay comes from a family with deep Southern roots, in the Atlanta area, for generations. She attended Virginia Commonwealth University, graduating with honors and a full fellowship before entering graduate school at the University of Wisconsin. There she met and married her late husband George Crevoshay, who was completing his PhD in Buddhist studies and linguistics. Fluent in several East Asian languages, he was awarded a Fulbright fellowship for study abroad. When she was married at 22, they embarked on a four-year self-described “Magical Mystery Tour” where she immersed herself in Asian culture, sold some of her first paintings to the British Council for the Arts, and transitioned from painting to jewelry design, launching her jewelry designing career.

“I always wanted to be an artist, not a commercial jewelry designer. All my pieces are one-of-a- kind. Each client is unique, and the piece that is destined for them must be as unique as they are.” With her clear focus and steadfastness of purpose, she has been able to maintain the purity of her ideal spanning decades. She serves as an inspiration for other artists. “I want to let them know, ‘You can be an artist. You can remain true to your purpose.’ I want to broaden the path for those who follow during my watch. I also want to preserve the ancient fabrication techniques, such as granulation, which I have utilized in my work since the beginning. This is my legacy.”

Mia Katrin is an award-winning jewelry designer featured in over 100 top stores nationally. She is available for lectures and seminars. To add her Collections or book a lecture: www.jeweljewel.com, 877-539-3569, facebook.com/MiaKatrinforJEWELCOUTURELLC, subscribe to her YouTube channel ww.youtube.com/channel/UC2B-53XBuB_HD5-bofc5jAA