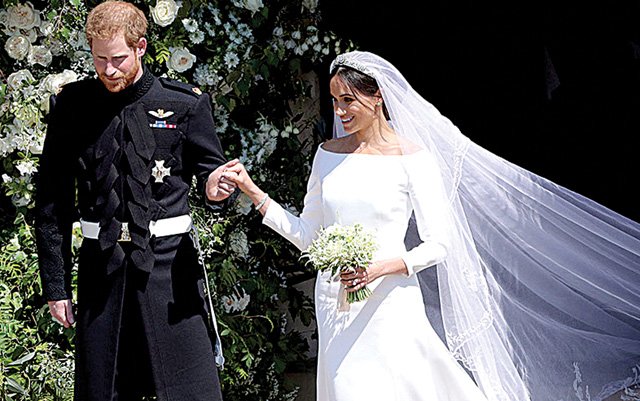 Regal. Modern. Classic. As Meghan Markle strode confidently down the aisle on May 19 in St. George’s Chapel to meet her Prince Harry and become Her Royal Highness the Duchess of Sussex she was making a statement with repercussions heard around the world.

With grace, dignity – and even sparkle – the 36 year old California native, a divorced, biracial, successful career actress, feminist and humanitarian was able to effortlessly navigate the intricate rituals of the thousand year old monarchy to join the royal “family firm,” helping transform it into a 21st century institution with relevance and appeal to the common citizen of the world. 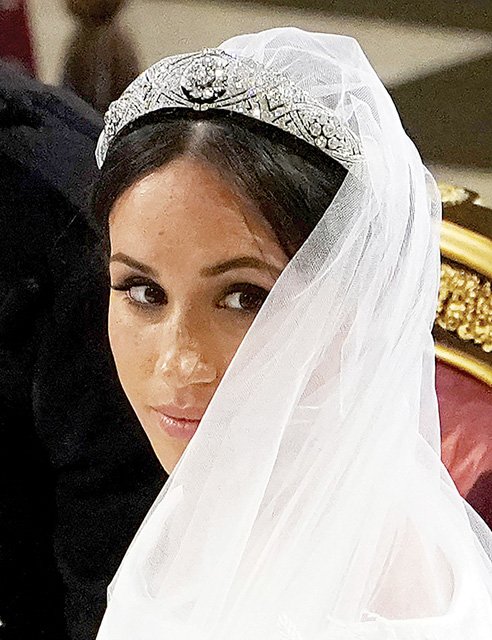 Meghan wearing Queen Mary diamond tiara.Every aspect of the meticulously orchestrated event was designed to incorporate “something old” with “something new,” maintaining the rituals steeped in tradition – St. George’s chapel itself dates from the 14th century and many royals including Henry VIII are buried there – while transforming them to appeal to a wider, more diverse, contemporary taste. The ceremony included a gospel choir’s rendition of “Stand By Me” and rousing sermon by American Bishop Michael Curry, the first ever at the royal chapel.

Meghan’s choice to walk down the first section of the aisle independently rather than being “given away” expressed her status as a successful, independent woman and is sure to influence future wedding protocol, causing us to view this traditional ritual in a new light.

Of course all eyes were on the wedding gown which Meghan helped design in collaboration with the first-ever female artistic director of the house of Givenchy, Clare Waight Keller. The magnificent silk gown with a 15 meter silk train was simple, elegant and regal, expressing the natural California style Meghan prefers and influenced by the minimalist style of icon Audrey Hepburn. The gown and train were designed with an oversize presence needed for maximum theatrical effect in the majestic chapel setting, an indication of the bride’s acting background and style savvy and cementing her status as a current fashion icon.

And nothing says royal like a tiara! Meghan’s choice when offered an array of crown jewels by Queen Elizabeth was Queen Mary’s diamond bateau created in 1932 with center brooch dating from 1893. At the ceremony the simple powerful lines of the tiara with the minimalistic dramatic gown and train created almost a Wonder Woman effect transforming the heirloom piece into an up-to-the-minute trend-setting classic.

It’s the Meghan effect. Like her sister-in-law Kate’s effect, it causes whatever dress or accessories they’re photographed in to immediately be sold out and is worth an estimated $1 billion a year in boost to the fashion industry according to a 2012 estimate. The “Markle Sparkle” combining Meghan’s overwhelming popularity, her iconic style sense and the international appeal of the American-British union could surpass even Kate’s drawing power. Sales of gold jewelry – the new bride prefers yellow gold – were up the first quarter of 2018 to the highest level since 2009 according to the World Gold Council, with further gains expected. 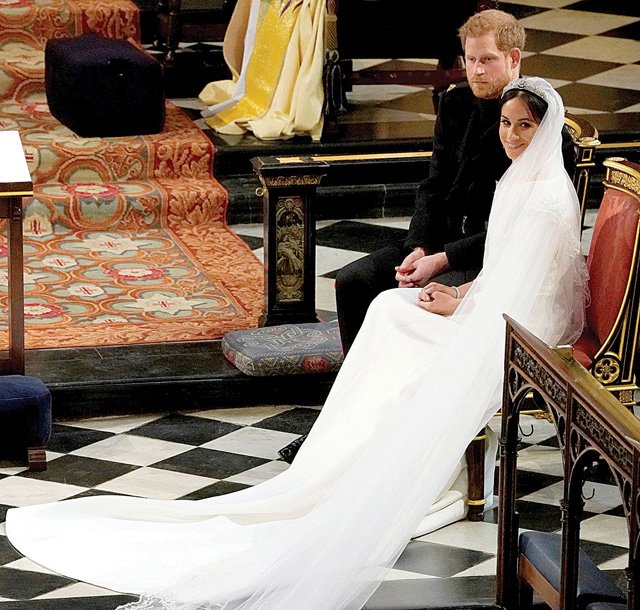 In today’s world so often dominated by doom and gloom headlines it’s refreshing to see this young couple, seemingly against all odds, united across cultures to connect in a deeply meaningful way, embracing together the purpose of helping humanity. May this newly minted royal couple continue to thrive and inspire through their example.