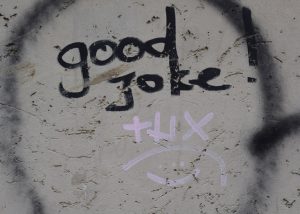 I’ve always been a big fan of April Fool’s Day. I’ve always liked to go big on that day and really try to fool people. I’ve been known to start the gag a month early just to get everyone sucked in so they never realize it was all a setup for a big April Fool’s Day joke. Then came April 1st, 2020 and nothing could top that one.

About a week before ‘the big day’ last year, the government ordered my business closed. I was like; “I see what you’re doing here Mr. Mayor. You like to go big or go home too. You set your gags up in advance, like I do.” Then, on April 1st, he didn’t jump out of a cake and yell; “April Fool’s. Ha Ha, I got you!” No, on April 1st, he actually issued the Amended and Restated Updated and Extended Safer at Home Extended Order. What a downer that was! Although I have to admit, he did pull off the big ‘got you’ with that one.

About a month or so later, they told us all that we could reopen our businesses within a week or so. That was good news, until they said you have to wait just a little while longer. Hah, April Fool’s again! Our mayor likes to go all out I discovered. So much so, that he pulled an April Fool’s joke in May.

When I questioned the mayor’s decision, he asked me; “What’s the date today?” Well damn, he had me there. Not only did I not know the date, I didn’t even know what day it was. It might have been a Monday in June, or a Wednesday in May, because we all lost track of time during the worldwide COVID shutdown. It very well could have still been April 1st and I just didn’t know it.

For all of my friends that own or work in the restaurant and hospitality industry, they got ‘punked’ by the government more than most. Once they were finally allowed to reopen, it was at 50% capacity as long as social distancing guidelines could be followed. Turns out, that is a lot trickier than it looks. Restaurants have tables and seating for 100% capacity. Where the heck do you store half of your tables and chairs? Most businesses use 100% of their space for doing business, not storing half your stuff. After a week or two of this, they were told they had to reduce capacity to 25%. When they asked why, the mayor said; “April Fool’s!”

Whew! They were relieved that the mayor was only joking. That was until they were informed that the April Fool’s joke was when he said 50% capacity.

Then they were told they had to close at 9:00 every night. When they asked why, the government said; “April Fool’s.”

In many states, the government closed all restaurants to indoor dining. But they could set up tents out on the sidewalk and people could eat outdoors…inside a tent. When the government was asked how this made any sense, they simply replied; “April Fool’s.” Now shut up, and get back inside the outside tent.

I remember the story of the lady in California who followed the guidelines and set up an elaborate outdoor/indoor tent in her parking lot. Then the governor even shut that down. Then the next day, the governor let a movie company move into the same parking lot, and set up about 25 tents just like hers, to feed their crew. When asked why one tent would kill people and 25 tents was perfectly safe, the California governor said; “April Fool’s.”

When informed that it was actually July, the governor replied; “Are you sure about that?”

Now, here we are, a year later, and April Fool’s Day is upon us once again. Only this year, we’ve got vaccines to distribute. Today the CDC said you still have to wear a mask even if you’ve been vaccinated. When asked why, they answered; “April Fool’s, now put on your mask.”

Then it got worse. They said if you’re over the age of 50, you can get a vaccine starting on April 1st, but only if you have underlying conditions, like being over the age of 50. You’re also eligible if you’re any age, but you must have brown hair, dyed is acceptable. You’re also now eligible if you are a natural blonde over 5’6” tall, but less than 6’3”. Or you wear a size 10 shoe and are willing to donate those shoes to charity, then you too can get a vaccine – but only if you have one green eye and one blue eye. So I questioned my governor about these confusing new vaccine guidelines starting on April 1st.

Guess what his answer was?

I hope everyone is staying safe out there and looking forward to the end of this crazy pandemic. It has certainly been a wild ride the last 13 months, but it’s about to be relegated to the history books. I look forward to seeing everyone again at all of the shows and conferences this summer and fall.

Happy April Fool’s Day to everyone!