The Story Behind the Stone: And the winner is… Moonstone!

Every year armchair designers and the real deal who labor hunched over a jeweler’s bench eagerly await the results of the annual AGTA Spectrum Awards competition. Sure the winning beauties are displayed at the next Tucson GemFair each year, but who wants to wait that long? 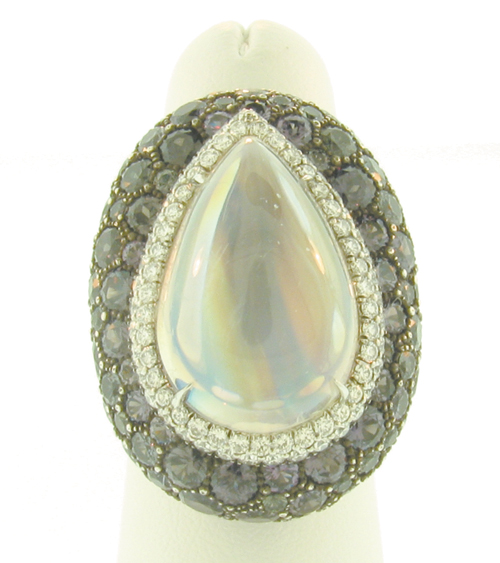 There was a bit of an upset at the last competition as far as most favored gemstones were concerned. Grabbing Best of Show and First Place Evening Wear was none other than the melancholy moonstone. We love em – those moody mellifluous stones most often polished en cabochon so as to lose none of their brooding luminosity.

Still it was a surprising turn in a competition where the sky’s the limit as far as pricey gems are concerned. Moonstone is not a big ticket item. Well, grandma said “Pretty is as pretty does” and there’s no denying that moonstone draws you in as if it’s going to whisper a secret in your ear.

based designer James Currens paired the most intriguing of stones – a jaw dropping 15.58 carat pear shaped moonstone encircled by several rows of none other than color change garnet. Yup, his confidently iconoclastic ring showed jewelry lovers a thing or two about what successful stone pairing is all about. Who would have thought – I mean who would have thought, other than Currens? Bravo for that brave combination.

Moonstone found favor in other categories as well, such as the bridal wear division where designer Evelyn Clothier, received Platinum honors for her platinum earrings featuring blue moonstone cabochons and diamonds. Michael Endlich from took  Manufacturing honors, business/day wear with his rose gold ring featuring a rainbow moonstone accented with two diamonds.  Other moonstones were found in entries from Pave Fine Jewelers of Oakland, CA and a moonstone surrounded by tourmalines and diamonds from designer Philip Zahm.