The Story Behind the Stone: Another source, another phenomenon 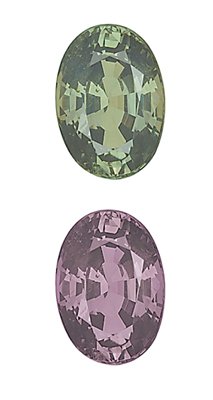 For bona fide gem connoisseurs, nothing compares to the hypnotic color change variety witnessed in the alexandrite stone. This rare and valuable jewel is actually a chrysoberyl that naturally changes color from daylight to candlelight. The striking and mysterious effect is infinitely repeatable. People routinely described this stone as an emerald by day and a ruby by night. The name Alexandrite (for Czar Alexander II) is a romantic nod to its original discovery in Russia’s Ural Mountains in 1830.

If that’s not enough of a light show for you, the stone occasionally produces a cat’s eye effect when cut en cabochon. Negative crystal inclusions and rutile silk account for its ability to create a cat’s eye phenomenon from a piece of alexandrite rough.

For dealers and miners working in the field, the rough crystal will show nice color change too, aiding in its immediate recognition. Unlike some gems which shift color due to pleochroism, alexandrite gains its color-changing properties from its unusual light absorption properties. Large carat sizes of the material have always been a rare occurrence. And until recently, its one source made it almost impossible to collect.

Recently however, this stone’s scarcity has been alleviated somewhat with the discovery of deposits in Sri Lanka, Brazil and East Africa.

Michael Couch, owner of Michael Couch & Associates has a deep history in colored gemstone acquisition. Almost 30 years in business, he’s an early adapter of going to the source of these stones for his inventory. One of his best sellers is alexandrite from the Tunduru (or Tundura) region of southern Tanzania near Mozambique. Known for its production of large quantities of chrysoberyl over the last two decades, its no wonder that alexandrite has also turned up in these deposits.

Consumers are dazzled by the different color possibilities on a single gemstone, considering it a ‘twofer’ with both colors being so very attractive. Couch says his retail and wholesale customers are consistently drawn to the jewel given its phenomenal effect.

Customer input from retailers has been very positive, reports Couch. “Especially when I take the time and expense to get certs on the stone,” he points out. That matters more with pricey goods, he knows. “When stones tend to be expensive, like alexandrite, the retailer appreciates having a cert to go with the stone. It is a nice plus when labs like GIA and AGL put both images on their certs of the blue/green phase and the red/purple phase.”

The hardness of this stone at 8.5 on the Mohs scale means that well-cut specimens should have very sharp facet junctions and be super sparkly; a selling point with jewelers who want to offer their customers something eye-catching. Couch sees the demand for this gemstone remaining strong. As contrasted to Russian alexandrite, the prices are certainly more attractive, allowing more customers to enjoy a genuine rare gemstone.

That detail could bode well for the Tanzanian variety which is sourced from three alluvial river bed areas. “It is likely that public demand will increase as Tanzanian stones are more available. I think that one reason there is not a larger demand for alexandrite is that everyone knows that it is hard to source,” Couch says. But the future appears bright for this two-color wonder. “If this material becomes more available,” and Couch predicts it will, “I think you will see more retailers trying to source alexandrite.”