The Story Behind the Stone: Beryl of Sunshine

Beryl, a celebrated and ancient gem species counts emerald, aquamarine and the delicate pinky-peach morganite in its lineup. There’s also the elusive red bixbite, the priciest one, and an extremely rare jewel to boot. But one captivating variety hasn’t been around for eons. Early in the 20th century, German miners in Namibia digging for aquamarine happened upon a rich beryl pocket that exposed stunning saturated golden crystals. Previously unknown, they’d discovered yellow beryl. After the initial unearthing, yellow beryl deposits found elsewhere produced crystals in warm orange-ish shades or with a slightly greenish back color that would expand the new gemstone cache. 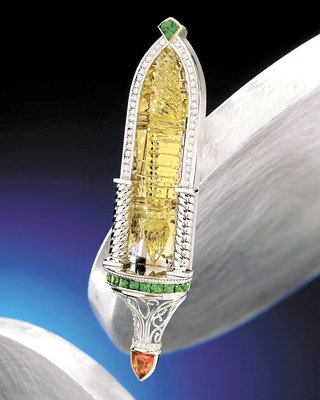 In its purest form, colorless beryl, an aluminum beryllium silicate is called goshenite. But minute traces of iron transforms colorless beryl into various shades of yellow. Geological conditions play a key role in the range of color within the same species. Yellow beryl likewise exhibits different shades depending on its region of discovery. Dealers however, favor the intensely deep yellow beryl that hails from Southeast Africa or Madagascar.

Every Shade A New Name

In marketing, all yellow beryl is often mistakenly called golden beryl. But slight color variations warrant a change in its name. Those with a slightly greenish cast are called heliodor, while pure yellow to yellow-orange crystals are properly referred to as golden beryl. The color strength depends on the relative concentration of the iron in each rough.

Heliodor has a loyal following among mineral collectors, but not so much for jewelry fans. Award winning gemstone cutter Dalan Hargrave finds consumer preference leans toward straight yellow shades. “In general, my customers prefer golden beryl over heliodor, which is very similar, but usually has a light green or even a brownish tint making it less attractive.” Golden beryl on the other hand is gaining devotees, with both creative designers and with the public.

Yellow beryl occurs in large crystals, which broadens its utility for both jewelry and gem encrusted adornment. The largest faceted heliodor known to exist, at 2,054 carats is displayed at the Smithsonian Institute in Washington, DC.

Hargrave has developed a short list of favorite gems. He says, “Beryl is one of my favorite gemstones to work with and particularly golden beryl since it can have such a rich golden yellow color.”  Not all yellow beryl attracts his attention. When a cutter of his caliber selects a stone to work with, it must be worthy of all the time and creativity he will pour into it. “The challenge is to find internally clean material with good color saturation,” Hargrave points out. “Lighter colored material with inclusions,” he says, “just doesn’t produce very brilliant gemstones; even though the paler variety is more readily available.”

Fancy yellow sapphire collectors or canary diamond aficionados already adore sunny yellow stones. They may be the ideal collector of golden beryl since it can mimic a fine yellow sapphire or colored diamond. Lively and dispersive, it radiates the look of a high-end stone. For instance, yellow beryl will never be mistaken for citrine, which is a much less expensive stone. Quartz is also softer, so citrine, which is quartz, cannot take as high a polish as beryl. It lacks the sparkle potential that occurs in well-cut yellow beryl. That makes yellow beryl a luxurious looking stone, even though its price points are nowhere near that of yellow diamonds or fancy yellow sapphire.

Celebrity stylists make their stars shine by pairing glamorous gowns with the perfect jewels on their clients. A popular jewelry brand often seen on the red carpet belongs to designer Erica Courtney whose clients rank as Hollywood’s A-listers. Courtney, a golden beryl lover herself, is known for creating tantalizing gemstone combos in opulent designs that suit her customers’ lavish lifestyles. Asked about her use of yellow beryl in her line, Courtney says, “I love working with yellow beryl because it gives the rich look of a canary diamond and has such a warm golden glow.”

As yellow beryl’s popularity soars, acquiring premium goods in sought-after colors is becoming challenging. Hargrave sees the stone’s high demand creating consequences. “Gem quality, as seen in the Pass the Torch piece,” he notes, “is harder to find among rough dealers.” Those are some heady accolades for a stone that’s just about a hundred years young.