The Story Behind the Stone: Bewitching Sapphires

Black is back, in gemstones that is. One could argue that it never faded from public demand. But there are few pricey black stones that can truly be fit for couture jewelry. Black diamonds are one such gem. Many of these ebony beauties rely on irradiation to even out the distribution of inky black tone across the entire stone. Large black diamonds often suffer from surface reaching fractures which could compromise the stone’s integrity. 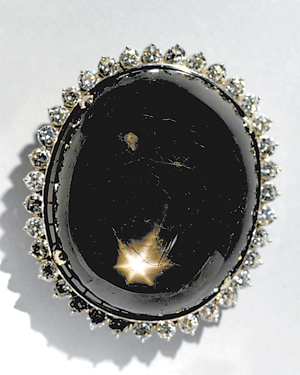 The largest black star sapphire ever discovered is called the Star of Queensland, found in 1932.

Lesser valued black stones abound like jet and onyx. There are black looking tourmalines too. But none of these are snatched up by haute jewelers.

So, how about black sapphire? Corundum is sapphires’ species, and this mineral boasts a boatload of naturally occurring colors – like pink, green, purple, orange, yellow, brown – besides blue and red, making that variety a ruby. To sweeten the deal, some black sapphire contains rutile needles, becoming a star sapphire when cut en cabochon.

Black sapphires are a lustrous alternative to black diamonds. All corundum is a hard mineral, ranking 9 on the Mohs scale. This is second only to diamond, the hardest substance on earth, so sapphire is guaranteed to be gorgeous and new looking years after one first acquired it.

Sapphires are found in Madagascar, Kenya, Thailand, Nigeria and other destinations, including the United States.

12th century Von Bingen chronicled many gemstone traits in her book “Physica.” She wrote this about sapphire – “Who is dull and would like to be clever, should, in a sober state, frequently lick with the tongue on a sapphire, because the gemstone’s warmth and power, combined with the saliva’s moisture, will expel the harmful juices that affect the intellect. Thus, the man will attain a good intellect.”

I’m thinking you would be smart enough just to buy the stone. But that’s me.