The Story Behind the Stone: Big Orange

Within that group of elite diamonds, some colored diamonds are even more elusive than others if you can imagine. Straight orange diamonds are such a rarity, that their price is anyone’s guess. Lab-created or enhanced orange diamonds may be the closest some consumers ever get to spy these juicy looking gems. 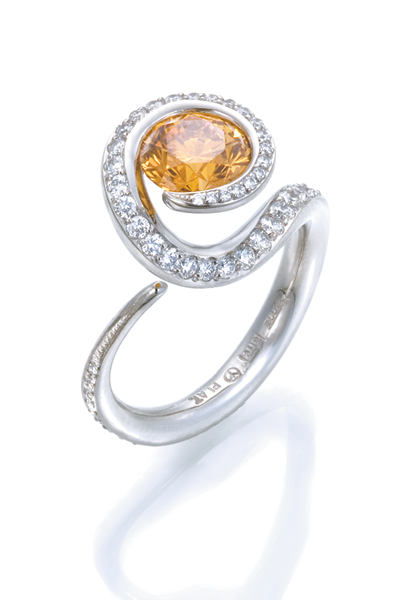 When orange diamonds are available, they usually are accompanied by strong modifiers to their color that prevent them from being graded straight orange. Nitrogen atoms, for example, in sufficient concentration, create brown, yellow or even orange diamonds. Orange fancies are often darker-toned, weak to moderately saturated, which may also result in low thermal conductivity of that stone.

Fancy color diamonds often have distinct traits peculiar to their subset. For example, pinks likely have very dark-colored inclusions, often visible without magnification in sizes larger than 1 carat. Blues often exhibit strong color zoning or centers, and fancy color greens can have much of their color localized on the crystal exterior. Orange diamonds are known to fluoresce and exhibit several kinds of crystal inclusions within the stone.

The Pumpkin diamond, the world’s largest Fancy Vivid orange diamond, is the Grand Poobah of orange diamonds. Discovered in in the mid-1990s, the stone first looked to be mostly brown. Purchased at auction the day before Halloween in 1997 by Harry Winston, Inc., the rare stone was shaped into a magnificent 5.54-carat cushion shaped modified brilliant cut jewel and worn by to the Oscars once before it went on display at a colored diamond exhibit.

Suppliers are understandably reluctant to share prices about their fancy orange diamonds. The rarer the fancy color, the wider the chasm in pricing structures for the most subtle tone or clarity differentials. A ‘clean’ Fancy Vivid orange stone can vary from $250,000 up to $300,000.  A similar orange stone with SI clarity might go for $150,000 to $250,000. A Fancy yellow-orange VS-plus could go for around $10,000, while a Fancy Vivid yellow-orange VS-plus will be around $30,000.”

Even with such guidelines, the prices can veer drastically, depending on the number of inclusions in the stone, whether they are light or dark and their location within the stone. The make and the shape of the orange stone also impact pricing.

Rare fancy color diamond expert Stephen H. Silver, chairman and chief executive officer (CEO) of S.H. Silver Co., owns an exquisite 1.50-carat pear shaped Fancy Vivid orange diamond that he is in no hurry to sell. Silver understands the importance of public exposure with these rare goods. When it comes to his orange stone, he’s happy to hold tight because he recalls the regret he still feels over selling a special fancy colored diamond some time back. 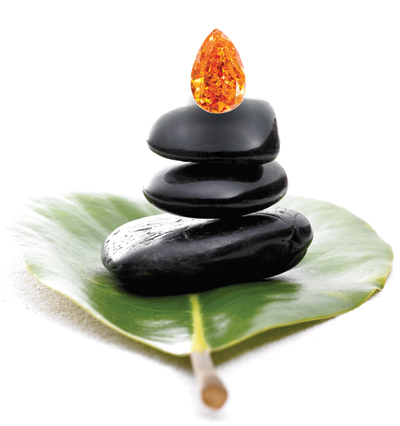 Some colors, like pink or blue diamonds are very appealing to jewelry lovers who will wear these beauties. But orange diamonds, experts say, are sold to the connoisseur. “These are fantastic stones for the collector. There is nothing else like them in the gemstone world, not even padparadscha sapphires.”