The Story Behind the Stone: Chalcedony’s Time

It’s day has come. Chalcedony, a general name for a group of quartz minerals is finding its place amongst some stellar stones these days. It has always been a beautiful gem, but is now coming into its own as an intriguing semi-opaque gemstone material. When it’s blue, the attention ratchets up further. 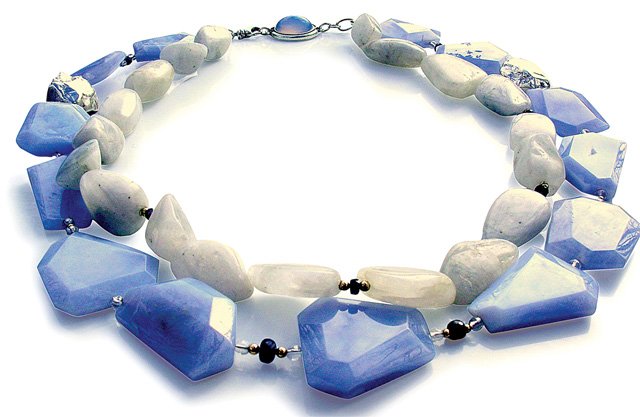 The material occurs naturally in a wide range of colors and is often found in large size rough. But the scene stealer in this stone lay in the natural patterns each specimen displays. That detail makes the stone itself part of the design process. The material is a variety of cryptocrystalline quartz. So many of these varieties exist that to eliminate confusion, the one called chalcedony refers only to the translucent to solid, lighter color variety, which typically exhibits colors from blue to white or gray. Whether they are transparent or opaque, collectors adore blue gemstones; so blue chalcedony is a star in the making.

For the record, other cryptocrystalline quartz stones are identified by their own individual trade names, like banded agate, jasper and carnelian. 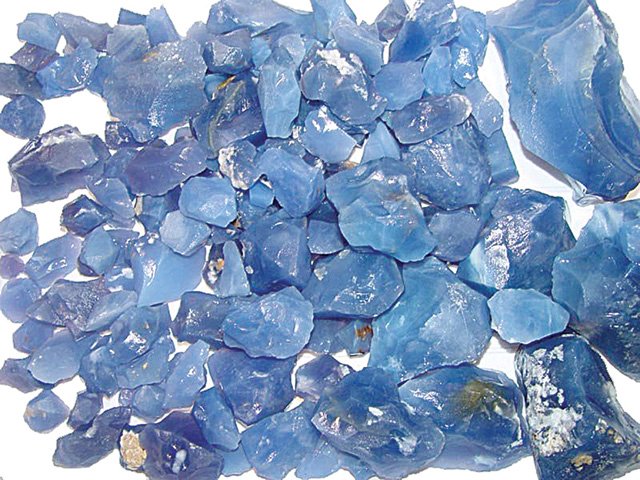 Chalcedony’s foundation name stems from the Latin word Chalcedonius, and was probably derived from Chalcedon, the ancient seaport of Asia Minor; today in Turkey. Jewelers like the material because it ranks 7 on the Mohs scale, and it will take an excellent polish. Some say after a prolonged polish; certain chalcedony varieties display a glow that appears to emanate from within.

Even Blue Chalcedony is called by sub-category names to distinguish it even further. Mohave and Mt. Airy Blues, from deposits in California and Nevada, display a slightly grayish blue tone. The blue material from Namibia, is African Blue, and ranges from grayish-blue to a straight pure blue hue; in light to medium dark tone. Some experts claim that the most desirable blue chalcedony hails from Oregon, however. Its blue tint may include traces of pink, resulting in an attractive lavender stone, and identified as Holly Blue.

Through the Designer’s Eyes

Designer Mia Katrin of Jewel Couture LLC specializes in distinctive stones for her collections. She sources what women would like to wear – because she’s a woman who loves distinctive jewelry herself. Katrin confesses: “I’ve always loved chalcedony, especially the blue color. It’s kind of soft and dreamy, but also very intense and vibrant.” The stunning blue chalcedony neckpiece from her Statement Collection is bold yet feminine, and that’s how Katrin sees today’s woman. 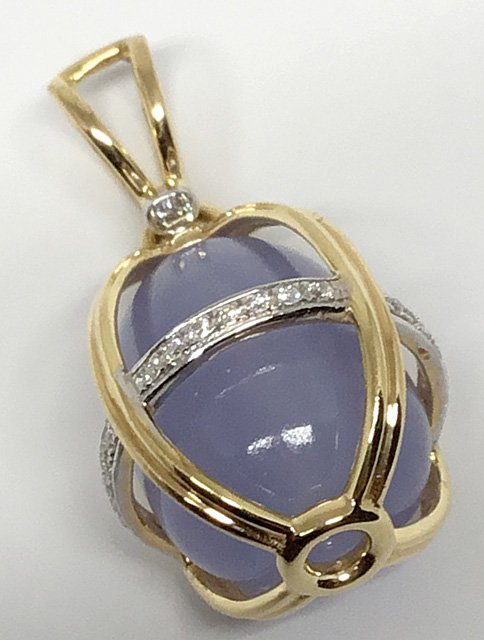 In her Statement Collection blue chalcedony neckpiece, the clever pairing of vibrant blue chalcedony with complementary gems like moonstone establishes its effortless chic. “I like the juxtaposition of the raw natural nuggets of my blue chalcedony in harmony with moonstone, sterling nuggets and sapphires in the same piece,” she points out.

As collectors become more savvy about gemstones in general, and acquire jewelry that makes a personal statement about their style, we’ll find blue chalcedony making a bigger splash in jewelry stores. Your customers may not know what they like until you show them something out of the blue – like the easy elegance of blue chalcedony.

Award winning trade journalist and gemologist Diana Jarrett is a Registered Master Valuer Appraiser and a member of the Association of Independent Jewellery Valuers (AIJV). She’s a popular speaker at conferences and trade shows. Jarrett writes for trade and consumer publications, online outlets, her blog: Color-n-Ice, and www.jewelrywebsitedesigners.com. Contact her at , visit her website at www.dianajarrett.com, and follow her on Facebook and Twitter (Loupey).