The Story Behind the Stone: Digging deep into aquamarine

Limpid aquamarine bedazzles legions of devotees. Its cool sea foam refreshes the eye and inspires a sense of wonder in designers. Aqua’s ethereal greenish blue is a modern choice for artisans who believe “the stone’s the thing” over their prowess at the jewelers’ bench. 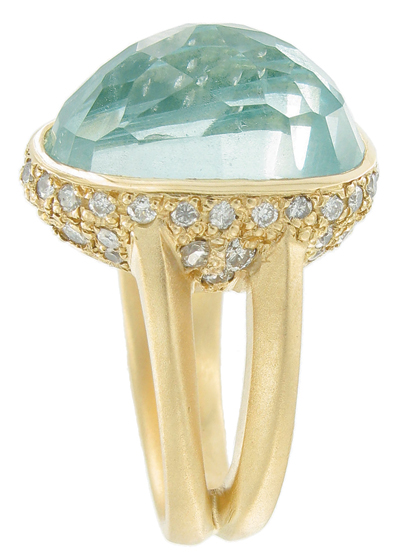 But this precious beryl variety has been harvested for centuries where vividly hued stones are found – places like Brazil, Kenya, Madagascar, even Russia before their deposits were mined out. Early in the 20th century a 243 pound gemmy crystal was found in Minas Gerais, . That worked out to be an 18 inch long by 15 1/2 inch aqua rough in 100,000 carats give or take.

Unlike its much included sister emerald, aquamarine is often found in exceptionally clean crystals, which accounts for so many fine aquamarines being polished into emerald or step cut shapes. All the better to see you my dear.

Aquamarine has also been found in humongous crystals weighing tons. Tons, like the couple thousand pound size. But don’t start planning that life sized self portrait to be carved in aqua just yet. Super sized aquamarine in that magnitude is usually opaque and grayish.

Visionary designer Vicente Agor finesses the delicate task of creating an artful frame for a superb aquamarine; doing justice to this choice stone without upstaging it. Standing Os for Agor’s oeuvre.