The Story Behind the Stone: Dream a little dream

For consumers, the idea of naturally colored diamonds is still not universally understood. Even the trade’s nomenclature, referring to diamonds as being ‘produced’ in such and such colors or carats unintentionally makes it seem like someone is manufacturing the stuff in a covert lab somewhere.

By now, however, thanks in great part to celebs donning glitzy jewels on the red carpet in Hollywood, many consumers have caught on to the fact that diamonds do come in colors and are very pricey. Pinks have shot up through the stratosphere, baby blues have toppled previously held prices, and reds, well there are so few that they remain an enigma, don’t they?

Some colors are so hypnotic that they can startle even jaded industry insiders. Consider the alluring teal blue-green diamond that fascinated tradespeople ever since its debut. Even on those rare incidences when a blue diamond turns up – it’s nothing like the teal triangular shaped wonder that diamantaires dream about. The sumptuously rich blue green Ocean Dream diamond weighing 5.51-ct which was color graded as Fancy Vivid Blue-Green (SI1) by GIA. It sold at Christie’s Geneva Magnificent Jewels auction in 2014 for $7,764,694.14-US. 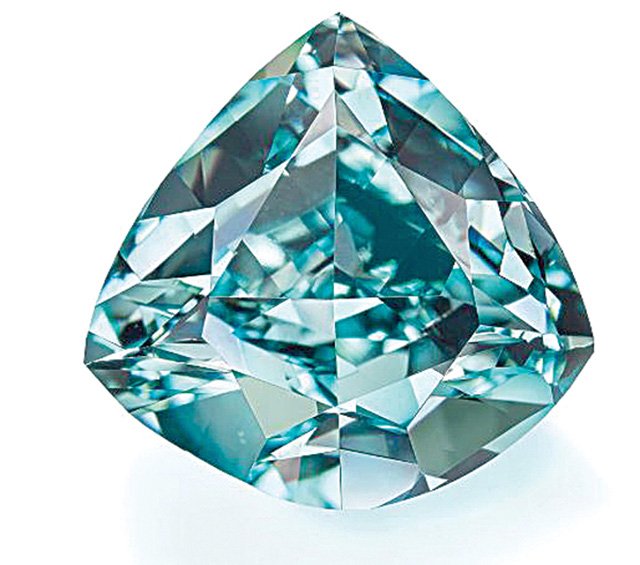 Its crowd-stirring charisma is the result of its rarity. The Ocean Dream, from Central Africa is the first and one of the only natural diamonds known to GIA with that exact blue-green combination. Besides Brazil’s smaller oval shape 1.6 cts Ocean Paradise Diamond owned by the Nahshonov Group, it remains one of the rarest diamonds in the world. Gorgeous as it is, the Ocean Paradise diamond has a distinctly lighter tone and a different tint than the richly hued Ocean Dream; it is classified as Fancy Green-Blue.

Up Close and Personal

Los Angeles based Guild Labs president Charles Carmona, is a highly respected gemologist-appraiser with four decades of experience. He’s examined some extraordinarily rare jewels during his career, many of which have gone on to sell for record-breaking prices. Of the Ocean Dream which he had the opportunity to examine, Carmona said, “It’s not only exceptional for its size but also for its nearly equal mix of green and blue.” For all his background, handling a diamond like the Ocean Dream has never become commonplace for this industry pro. “The chances of examining such a diamond are rare” he reflects. “It is truly a pleasure to see such a stone.”

Imaginative Tastes – on a Budget

By the way, the ubiquitous affordable blue-green diamonds sold on jewelry shopping channels, and across the Caribbean are enhanced diamonds, whose color is derived by irradiation treatment. Plenty of people can have the feeling of owning a blue-color diamond for a few thousand dollars, in some cases just hundreds. It’s a way for jewelry fans with modest discretionary funds to enjoy an unusual variety of diamond.

Serious collectors consider the search for a rare fancy colored diamond to be a wonderful vocation. If you think that something as winsome as the blue-green Ocean Dream diamond is a thing of the past, you might be in for a pleasant surprise. Genuine fancy color diamonds are naturally occurring, so we actually don’t know when and where the earth will yield its next wonder.

Expert fancy color diamond merchant, Leibish Polnaur, president of Leibish & Co. acquires exceptional stones for a knowledgeable diamond collector. They understand that certain things in life are worth the wait, and when you find it – you’ve found your dream. After acquiring a one-of-a-kind .55-ct pear-shaped blue-green fancy color diamond, they gave it a beautiful name, Ocean d’Amour. 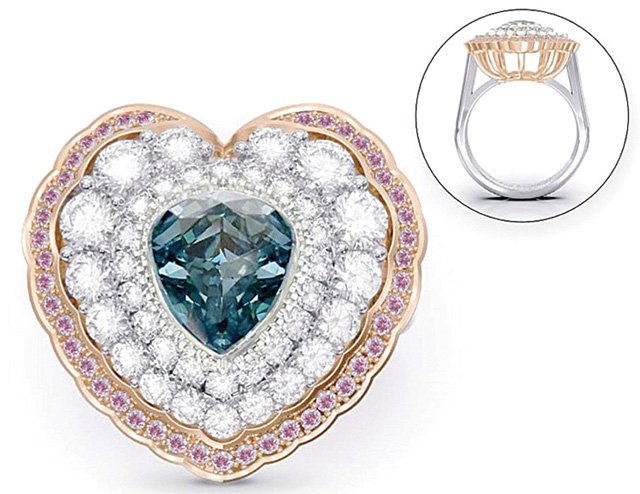 Drawing inspiration from the larger Ocean Dream, Leibish’s blue-green pear looks like a color-match for that famous larger diamond. “The color resembles the deep aquamarine shades of the ocean,” Leibish reports. GIA classified the Ocean d’Amour as ‘fancy deep blue green’, giving it the distinction of “being among the rarest diamonds in the world.”

The very rich depth of color, also resembling the deep aquamarine shades of the ocean, combined with the unique ‘pear modified brilliant’ shape of the stone, Leibish says, “makes it hard to ignore the resemblance between this diamond and the Ocean Dream.”

Not only are these unique diamonds extraordinary to behold, but they spur the imagination in all of us. You may have dreamt about a certain rare color diamond. What is it?  Let your dreams embolden you to search for the diamond of your lifetime.