The Story Behind the Stone: Jewels Under Foot 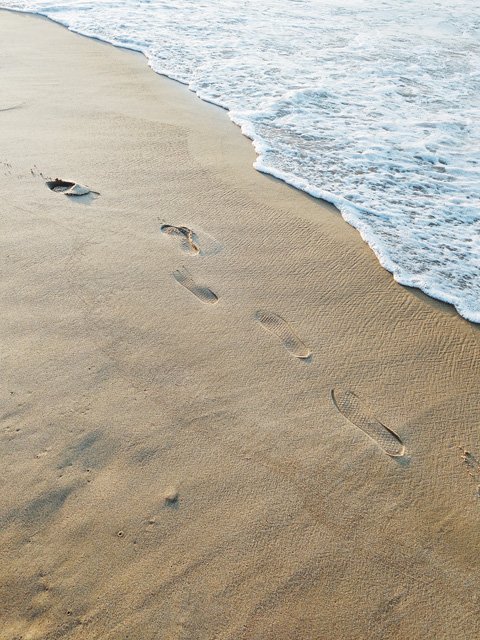 The riches of the universe lie beneath our feet. Photo, Pexels.Contributor Diana Jarrett lends one of her articles that previously appeared in Delmarva Quarterly. In it, she examines the contents of the miles of sandy shoreline that stretches along the Chesapeake Bay. Not exactly a gemstone article – but also, not unlike one either. It is presented here in the hopes that you too will take a closer look at the common everyday things around you and discover jewels in your own life.

Driving along Highway 13 to my home in Onancock, VA, I gaze at the flat farmlands infrequently dotted with old clapboard, once-white Federal style houses. Many of them lie abandoned now in various stages of decay. I wonder who lived there in the first place. What was life like for those early inhabitants, so isolated on this still remote peninsula?

To this day, no one will ever be accused of dropping by my place because they were already in the neighborhood. One has to intend to come to my house, which is the way I like it.

For years now, I’ve spent part of each year on the Eastern Shore of Virginia. I’ve watched the Shore change with every season. In the dead of winter, the landscape is transformed into an austere scene of Andrew Wyeth-like minimalism.

But, oh! Summers on the Shore. It’s then that my friend, a sixth generation Shore native, will remind me – a “Come Here” as I’m known locally – that blueberries are ready to be picked. If I don’t remind her that I can only eat so much, I’ll find a bounty of local vegetables at my side door every other day. It’s her vocation; gleaning. And she knows all the farmland owners. That means she will faithfully pick through the harvested crop fields once more, collecting enough fruits and vegetables to bless all her friends.

Summer on the Shore is my time to slow down to the pace of a bygone era. For the rest of the year, I’m looking down my microscope – researching obscure gemstones for individuals or companies who need the service of a gemologist. When I’m not doing that, I write for trade journals and lecture.

In summer, I break from my work and head to the Shore, but I never break from wondering what is all around me. Gemology is a personal passion for which I also get paid. Lucky me.

When it gets steamy, locals head for the water. Fortunately, I live on a deep draft harbor town, and I can take my pick. Do I jog down by the boats today and see who has anchored for refueling and to have a walk-about? Or will I go seaside, and lose a morning wandering along the sandy stretches of the Atlantic shoreline in Assateague?

Whichever one I choose, it occurred to me that the sands beneath my feet may have a story of their own to tell. I decided to investigate.

In researching our sandy composition, I was surprised to learn that almost nothing has been written on this subject. 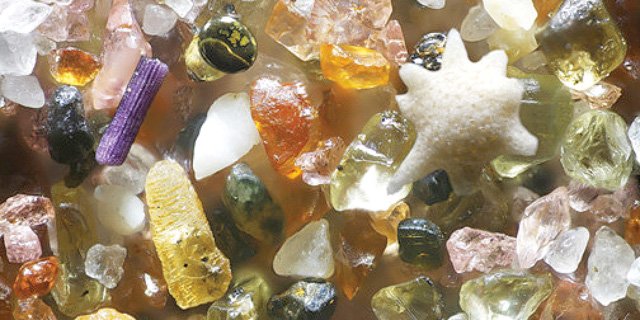 First, I sniffed out some rock hounds; those gem nerds who poke around rocks for a hobby. Several rock-hounding groups are found on the eastern seaboard. An area rich in minerals, some of them are gemstone quality. They can be faceted for jewelry when the rough crystal found in the ground is big enough.

Believe it or not, gold has also been found in Virginia. Before you stake a claim, you will want to know that it’s infrequently found in any size at all. Nevertheless, Thomas Jefferson once discovered a four and a half pound solid gold nugget whilst strolling in the Virginia woods one day.

I also enlisted the help of government geologists who focus on our regions’ land and minerals. Here’s what I discovered. It may surprise you.

These shorelines are truly jewels beneath our feet. Sand has to be made of something, doesn’t it? Larger minerals broken down into tiny sizes become the object of delight when we squish our bare feet through it, releasing our inner-kiddy on the beach.

Some of the mineral names comprising the Chesapeake Bay Shoreline sands sound foreign to all but the scientists who study them. You’ll recognize other names as gemstones found in your jewelry box, or that you wish you had.

An abundant number of minerals make up the coastal plains of our Bay. Things like Fayalite, an olivine mineral is found in the sands. This may not sound familiar, but Peridot might. The beautiful yellowish-green transparent gemstone is another stone from the olivine group.

When an official study of Chesapeake Bay sands was conducted some years ago in Richmond, a treasure trove of minerals was identified. Over twenty different minerals were listed in their findings, including some which are valuable when found in larger crystals. Zircon, garnet, tourmaline, topaz, and diopside; all familiar names to gemstone lovers, are mixed in our sands.

According to one regional geologist, “Another potential source of small quantities of minerals is [found at] the Bolide/Chesapeake Bay impact crater west of Cape Charles near the mouth of the Bay. Some rare minerals associated with the crater may be turned up in the sands off that region.”

An occasional fossil, he added, and shark tooth can be found as well.

Local rock hounds proved to be most helpful in my search. With little prompting, they freely offered a wealth of knowledge on their favorite subject. For them, rocks run the gamut from rare and curious minerals, to “look at that rock (diamond) on her finger.”

A Richmond rock hound offered this interesting observation. He recalled seeing clear quartz in the sandy shoreline mix and blue quartz too. Keep in mind, these are granular in size. Nevertheless, blue quartz is quite rare, while clear quartz is one of the most plentiful substances on earth. Do you know someone with a citrine ring, or maybe an amethyst necklace? Those are colored varieties of quartz. On further reflection, he remembered seeing minuscule crystals of ruby, sapphire, and garnet too. Oh yes, a bit of diamond turned up.

The next time you treat yourself to a day at any shoreline, lakeside, bayside or seaside, take off your shoes and indulge in the luxury of a barefoot stroll along our beautiful sandy shores. Not only will it feel rich to do so, it is rich; loaded with tiny gemstones for your pleasure.