The Story Behind the Stone: More than just a pretty facet

The trait that makes colored gemstones so appealing is their storytelling opportunity. Most of them are sourced in remote parts of the world, often at great peril to the gem hunter. Political hot-spots and treacherous accessibility near mining regions contribute to the overall risky climate involved with their harvest. 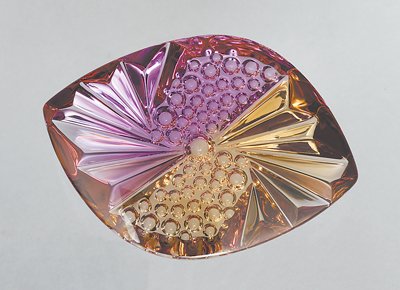 Such is the situation with the glamorous bicolor ametrine quartz. Gem fans love yellow, but they like purple too. Having both colors on the same stone doubles its appeal. Yellow quartz is citrine, while purple quartz is called amethyst. Each of these crystal varieties individually are often found in the same location. The secret to the bicolor miracle formation lays in differing oxidation states within the crystal. While the crystal is being formed, temperature variations across the crystal will produce this two toned wonder.

Distinct geology plays a big role in mineral formation. Bolivia produces the world’s entire supply of ametrine, (also called bolivianite) from a southeastern locale – the Anahi mine. The precise terrain with its dolomitic limestone creates the perfect storm for multi-color occurrences in the same crystal.

That’s all well and good for rock hounds and mineralogists, but collectors crave more romantic folk-lore from gemstones found eons before modern jewelry lovers laid hold of them. Ametrine delivers on that count.

Local legends claim the Anahi mine had been known since the 17th century when a lucky Spanish conquistador snagged the mine as a dowry by marrying a tribal princess. The conquistador – groom later introduced the bicolor treat to the Spanish Queen upon his return to Europe.

Commercially, this mine has only been in operation since the late 20th century however. And that’s just fine with modern day fans and imaginative gem artists.

Celebrated gemstone cutter John Dyer’s exciting Nebula™ cut Bolivian ametrine took 2nd Place in Innovative Faceting at AGTA’s 2015 Cutting Edge Awards. Sharing his viewpoint Dyer remarked, “It is probably the coolest of the gems of mine that won . . . this one has a very unusual look.”

Ametrine’s unique bicolor appearance already makes for a showy piece. But Dyer thought outside the box, actually way outside the universe, when he made his ametrine design. “It is my “Nebula™ cut,” Dyer explains, “named for the clouds in space which often appear in spiral form. They are exceptionally beautiful in photographs coming from the Hubble telescope.”

Dyer drew his initial inspiration for the particular cut from the shape of the rough, he says, exploiting “the natural bicolor in the rough that divides it nicely down the middle.”

Working with the stone’s distinct color separations, explained Dyer, allowed him “to locate the center and the division of the double swirl pattern right at the junction of the two colors. The effect was achieved using carefully placed carved bubbles and micro grooves combined with smooth polished surfaces that could be termed as a ‘convex facet’ along with a buff top style crown.”

Your customers want a great story so they can become devoted to their gemstone of choice. Bolivian ametrine provides that element of intrigue and dazzling visual appeal. Add an extra layer of attraction from creative cuts from artists like Dyer and the stone becomes a magnet for collectors.

Award winning trade journalist and gemologist Diana Jarrett is a Registered Master Valuer Appraiser and a member of the Association of Independent Jewellery Valuers (AIJV). She’s a popular speaker at conferences and trade shows. Jarrett writes for trade and consumer publications, online outlets, her blog: Color-n-Ice, and http://www.jewelrywebsitedesigners.com. Contact her at info@dianajarrett.com, visit her website at http://www.dianajarrett.com, and follow her on Facebook and Twitter (Loupey).