The Story Behind the Stone: Provenance and Story

There are, of course, certain gemstones that leave us speechless. Their beauty, and sometimes, their unexpected variety leave bona fide collectors in awe. We know rarity when we see it. But jewelry is a bit of a different deal, even when it contains extraordinary stones.

Jewelry can take on a life of its own and develop a distinct personality. It all has to do with its provenance. The dictionary suitably describes provenance for us: “A record of ownership of a work of art, other valuable, or an antique, used as a guide to authenticity or quality.”

Provenance is best exhibited when jewelry goes to auction. An auction house would say “From the estate of…” to let us know about the item’s provenance – and added value. One should be expected to dole out some serious cash for its history. When Jacqueline Kennedy Onassis’ property went to Sotheby’s auction house in 1997, we found out just how much collectors valued owning a bit of Camelot. 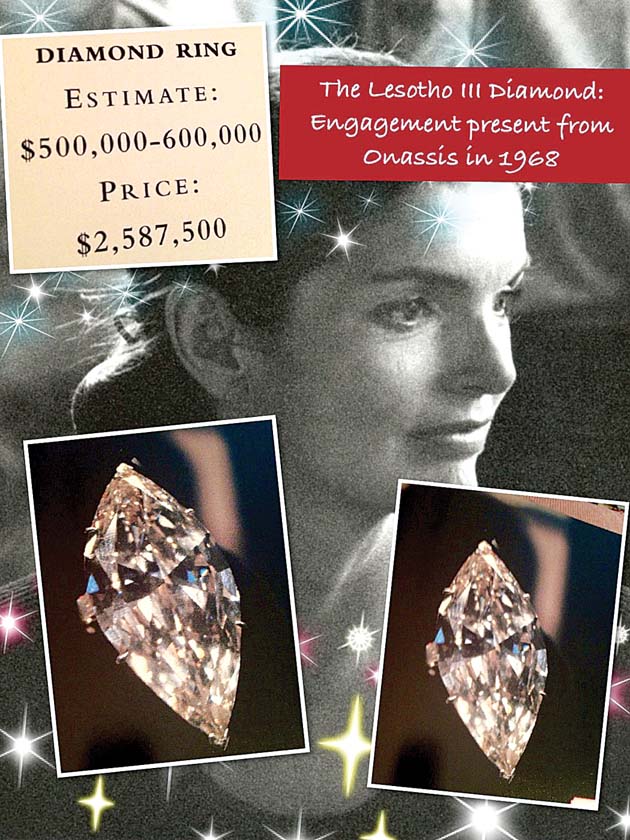 The Los Angeles Times seemed just as surprised as anyone when they reported the startling prices earned at Sotheby’s auction of her personal effects. True, some items, especially the sumptuous jewelry gifted her by Aristotle Onassis, were extraordinarily valuable. Other items, though interesting, got scooped up because of provenance. Turns out, even Jackie’s costume jewelry got snapped up like it was going out of style – because it actually was. These pieces were often a collaborative effort between her and designer Kenneth Jay Lane, never to be replicated. These pieces took on a life of their own at the sale.

“The auction fever of the Jacqueline Kennedy Onassis estate sale ended Friday with frenzied Camelot souvenir hunters ringing up $34,457,470 during four days on Sotheby’s cash registers, over seven times the original estimate of $4.6 million,” boasted the LA Times review of that sale.

So, let’s watch provenance do its thing. The Lesotho III marquise diamond engagement ring was Onassis’ engagement gift to Jackie. It has a real value no matter who owned it. Sotheby’s estimated its pre-auction value to be between $500,000 and $600,000 at the time. Placing that in context to today’s valuation, $500,000 dollars is over $811,000. When the gavel came down for the last time, the knuckle-sized sparkler came in at $2,587,500. That’s a lot of history.

The “Story” is similar to provenance. But it can be a seminal component to creating desirability of an item irrespective of what it ‘should be worth’. For some reason, one of the most iconic personal items of Jackie O did not make the original Sotheby’s sale in the late ‘90s. It did pop up at a Christies watch sale just a couple years back, however.

Jackie O’s simple black strap Cartier tank watch should have garnered a bit of cash, owing to its provenance, and the fact that vintage Cartier tank watches are collectible in general. Jackie wore this understated watch for decades, and it was one of her favorite every-day accessories.

Timepiece historians speculate that Cartier sold over a billion dollars’ worth of these simple Jackie having sported it on her wrist for years. That’s the power of Story.

Vintage Cartier tank watches can sell between $5,000 and under $10,000 today. Christie’s put a pre-auction estimate on the Onassis watch of between $60,000 and $120,000 owing to its celebrated previous owner. It had a touching story behind it, and one can’t help but wonder if its personal history for Jackie endeared the simple timepiece to her even more.

It was given to her by her brother-in-law in 1963 – right before her husband was assassinated. An inscription on the case back referenced the start and finish time of a celebrated walk-event her brother-in-law participated in to promote healthy lifestyles – a plan President Kennedy encouraged.

This storied watch earned $379,500 at the 2017 sale. That’s a lot of story. But as legendary jewelry pieces go, the story is not always over – sometimes it’s just begun with the next owner. In the case of this historic watch, Kim Kardashian became its next guardian.