The Story Behind the Stone: Radiating Sunstone

Sunstone, the plagioclase feldspar mineral has attractive inclusions like hematite that lend a sparkly effect to the cut gemstones. These attractive hematite or even goethite crystals make each sunstone gem distinct from every other stone, and create reflections that appear to make the stone shimmer. Most gemstone lovers are familiar with the red orange variety, but the stone also comes in shades of green. 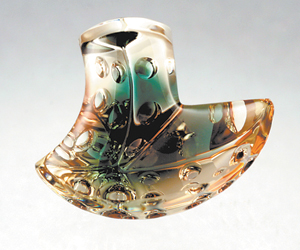 Deposits of the mineral variety called Oregon Sunstone found in Oregon resulted in this pretty stone being designated as the state gem. Oregon sunstone has copper crystals in it which result in the attractive colors in the stone including yellow as well as a wide range of greens, red and pink.

The stones were originally formed in molten lava that eventually traveled to the earth’s surface with the help of volcanic activity. When the kimberlite, or weathered lava earth eventually breaks down, the sunstone crystals are released.

Plentiful deposits in Scandinavia made this ancient stone a favorite with early explorers there. Records suggest that this stone was used by natives as barter in ancient times. The Vikings are believed to have valued sunstone as a navigational talisman.

Today, it is widely collected for its individual looks and glamorous scintillation, making it a favorite with artisan designers. With a Mohs scale hardness of 6.5 to 7.2, it’s a jewelers muse, especially in the design of pendants and dangle earrings where movement of the wearer heightens the effect of its charming sunny glints.

This stone has been the subject of erroneous representation over the years, on jewelry home shopping channels and via other methods of gemstone marketing. It’s not rare nor at risk of becoming finite. There are plentiful sources for this material. Now we know that this stone may be natural or heat treated to affect its color. Hopefully, it is now being marketed with full disclosure. So consumers and jewelry designers should continue to enjoy this pretty stone for what it is – a jewel with a sunny disposition.