The Story Behind the Stone: Real cut ups!

Artists have been cutting into gemstones of all kinds for eons. And they’ve used the widest array of gemstones imaginable for displaying their artistic prowess. When the gemstone is composed of several colored layers, its all the better. A multi-layered stone allows the skillful artisan to portray a sense of depth into the carving. For this type of dimensional work, natural conch shells and agate work best. But daring designers have also used onyx, malachite and black opal for years. Cameos in these stones pop up regularly for sale with top auctioneers. 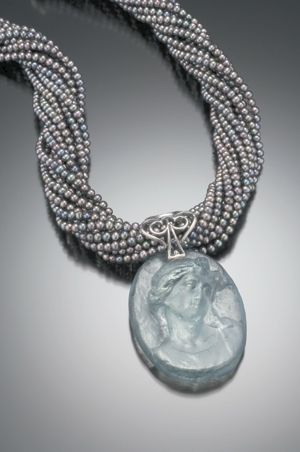 Shells offer artisans a variety of color combinations, but their size often restricts the final proportions of the carving. Agate however is often a large stone, so the final artwork is limited only by the size of the rough stone that a carver finds. The bigger pieces of agate provide a large surface upon which the artist carves their story.

This art form goes way back. The Grand Camée de France is a first century work of art carved from a 5 layer sardonyx stone in 23 AD. It’s considered the Grand Poobah of historical gem carvings owing to its age, quality of craftsmanship and size.

These extravagant artistic expressions are still undertaken by talented craftsmen today. Father and son carving team, Dieter and Andreas Roth exhibited their whale of a carved agate at the InterGem Fair held on October 2 – 5th 2009 in Idar-Oberstein, Germany.  Idar-Oberstein is the world center for classic gemstone carvings. The Roth’s carving is said to be the largest carved agate plate known to exist measuring 49 x 36 cm or 19.29 x 14.17 inches.  This plate depicts the Birth of Venus, and is modeled after the 19th century painting of Venus by William-Adolphe Bouguereau.

Did you know that transparent colored gemstones adored by modern collectors (including you) are also being carved up in style? Some colored gems are styled into classic cameos of the traditional female profile, while others depict a mythological or historical scene.

Aquamarine, green tourmaline, citrine, and a host of bijoux are turning into real cut ups today. Your customers who are on the lookout for original jewelry, or a signature piece, will find a unique item with modern carved gemstones. When they learn that this art form has an ancient pedigree, they’ll be all the more enthralled. 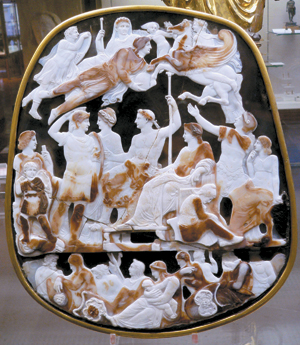 The Grand Camée de France was carved from a 5 layer sardonyx stone in 23 AD.