The Story Behind the Stone: Some quartz offers more than surface attraction

Quartz is the most plentiful substance on earth. You may have a microscopic speck of it in your eye right now! That’s what that itch is. But it also grows in massive crystals weighing tons.

The varieties of quartz produced have given jewelers beautiful gems to design around for centuries. Ancient Greeks believed the purple tinted amethyst, a quartz variety, prevented drunkenness so they carved tiny goblets from it and drank to their hearts’ content. 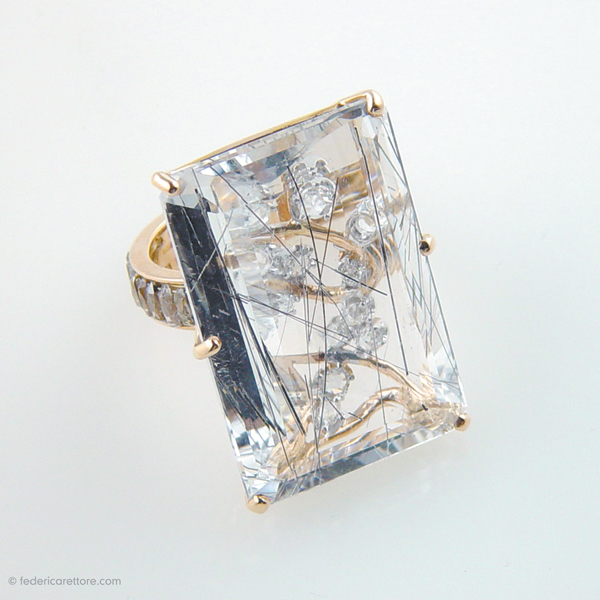 Fine timepieces, especially earlier ones had crystals made of – you guessed it – rock crystal quartz. In the late 19th century, French scientists discovered piezoelectricity in quartz which later led to the development of the quartz oscillator.

Sometimes the interest lies within quartz itself. Rutilated quartz developed acicular (long needles) rutile inside during its formation. The slender needles appear coppery colored in random patterns within the quartz crystal.

Lesser known tourmalated quartz is gaining in popularity with couture designers who value its exotic appeal. Tourmalated quartz is distinguished by black needles forming unique patterns inside clear quartz. Both of these captivating quartz varieties provide another layer of interest to artistic jewelry made for discriminating collectors.

The quartz crystal shown here has a massive shaft of rutile needles growing out of the specimen. Luxury designer Federica Retorre creates a mesmerizing ring using a superb piece of tourmalated quartz.