The Story Behind the Stone: Tales from the dop 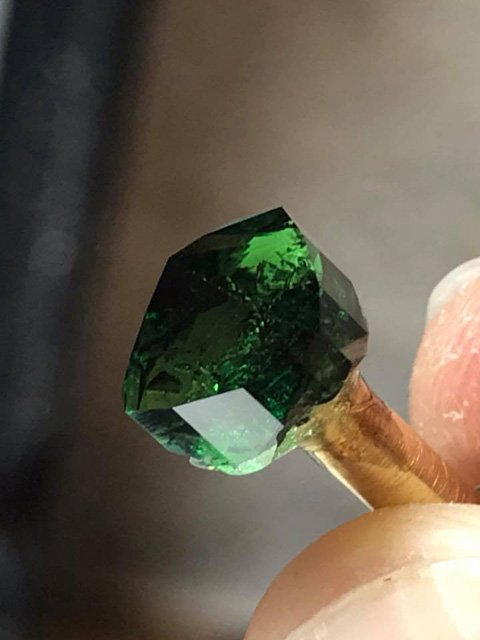 Tourmaline crystal on the dop; Credit Diana Jarrett.Unless we’ve been hanging around a polishing wheel for some time, many of us in the trade aren’t all that familiar with a dop. This critical tool is an essential part of polishing diamonds and gemstones. Dopping is the skill of attaching a rough crystal to a dop stick so it can be positioned over the cutting wheel.

When Color is Being Polished

Gemstone dops can be various sized wooden dowels or metal with its diameter corresponding to the size of the rough. Crystals traditionally attach to the dop with a special wax or other adhesive. These stones are polished on the wheel using water or a liquid slurry which aids in the process and keeps the heat build-up in check.

Lapidaries believe it’s generally best to choose the largest dop possible to fit the stone. But many cutters no longer use wax because of problems running into heat sensitive stones, so they opt for something like super glue instead.

When Diamonds are Cut

Diamonds are a different deal altogether from gemstones. Diamonds are cut using diamond dust embedded onto the cutting wheel. As excellent heat conductors, diamonds transmit heat back to the tools that hold them for cutting. Because of this, dop wax cannot be used like it is with colored stones. It would simply melt. To counter the extreme heat effect, diamonds are placed in a special holder that grips the stone like a pair of pliers without the use of an adhesive.

Once the stone has made it to the dop, now what? The cutter has already carefully inspected the rough and determined the best course to follow. Sometimes it goes as planned. Sometimes he or she gets thrown a curve ball. 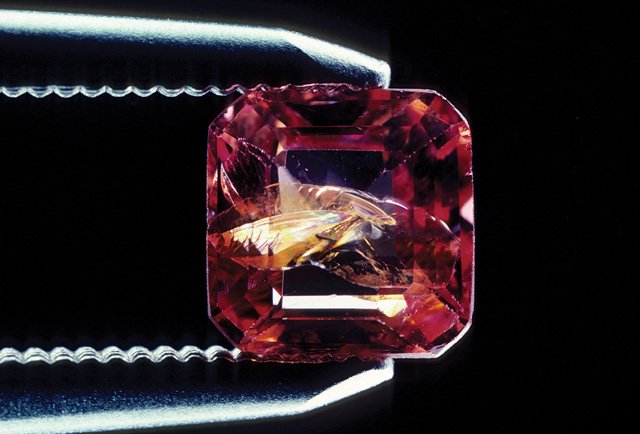 Large feather visible through the table of a faceted spinel; © GIA.

With either diamonds or gemstones, a cutter is always on the lookout for inclusions. The naturally occurring internal or surface blemishes are to be expected, and were part of the stone’s growth process. But what to do with these flaws? They can create cutting challenges, or they can be so intriguing that the cutter permits them to remain in the finished work. Certain inclusions help verify that the stone is natural. When left in the finished stone, they become a fail-safe way of positively identifying the stone from all others.

Cutters encounter challenges with inclusions that can either make or break the final product – literally. Regarding “problem” inclusions in diamonds, master diamond cutter Maarten de Witte says, “I try to forget them as soon as I can.”

But he concedes that some diamond inclusions definitely present a conundrum. “I did have a small feather on the girdle of a rather large diamond recently that gave me heartburn from worry. It was only because another cutter told my customer that it was ‘dangerous’ and could easily ‘travel’ during re-cutting,” de Witte recalls. He hadn’t initially thought the blemish was that big of a deal. “It looked routine to me, but what do I know?” Rhetorical question or not, the answer is obviously he knows a lot. De Witte says the other cutter’s comment gave him pause, though. “After all, the stone was worth around $100K. End of story, I finessed it. But still….” 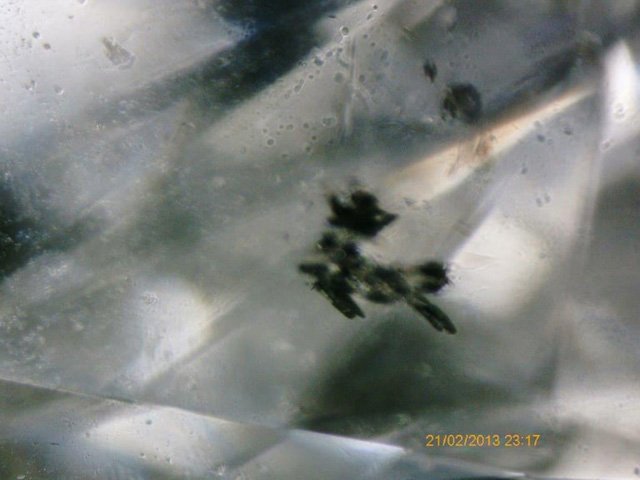 This diamond has a reindeer in flight; Credit Robert S Novak.

Can diamond inclusions actually travel under pressure? “Yes, they can ‘grow’,” de Witte claims, “with too much pressure, or powder or both. You gotta be careful with diamonds that have certain inclusions,” he cautions. It boils down to patience, according to de Witte. Included diamonds “take more time.”

In certain cases, you may not want to remove a stone’s inclusions. Rather, you might aim for a discreet placement on the stone to minimize its presence, or even exploit it by offering a charming surprise to the viewer.

Cutting Up and Around

Owner and designer of the eponymous Derek Katzenbach Designs, Derek Katzenbach creates original, imaginative faceted colored gemstones. He recalls a particular rough requiring both his artistry and a creative solution. “The use of concave cutting is a method I use to hide minor inclusions in gemstones,” he points out. Speaking of a Maine tourmaline he cut, “it had some minor liquid inclusions that would have shown up much more in the finished piece, if it wasn’t faceted to hide them.”

In some cases, inclusions may indicate the geology where the stone was mined. Katzenbach found his tourmaline to be intriguing. “This stone is from the consolidated quarry in Georgetown, Maine. It had a very even spread of liquid inclusions,” he recalls. “Because of the concave faceting, it covered up the inclusions,” he says. “In flat faceted stones, these types of inclusions would stick out much more.”

So Many Ways – So Many Results

With creative gemstone faceting, there are nearly infinite ways to turn out a finished stone. With so many types of faceting to consider, Katzenbach explains, “I’ll use different styles for each situation as the piece of rough presents.” He says there are guidelines to consider prior to making that very first cut. “Each style is cut to maximize its yield, hide inclusions, and make it the most salable stone possible.”

Tourmalines can be touchy, he’s discovered. “I’ve had tourmalines break before, but this was caused by internal stress within the stone. Tourmaline is one of those love/hate stones to work with because they can look flawless but develop large cracks for seemingly no reason whatsoever,” he’s found. “It doesn’t happen often, but it’s happened to every professional cutter I know,” Katzenbach reports. And here’s a curiosity to file under the ‘geology matters’ category. “Usually Afghan blue-green rough is what I hear breaks the most like this,” he says. “So that’s the awful thing. It appears flawless.” 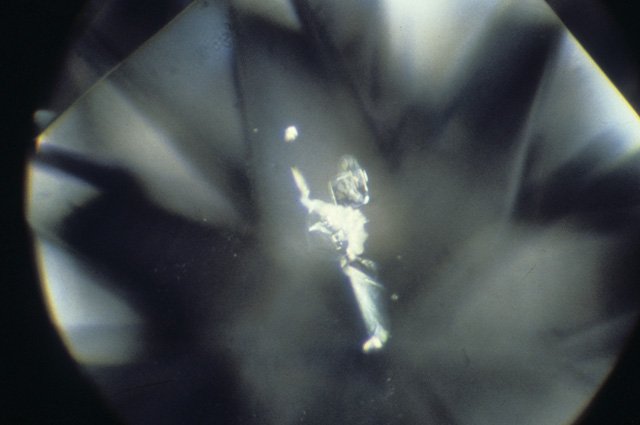 Bench jewelers can orient a setting to hide an inclusion altogether if the stone’s blemish is fortunate enough to hug the girdle or at least become lost amongst the girdle facets. Retailers also have a story to engage their clientele when they explain the difficulty in cutting certain stones. Finally, there are the rare exceptions when a retailer can show off an inclusion which distinguishes it in such a way as to enhance its charisma. I’ve seen an embedded crystal shaped like a heart in a red stone – oh what a darling Valentine gift. I’ve seen the Roadrunner in a champagne diamond – Me-Beep! Lots of collectors would love that stone.

Part and Parcel of its Personality

Inclusions do much more than impede or enhance a stone’s beauty. Let’s help collectors discover which ones speak to them and which ones make a stone as individual as its collector.