The Story Behind the Stone: Tanzanite still makes a big splash

Since its debut in the latter part of the 20th century, the luscious blue-violet Tanzanite gem steadily gained momentum with ardent fans who understood the value of its one-source supply.

All natural gems have a finite supply within their deposits, but when only one deposit exists for a gem anywhere in the world, the fervor swells. Opinions vary as to when the mines are likely to cease production, but estimates range from the next ten to twenty five years, and then its history. Since this single source stone is also a stunner; all the better for gem collectors and jewelry lovers. 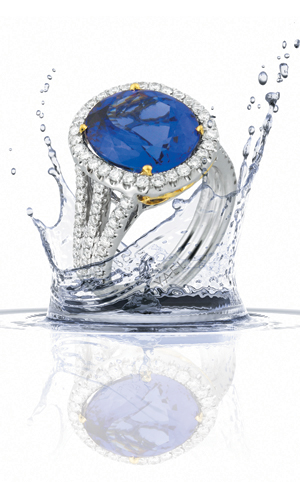 What most devotees don’t know about this vivid jewel is that it actually existed long before Tiffany named the zoisite variety and launched a global campaign to popularize it. They created the name Tanzanite for this magnificent zoisite variety in a nod to its country of origin, Tanzania.

In 1805, the species zoisite was identified in a mountainous area of Austria, and named after a collector, Zois. Why didn’t it receive the wild adoration given to Tanzanite? Well, it was a dark brownish opaque stone – not the glamorous gem we know as Tanzanite. Good enough reason.

Bet you didn’t know there is another gemmy zoisite making its way around the halls at collectors’ shows. This variety is called Thulite; an opaque pink stone found in far away places like New Zealand – and North Carolina – which is also exotic, depending on where you live. So you’ll likely see this opaque stone cut en cabochon for jewelry, or even used in ornamental carvings.

So there you have it. More back-stories about zoisite than you can possibly remember. But we think you’ll keep the sophisticated Tanzanite on your short list; because it still has no peer.

Award winning jeweler Yael Designs draws inspiration from nature, so it’s natural that they would choose Tanzanite as the foundation of their expressive Spring Collection. Tanzanite provides high drama to the artful creations from Yael; winners of many prestigious jewelry industry awards. Their commitment to sustainable practices is reflected in their use of recycled gold and conflict free diamonds, as well as environmental causes.

The company is based in San Francisco near the ocean. “I was attracted by Tanzanite’s royal blue and violet hues,” remarked Yehouda Saketkhou, CEO of Yael Designs. “I often walk around the beaches of the Pacific Ocean and think this beautiful stone tells the story of our blue planet, dominated by oceans that are in dire need of protection.”