The Story Behind the Stone: The Little Black Stone

Black diamonds are on an upward course after years of being a misunderstood stone – or even worse, thought of as a manufactured gem. Still, mainstream consumers know little about this fascinating jewel. Fortunately, their rich story can fuel public interest and provide jewelers with fodder to tempt their customers with this monochromatic nugget.

Various global deposits have produced black diamonds although not all were destined for the jeweler’s bench. Diamond mining’s glory days in Brazil’s 19th century and later in South Africa exposed awesome specimens that intrigued diamond aficionados. The treasures were quickly spirited away into private collections. Unattractive blackish rough that could not be successfully polished for jewelry was routinely classified as industrial-use carbonado.

Out Of This World

To demystify the world of black diamonds, let’s start at the beginning. Scientists have formed various intriguing theories as to their origin. All agree however, that carbonados as they are known are indeed ancient. Atomic measurements date the stones close to four billion years old. During that era, our earth was a bull’s eye for cataclysmic meteoric activity. Scientists eager to link these black beauties to one another built a case as to the origin having been a global meteoric event. Findings revealed that all black diamond crystal structure bore similar isotopes of carbon and nitrogen. Those critical discoveries suggest a common origin for all of the material irrespective of where it was found. Distinguishing features of this subset of diamonds were often an irregular shaped undefined rough with greater porosity. Many such crystals were also less dense, yielding a generally dull overall appearance.

Thankfully not all black diamonds are beleaguered with these unattractive traits. When a black crystal is rich and uniformly opaque, free of surface reaching fractures, we’re on to something pretty extraordinary. The legendary 33.74 carat pear shaped Amsterdam Black Diamond from the 1970s was destined for industrial use until it was discovered to be tough when it met with the diamond saw for the first time. The African origin crystal was later cut into a fetching pear shape that earned $352,000 US when it sold at Christie’s Geneva in 2001. Today its estimated value looms in the multi-millions of dollars.

For the cognoscenti, the name Fawaz Gruosi leaps to mind; a Swiss jeweler widely heralded for generating the craze for black diamonds in the mid 1990s. His kingpin, the Gruosi Diamond is a heart-shaped stunner weighing in at 115.34 carats. The dazzling heart is the focal point of a necklace incorporating almost 59 carats of smaller black diamonds along with white diamonds and garnet for accent.

While these colossal size rocks may have introduced the world to black diamonds, it’s the imaginative designer who familiarizes today’s consumer with accessible black diamond jewelry. Black stones aren’t nearly as dispersive as their white counterpart due to their semi-to-opaque nature, so manufacturers often use myriad small black diamonds placed closely together on a single item. This way, the piece has more facets and light catching surfaces to create that desirable sparkle-effect.

Innovative jewelry designer Sarah Graham of Sarah Graham Metalsmithing was an early adapter of implementing black stones in her artful jewelry. She’s witnessed the transition from consumers’ lack of understanding to embracing these inky delights. “For the most part, today’s customer is familiar with black diamonds,” Graham finds. “At least it seems so because they don’t question them the way they did 17 years ago when I first started using them in my designs.” Graham believes jewelry consumers are a savvy bunch today, especially serious collectors. “I think the last decade has seen so much innovation in jewelry design, particularly with alternative materials, that nothing seems to throw customers off guard anymore.” 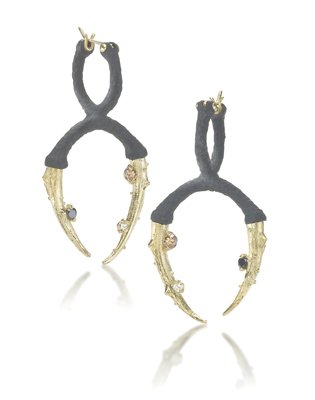 New Kid on the Auction Block

Gemologist-appraiser Jo Ellen Cole, owner of Cole Appraisal Services, Los Angeles, has seen more black diamond jewelry at auction than coming through her doors for appraisal. The reason, she concludes, is that jewelry at auction includes more modern pieces. Appraisal jewelry often represents older pieces brought in for current valuation. She’s developed a fondness for these sophisticated sparklers. “They are a compelling counterpoint to large white diamonds set in jewelry,” Cole explains. But when it comes to large black diamonds in jewelry, they have a distinct advantage too, she points out. “Large black diamond price-points compared to same size colorless diamonds are so much lower. A brilliant designer can create a jaw-dropping stunner from black diamonds that would be untenable if it were fashioned from a beautiful same-size white stone,” she says.

Couture designers consider black diamonds to be the jewelry equivalent of the ‘little black dress’, Every woman needs at least one, as black diamond jewelry can segue seamlessly from casual daytime to formal wear. They are neutral; something that makes them a must-have for elegant evening wear. But city gals with a monochromatic edgy business wardrobe gravitate to its understated chic too.

Black diamonds coordinate with so many other jewelry pieces; some of which a customer may already have in her jewelry wardrobe. But they look stylish in combination with diamond and gemstone jewelry the retailer can suggest to the customer trying on a black piece. “My stacking ring customers are most likely to incorporate black diamonds into their purchase. Black diamonds generally look best when combined with other diamonds that sparkle. Alone, black diamonds aren’t very popular, but when used to complement a look that is built around a variety of stone and metal colors, they are a really interesting addition,” Graham tells us.

This niche diamond has great potential to be a long-lived asset for jewelers and to be beloved by consumers. A sophisticated black diamond elicits metaphors such as smart, sleek and cosmopolitan. Like the little black dress, a woman will find black diamonds perfect for so many occasions, whatever her lifestyle.