Sapphire in The Spotlight

Recent news of the Royal Wedding of Britain’s Prince William and Kate Middleton has renewed public ardor for sapphires. Their cobalt tint has kept them in Most-Favored status with royalty for centuries. Collectors might say that the most coveted sapphires are those from Kashmir, owing to their intense blue and nearly velvet-like appearance. But Madagascar, Sri-Lanka and India are amongst the other global sites that produce valuable sapphire for collectors of the world to enjoy. 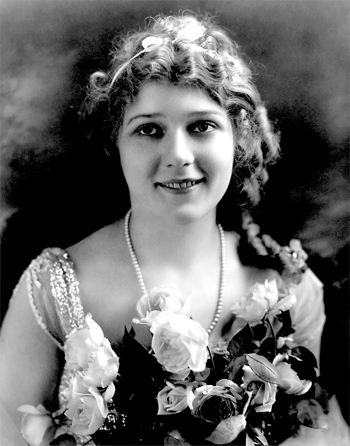 Mary Pickford, called America’s Sweetheart early in the 20th century, bequeathed the Star of Bombay to the National Museum of Natural History at the Smithsonian Institution in Washington, DC.

Some sapphire is valued not so much for its pristine clarity as it is for its phenomenal aspect of producing stars when carefully cut en cabochon.

Star sapphires have long been collected by royalty and commoners who could afford such extravagances. It’s interesting to note that in motion picture’s earliest days, those jaw dropping baubles that stars draped over themselves on-camera were not fakes loaned to them by the wardrobe department, but real jewels belonging to the stars. And one of the world’s most celebrated star sapphires called the Star of Bombay came into the possession of Old Hollywood royalty.

The Star of Bombay is a magnificent 182 carat (36.4 g) cabochon-cut dome shaped star sapphire. The violet-blue gem is best known for being given to silent film legend Mary Pickford by her husband, Douglas Fairbanks, Sr.

Its name, Star of Bombay is a blatant and unfortunate re-direct of its actual place of discovery which is Sri Lanka. India has an ancient history with gemstones, still it has never produced a star sapphire that could come close to rivaling the enormous star sapphires discovered in Sri Lanka.

The big deal with natural star sapphires concerns the appearance of very distinct six-rayed stars extending down to the girdle of the stone, when viewed under direct light. The Star of Bombay delivers a wallop in the asterism department. The rays are well developed, rod straight, and extend completely down the side of the stone. That’s a biggie in the star stone world.

What Makes a Star Sapphire

Rutile needles, referred to as silk, are present in the stone, and account for the ray-like effect. When a crystal contains these natural inclusions, a clever stone cutter orients the stone in such a way as to maximize the effect of the rays by polishing a high domed cabochon onto the stone. The Star of Bombay is celebrated for its remarkably good translucency and a rich violet blue color.

The Star of Bombay sapphire belongs to the mineral species corundum. Pure corundum is colorless, but trace amounts of transition elements like vanadium or chromium result in different colors in the crystal. The Star of Bombay’s violet-blue color is caused by the presence of titanium and iron giving the blue tint, and vanadium contributing to its violet back color.

The famous jewel was acquired by New York jeweler Trabert & Hoeffer, Inc., and was set in a platinum ring and sold to Douglas Fairbanks, Sr., one of the great silent screen icons of the 1920s and 1930s. His equally famous wife, actress Mary Pickford, was called America’s sweetheart.

The Real Deal with Hollywood Jewels

During the early years of American film making, stars often wore their own fabulous jewels in their movies. This was particularly thrilling for audiences when the entire nation fell into the Great Depression. Glimpsing at the stunning jewels provided relief from peoples’ day-to-day drudgery.

And during those years, star sapphires appeared to be wildly popular amongst movie stars. Besides the Star of Bombay there are other instances where star sapphires were used in high profile engagement rings of the period. Douglas Fairbanks, Jr. presented actress Joan Crawford with an engagement ring featuring a whopper-sized 70-carat star sapphire. And actor William Powel proposed to a young platinum haired Jean Harlow with a large star sapphire ring set.

While the Star of Bombay is not hobnobbing in tinsel town any more, grateful gemstone lovers are thankful that Mary Pickford-Fairbanks, Sr., bequeathed her colossal star sapphire to the National Museum of Natural History at the Smithsonian Institution in Washington, DC so that everyone can glimpse at this unique gemstone.

Today we remain grateful to those intrepid miners and dealers scouring far flung regions of the globe in search of star sapphires to satisfy modern jewelry lovers. True, many of us can ill-afford the likes of the Star of Bombay, but more accessible carat sized sapphires bring their affordability within reach. When we collect sapphires of any kind, including the eye catching star sapphires with their shimmering six rays, we link ourselves to ancient potentates and aristocrats who understood the power of nature’s beauty.