The Story Behind the Stone: The stones cry out

“The stones of the wall will cry out, and the beams of the woodwork will echo it.”
Habakkuk 2:11 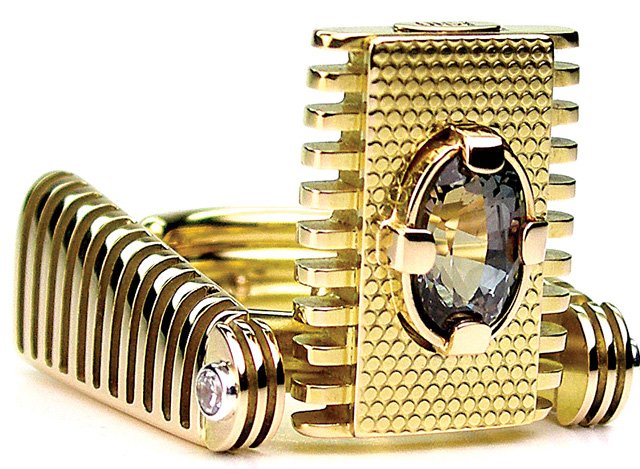 Golden Chameleon ring with Alexandrite; Courtesy Claudio Pino.Ancient Scriptures dating from the late 7th century BC record this mesmerizing verse; creating a startling image in the reader’s mind. Actual stones calling out from their walls? Yet gemologists, geologists, and jewelry lovers can all relate to this unusual concept. Perhaps the reason so many people have entered the field of gemstones in some way or another is because one day a particular stone called out to them.

We may get stopped in our tracks when encountering the hypnotic appeal of diamonds – or the play of color winking at us from an ancient opal. Then, there are color-change stones. This infinitely repeatable trait discovered in some gems never loses its appeal.

Iconoclastic jewelry designer Claudio Pino, celebrated for his compelling sculptural jewelry, recounts a light bulb moment in his career when a stone actually spoke to him. And then, later on, he completed a ring whose main attraction was an Alexandrite – it was this stone that cried out to him.

“Of course, I do remember that special moment of holding an Alexandrite for the first time,” Pino recounts. “It was in Tucson, in 2000. I did a full year of mineralogy internship in Albuquerque, New Mexico. Every week, I visited a different mine,” he recalls. “One day, I went to the Blanchard Mine in Bingham, New Mexico. Entering that old mine, and opening my black light, I saw veins of fluorite in the rock – all changing colors to vivid green, orange, and purple. It was spectacular!” 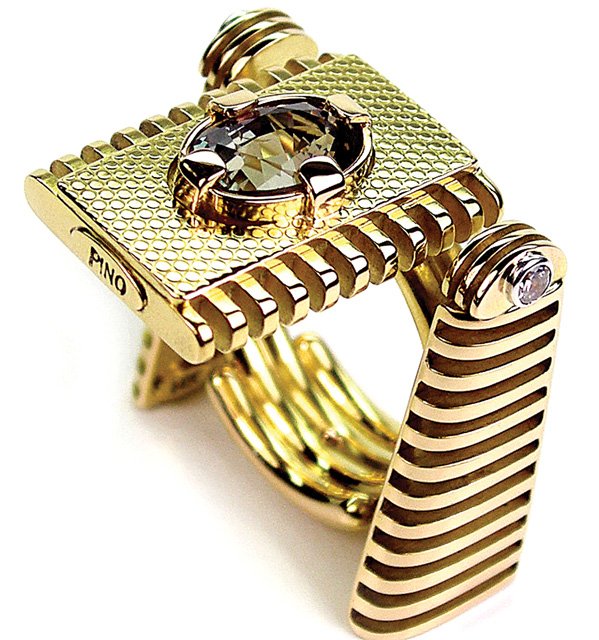 “A few weeks later, at the Tucson Gem Shows, I saw a magnificent color changing gemstone, an Alexandrite,” Pino explains. It brought back that mesmerizing moment of revelation he experienced at Blanchard Mine. “It creates a feeling of surprise,” Pino says. “It’s the feeling of being alive, that joy. I fell in love with this special gemstone.” It was years later before he had an opportunity to work with Alexandrite. “It was requested by a client; and for me,” Pino found, “just by holding it in my hand, I became inspired!”

It’s All About the Story

Alexandrite was discovered, the colorful story goes, in Russia’s Ural Mountains in the 19th century. The stone changes from red-wine to blue-green under different lighting. This rare color-change variety of chrysoberyl was named in honor of Tsar Alexander II of Russia. Pino has developed his own opinion about what makes this unusual stone so enduring, so appealing. “Many say that Alexandrite enhances feelings of creativity and I do believe this,” Pino says. He sees something utterly enchanting about the stone. Not only does it change color, he explains, but its properties are really unique.

Color-changing properties unique to Alexandrite are referred to as the ‘Alexandrite effect’. Although the mechanism behind this peculiarity is quite technical, simply stated, it’s the result of trace amounts of chromium in that gemstone. The chromium elements create strong light-absorption in the yellow and blue parts of the color spectrum, allowing the stone to change from red-purple to blue-green when viewed under different lighting.

“As soon I held it in my hand,” Pino reveals, “something happened, and the creative process began.” He elaborates more about his thought process in creating an original ring with the unusual jewel. “For the design, I became completely mesmerized by the amazing color-changing effects it revealed; from green to yellow, orange to purple, like leaves starting to blanket the landscape when nights get cooler.” This impression lead Pino to explore the concept of color mutation more deeply by adding texture on the gold ring that embraces the gemstone.

Pino’s original ring design with its unexpected parts, mirrors the changes that occur with Alexandrite too. “Depending on how the light is directed, a completely new ring is revealed to the wearer,” he points out. “Textures, colors, shapes; each angle offers a different universe to be explored.” 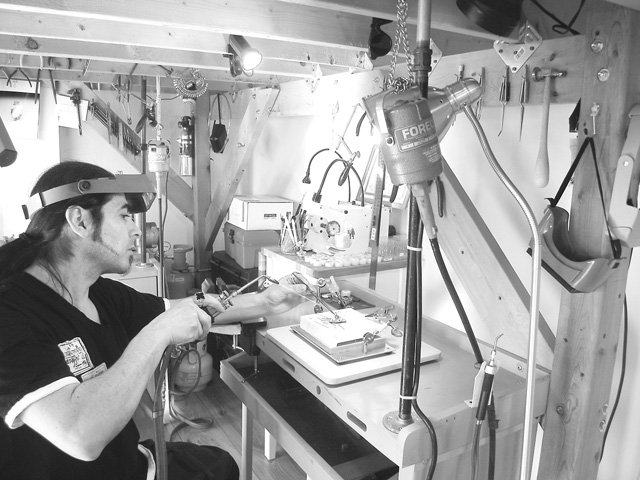 Claudio Pino in his studio. Courtesy of Longpre.

Pino’s ring design focusing on the central Alexandrite was aptly named Golden Chameleon. Its new owners, Pino says, received it with a “Wow. It looks amazing!” He says that he created this very personalized piece for a fantastic couple who love each other very much. “To have the opportunity to design a ring inspired by someone, for someone and represent their love is a gift to me. I feel so privileged to do this. It’s a real passion.”

It wasn’t enough to simply draw inspiration from the rare colors of Alexandrite to produce his ring, Pino explains. In 2009, he traveled to Egypt for an art research project, courtesy of an art grant from Conseil des Arts et des Lettres du Québec. “To deepen my knowledge on the history of engagement rings, I visited the Egyptian Museum in Cairo and the Alexandria Library museum, which contains the largest collection of ancient Egyptian Jewelry in the world. This collection includes one of the first engagement rings, which was owned by Queen Ahhotep, (17th Egyptian Dynasty c. 1560–1530 BC) and mother of Ahmose I,” he remembers.

“Seeing the Pharaohs’ jewelry and meeting with well-known specialists allowed me to better understand the ancestral techniques and customs while learning more about the symbolic importance and origin of the engagement ring,” he says. This period of research had a profound impact on Pino’s artistic career. “It is from this rich experience that I designed the Vena Amoris Collection.” This influential chapter of his life later shaped his creative process when designing his Golden Chameleon Alexandrite ring.