The Story Behind the Stone: To cut or not to cut

Diamonds – either ancient ones or poorly cut modern stones are routinely re-cut to improve clarity and color. No biggie. But when it’s an historical gemstone people can have strong opinions.

The famed origin blue Wittelsbach Diamond was once called the most famous diamond you never saw, because the elusive diamond with a pedigree this long was the finial to the Bavarian crown until the 1920s and remained in the royal Wittelsbach family until 1951. Depending on which provenance you like, the paper trail for this early diamond commenced in the 17th or 18th century. The 35.56 carat Fancy Deep Grayish Blue VS2 diamond was kept secluded in a private collection since 1964. 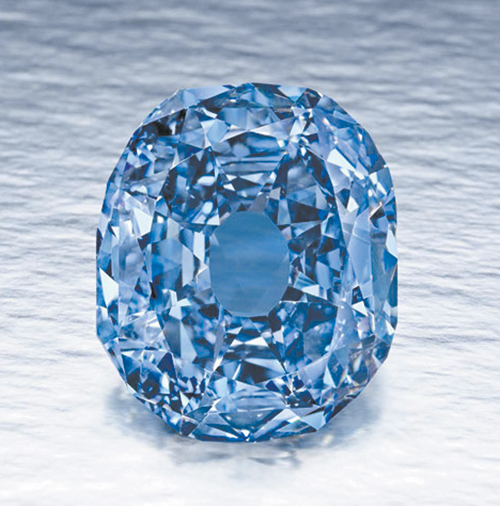 But in 2008 the famous stone once thought to be linked to the Hope Diamond, was sold to diamond dealer Lawrence Graff for $23.4 million US. Right after the sale, Graff decided to re-cut the historical stone ‘to remove damage to the girdle and enhance the color.” That’s hunky dory for ‘normal’ diamonds, but verboten for a legendary stone protested numerous experts – some comparing its renovation to over-painting a Rembrandt.

Well they re-cut it in early 2010 modifying the original shape polished centuries ago. So now it’s a modern stone, renamed Wittelsbach-Graff. They slimmed it down to 31.06 carats losing 4.45 carats in the deal. The cut warranted a revised laboratory report and it got one from GIA. The new color is the preferred Fancy Deep Blue, the same color grade given to the Hope Diamond. The clarity rose from VS2 (very slightly included) to IF (internally flawless).

But not all diamantaires are chagrined with the Wittelsbach’s overhaul. Respected diamond cutter Maarten De Witte, an expert at cutting important diamonds is also a strong proponent of well designed specialty cut diamonds. “The stone itself (Wittelsbach) is famous for its history, and for being a large blue diamond, not for its cut,” he notes. De Witte would never recommend a massive re-cutting which renders a renowned diamond unrecognizable.

The Hope diamond was re-cut at various stages, and could benefit today from a cut which further unlocks its light performance and elegance, he adds. “By thoroughly documenting the history of the important Wittelsbach, and by improving its beauty with a modern cut, you also exhibit the advances made in.”

The famed Wittelsbach diamond with its near-look-a-like the Hope diamond went on display at the Smithsonian’s National Museum of Natural History in Washington D.C in January 2010 and will be there for gem lovers to ogle through August 2010.