The Story Behind the Stone: Tutti Frutti – It’s so much more than

Little Richard may have wailed, “Tutti Frutti, aw- rooty” in mid 1955, but the House of Cartier was decades ahead of the flamboyant rhythm and blues singer.

Jacques Cartier originally created his luscious over-the-top jewelry design in the 1920s using richly hued sapphire, ruby and emerald, often accented with diamonds. This opulent combination became synonymous with the House of Cartier. Genuine tutti-frutti jewels of the era were set in platinum, as were all haute couture jewels of the day. 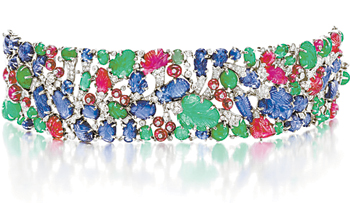 The gemstones were step-cut; baguette, square or princess cut, emerald cut, like many of the popular diamonds were of that era. But also he utilized cabochon cuts and some had leafy shapes, or other fanciful carvings added to them. The combination of stone colors and cuts were thrilling to jewelry collectors then and now.

Socialite Daizy Fellows commissioned an enormous tutti-frutti neckpiece from Cartier in 1936. Known as an elegant woman of taste, and possibly one with outrageous taste, the stand out piece was deliberately head-turning.

The term tutti-frutti is still occasionally used in reference to colorful jewelry today. But the iconic Cartier meant it to be one made of the trio of precious gemstones; ruby, sapphire and emerald, and possibly diamonds.