The Story Behind the Stone: Warming up to Topaz

Clever designers and retailers looked at exotic, unknown, or under-utilized colored gems this year at ’s Gem Fair and other trade shows.

In a market re-adjusting itself to the new norm, jewelers with foresight are offering customers more colored stone options in broader price points with the hopes of finding jewelry consumers’ sweet spot. 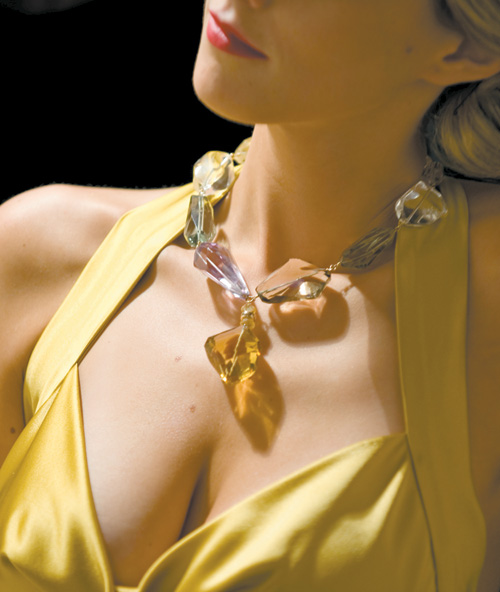 The upswing of this scrambling to entice a more robust jewelry business once again has resulted in some appealing colored stones coming to the fore. One such gem, topaz, is no neophyte to the trade, but smart designers are finding a renewed interest in it with their clients – especially when the back story is delivered to the consumer.

Topaz fans adore the depth of tonal qualities seen in this stone. Its ability to take a high polish adds to its attractiveness. This ancient and very transparent gemstone likely owes its name to a derivative of a Sanskrit word for yellow fire. In its pure form, the silicate mineral is colorless, but impurities in the stone tint the crystals to nearly any shade of the rainbow.

Yellow varieties of topaz are so coveted that each subtle nuance in shade acquires its own name for better identification. Imperial, Sherry, and Golden are a few terms which separate the yellow topaz variations.

Collecting this jewel has been ongoing for centuries. Renowned 18th century gem trader Jean Baptiste Tavernier wrote about a giant topaz weighing nearly 158 carats. And there’s more where that came from. is known for several boulder sized topaz deposits found in pegmatite weighing several hundred pounds. Other regions around the globe also produce topaz. Deposits are found in , home to Imperial Topaz, and , , , , , , the , and a host of other sites.

Jewelers can easily recognize authentic golden topaz from yellow quartz when they are examined together. Topaz has the more desirable higher ranking of 8 on the Mohs scale and proves denser in a specific gravity test. All this adds up to a very lustrous jewel that takes a superior polish over similar colored gems. 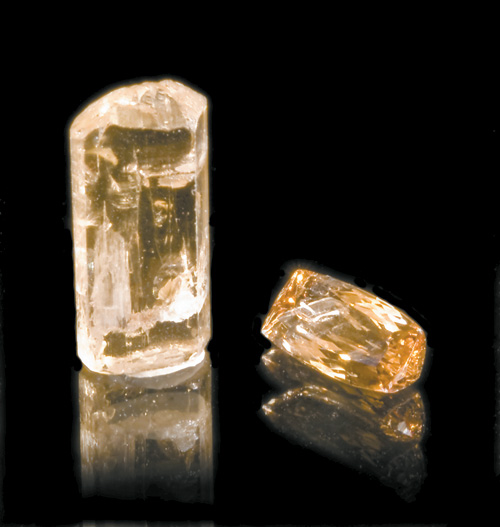 Topaz crystals are often found in elongated rough owing to their formation in tough pegmatite veins.

Jewelry designer Caldwell Sutherland works with a variety of colored gems for her couture collections. She selects the fiery toned topaz for her original necklace shown here because it draws the observers’ eye toward the slow intense smolder in this warm stone.  For her, the golden topaz pendant was an obvious choice as a focal point of her bold and modern neck wear. Since “it drew my eye to it immediately” she knew it would also resonate with her clientele, who only collect what speaks to them personally.