The Story Behind the Stone: When bracelets were King 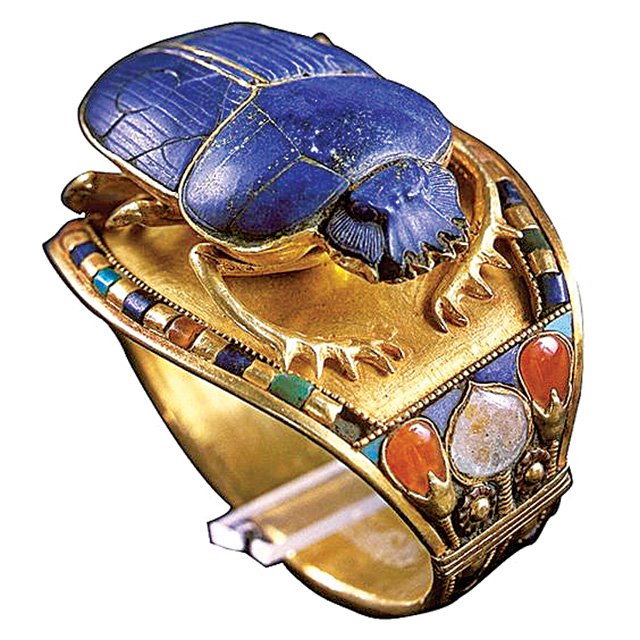 Childhood scarab bracelet of Egyptian Pharaoh Tutankhamun.The practice of adorning oneself with beautiful metals and stones is hardly a new concept. From ancient civilizations like that of Egypt to modern times, we have been endlessly fascinated decorating ourselves. And it’s not just the women who are compelled to decorate themselves with extravagant jewels. Persian, Babylonian and Egyptian men, especially nobility, were heavily bedecked with precious ornaments.

Bracelets were a big item, as they emphasized arm gestures like waving or condemning foes in battle.

We need only to look at museum relics to understand the importance of bracelets for the male gender in ancient times. In early Egypt both adults and children wore brightly hued jewelry made of gold and precious stones. For much of its history, jewelry was an important story telling device. Not only did it convey the power and status of its wearer, but it offered protection against evil spirits and was essential when burying the deceased to insure a successful afterlife.

In the 1920s when Egyptologist/archaeologist Howard Carter finally discovered King Tutankhamun, he uncovered the story of Egyptian royal life in 1332 BC. Amongst the enormous rooms jammed with unimaginable treasures, they found an ornate box tucked away. In it was a carefully preserved small scarab bracelet amongst King Tutankhamun’s burial hoard. Although tiny in size, it was quite similar to the bracelet found on Tutankhamun’s mummy. Clearly this diminutive gold band with carnelian, lapis lazuli, quartz and turquoise belonged to the little boy pharaoh.

Royal or Not Here We Come

The penchant for bracelets as a masculine adornment has lasted through thousands of years. Royal men wore cuffs and link bracelets through the centuries. And I’m sure with each culture, these favored jewelry items had their stories to tell as well. Embellished with crests or animal figures, these pieces revealed the noble position of its wearer, and often his authority and wealth.

Today, men’s bracelets have a more personal place in the lives of its wearer. It can simply indicate the man’s style preference, or even something more, like a social or political statement. 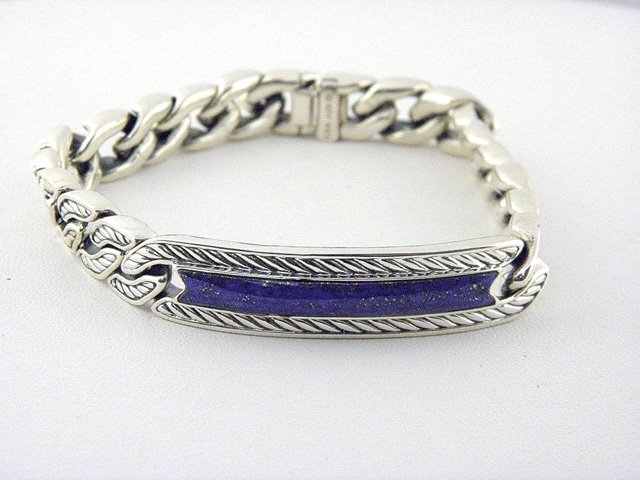 Lapis lazuli is featured in a modern man’s ID link bracelet from David Yurman.Britain’s Prince Harry is never seen without wearing his bracelets, even to the most formal of occasions like his Spring 2018 wedding to Meghan Markle, now Duchess of Sussex. In fact, it’s known that he’s been wearing the same bracelet on his wrist for 20 years and counting. The thin metal accessory is rich with personal meaning for him. “I first came to Africa in 1997, straight after my mum died. My dad told my brother and me to pack our bags – we were going to Africa to get away from it all,” he recalled. In Africa, Harry picked up the bracelet and has been wearing it ever since.

Royal or not, bracelets as a man’s accessory are hotter than ever. A number of brands make bangles, links, rubber and metal cuffs and more. Manufactured in precious metals and stones, or as simple natural elements, these tastemakers are fashion forward for men of all tastes.  Each bracelet that men select today can become a part of their own story in the making – and all while casting a stylish vibe on its wearer.