The Story Behind the Stone – Savoring Tsavorite

There aren’t many ‘newly discovered’ gemstones. Most gems have been around for centuries if not thousands of years. But the earth has not given up all its treasures. Every so often, someone stumbles upon a new stone that upsets the whole idea of what are precious stones.

Where You Least Expect It

Such is the story of tsavorite. The stone is a relative newbie in the gem world. It was discovered quite by accident in the latter half of the 20th century by a British geologist kicking around the East-African bush. Some peculiar nodules spread over the landscape that he stumbled upon caught his eye with their shiny green bits. These sparkly rocks turned out to be a rare green garnet that was eventually called tsavorite in a nod to the Tsavo National Park near its place of discovery.

Couture jewelry designer Laura Jackowski-Dickson, of LJD Designs happens to love these verdant treasures. As a graduate gemologist she understands the value of these rare green jewels. According to Jackowski-Dickson, “It is difficult to acquire top quality tsavorite.” So imagine the challenge facing her when she set out to create a pair of tsavorite earrings. Not only did she have to search for equal quality stones, but the sizes had to match. Was it difficult to find a perfectly matched set of tsavorite for her earrings, we wondered?  “Oh yes, like finding a needle in a haystack,” she revealed. “We went through about a hundred stones to match them up; cut, carat weight and size, plus quality, and color. That’s why I chose platinum as the metal.”

The Most Dazzling Green You Never Heard Of

According to her, the general public and even jewelry collectors are not so savvy about tsavorite. But she does her part to present this jewel in its proper light. “Tsavorite garnet is definitely an under-appreciated and little known stone. I find it much more appealing to the eye in color than an emerald.”  Once people learn about this gem and hear the remarkable back story, they can develop a real appreciation for it. Designers like Jackowski-Dickson who understand the value of this exceptional stone are on the forefront of exposing collectors to its charm.  “I think when it is presented as an exotic gem people take more of an interest in it. But yes, it has a way to go before it becomes the new sought after stone.”

Retailers and designers know the traits of this rare green garnet, but don’t expect consumers to be aware of it. Just pairing the words green and garnet together in the same phrase is mystifying to most shoppers. By explaining that yes, most garnet we know of is indeed red, this rare green variety defies previous perceptions and opens the conversation for other intriguing details about this stone. You never want to sell one stone at the expense of another, but you can make some emerald to tsavorite comparisons. Many jewelry fans are crazy about emerald because of its captivating green hue. Subliminally, green represents life or even new life and with that hope. Since there are so many aristocratic jewels bearing emerald, there’s an implicit association to royalty to boot. 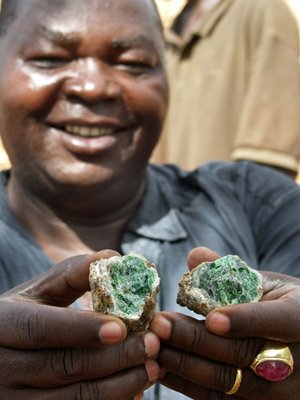 Something to Talk About

That said, for your clientele who are drawn to emerald, you can point out several truly remarkable characteristics of this jewel. It’s a one source stone (until it should turn up elsewhere someday) found in dangerously inhospitable bush lands of East Africa. Its recovery is no easy feat. Larger carat stones (those over 5 cts) are almost unheard of. Tsavorite contrasts dramatically against emerald in its intense true green, as contrasted to both emerald and green tourmaline. Emeralds by the very nature of their recovery are usually full of concussive driven inclusions. You don’t see these types of inclusions on tsavorite due to its density of color, and its different recovery methods.

A substitute for emerald? We think not. Tsavorite is a dynamic beauty with legs to stand on its own. Its story is the stuff that made “Out of Africa” so memorable. Your customers want a unique choice for their personalized jewelry selections, and this does a splendid job. Now it’s your turn to talk… to your customers.