The strength of a small business

Hampton is a small city just south of Atlanta. It’s occasionally made famous during NASCAR season when the population quadruples because of events at Atlanta Motor Speedway. 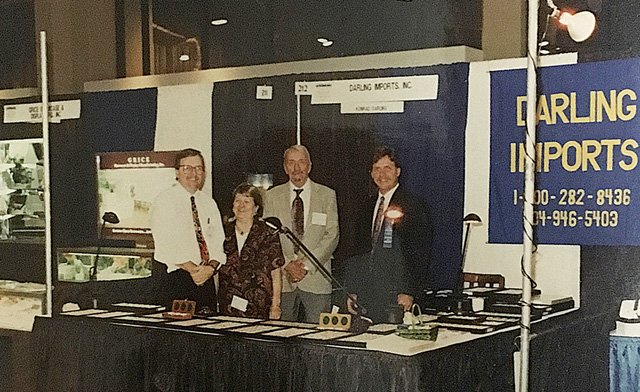 However, the less than 8,000 person city is the perfect size for a small business focusing on loose, color gemstones.

More than 25 years ago, my uncle, Harold Darling, grandfather, Mr. D, and father, Konrad Darling, started Darling Imports in Hampton. Many might be familiar with the company, but perhaps not the origin. This is a story close to my heart. Not just because it’s about my family but because it shows what makes this industry incredible: the people.

I sat with my uncle and father and talked about their beginnings over heaping piles of sushi (surprisingly another thing a small, landlocked city does well). This is their story, their trials and tribulations, as well as their successes and why they could never quite quit the industry.

Like many American families, the Darling family is one of immigrants. My grandfather was a US soldier and my grandmother a German citizen. They moved here to start a family after World War II and to pursue the “American Dream”.

My father and uncle lived in Germany during their childhoods. They learned the beginnings of hard work while working at the commissary. Eventually they came back stateside, but their time at the commissary cultivated the hardworking, people-first charm they would build a company around.

Back home, the seemingly inseparable brothers both attended the University of Texas-Arlington together. Avid soccer players, this was their life and all that mattered.

After their collegiate soccer careers ended, they found themselves at a crossroads. Harold went the military route, spending a few years stationed in Germany deciding if this was the future he wanted. “I had some interesting jobs with the military. One that stood out was working in a factory that built bomb lifts.” Military life was a short-lived future, lasting only three years. Both Harold and the military decided it was best if they parted ways

As for Konrad, his immediate future after college was about as successful as Harold’s, with odd jobs that never quite stuck. One as a traveling salesman that ended with no paycheck due to the lack of actual sales. “I wasn’t very good,” he said while laughing, “but, it showed me I needed to change my attitude.”

After the lack of immediate success apart after college, the pair found themselves together once again. Working at Army and Air Force Exchange Service (AAFES) alongside their father, Mr. D, the beginnings for a new dynamic duo were underway.

While logging in the hours as quality control specialists at AAFES, it jump-started their desires to build something more. Finally, they got the break they were looking for through Mr. D.

Frank Golden, owner of J. Frank Golden, was a wholesaler of loose color gemstones and friends with Mr. D. “We just realized this was the time to do something different and we had to do it now,” Konrad said. “We always wanted to work together, that was always a future goal,” Harold added. Their venture into the world of color gemstones began. 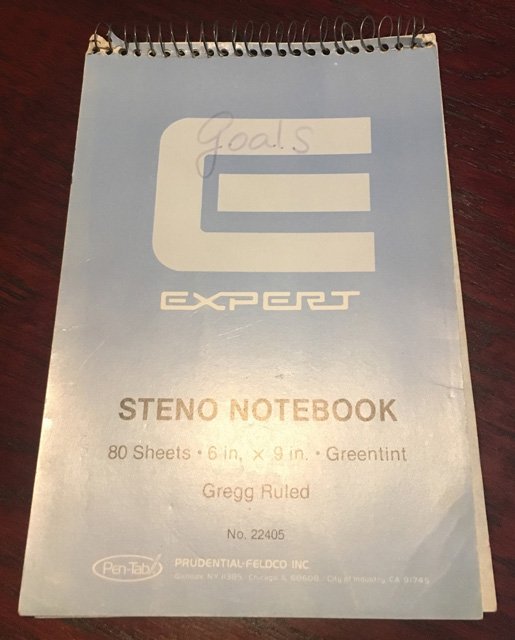 Harold’s original notebook of “Goals” for Darling Imports.For little more than a decade, they worked side by side at J. Frank Golden. They put in the hours building a catalog and color guide for all the gemstones, while also bringing in as many new clients as they could. Now, their life consisted of countless weekends on the road, traveling across the country, but it became a passion. They weren’t even discouraged when the air conditioning blew in a hotel room in Tucson that was used as both a place of business and sleeping. It made no difference being there all day and night, never leaving the inventory. They were hooked to the business. Like a chef cooking an incredible dish for the first time, they found their calling.

The “Grolsch Days,” are what they most remember. Grolsch is one of their favorite German beers, known for their distinct green bottles and light, refreshing taste.  As Harold would describe those days, “it was our way to stop and smell the roses, so to speak.” After a few minutes reminiscing, Konrad chimed in, “helped us appreciate the little things like hitting daily goals. We earned that beer and that’s what made it so rewarding.”

Their passion was piqued, but their potential was still not quite tapped. There was still one goal Harold always wanted to achieve. “I wanted to work for myself. That was always the ultimate goal.” But, business was so good! Hitting sales goal after sales goal, the relationships created, profits on the rise, and earning a name in the game, why risk it to start from scratch? “It’s just what I needed to do,” Harold responded.

Both gave it the old college try at side projects. Harold’s venture with his wife, Carol Darling, was called Gifts Made Easy. It revolved around Italian style gifts, jewelry boxes and vases.

Konrad began one with Mr. D, called Darling Imports. No, this is not the one you’re thinking about. Instead, this project focused on leather liquor bottles. Apparently there was a market for this in the 1980s. Fortunately, they would keep the name for a later enterprise.

In 1992, the “Grolsch Days” at J. Frank Golden came to an end. It felt like the post-college days all over again. No stable job, just ideas and a passion for an industry in which they had no involvement.

Like the ubiquitous metaphor, they still had the fire, all they needed was the match. Starting a small company would be a challenge. Starting a small family business was even tougher because everyone in the family – by choice or not – plays an important role. But those fears were put to rest when Konrad’s wife, Domini Re-Darling, made a suggestion. “You love it so much, why don’t you just start your own company,” Konrad recalled. “I think that was about as straightforward as it needed to be,” he says laughing.  Harold echoed that sentiment, “Our wives played the most important role in the start of Darling Imports, without them there is no Darling Imports.”

After being out of work for several months, they took their wives’ advice. In the summer of 1992, they added Mr. D to the company and opened the doors of their own color gemstone wholesale company.

The opening is a joyous beginning for small businesses, but that beginning is filled with doubt and fear of failure. It requires so much to go out on your own and make it work. Sometimes, you just need a little reassurance, recalls Harold.

“We knew we had something going our very first show,” he said. “It was in Charlotte, North Carolina – the Eastern Jewelers Travelers Association (EJTA) Show. This show was set up for the salesman, so you had to be established, but we weren’t. They told us to come anyway because they knew who we were. They liked and respected us. They didn’t have to, but they did, because of what we created previously. During our time working, we built those relationships and now they paid off like we never imagined.”

The mantra for Darling Imports from the start was put the customer first and treat each one like an individual, not a number.

“This industry is built by people and by the relationships they develop,” Konrad said. “Whether it’s a big company or a small one, you do well because people want to work with you. That’s what makes this industry so enjoyable. It’s truly relationship-oriented.”

After more than 25 years of serving the color gemstone community, the passion for people and gems has been the right choice after all.