To Bee or not to Bee?

When Madeleine Albright, the former Secretary of State, donned a wasp pin before an important meeting with Palestinian leader Yasser Arafat, he was visibly disturbed. Brooches had become her diplomatic calling card, a way of non-verbally signifying her mood or intentions. Bees or wasps could signal “something like a sting. I wore wasps on days I wanted to do a little stinging and deliver a tough message,” she explains. 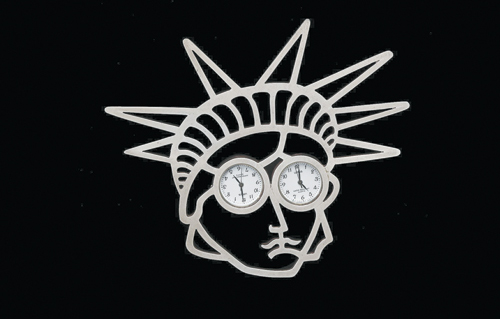 This 1997 Gijs Bakker Liberty Brooch is part of former Secretary of State Madeleine Albright’s collection. Courtesy of the Albright Collection and the Museum of Arts and Design. Photo: John Bigelow Taylor.

It all started in 1994 when the Iraqi press referred to her as an “unparalleled serpent.” Taking it in stride, she began wearing a gold and diamond serpent pin, a circa 1860 estate piece, as a badge of honor. “And so then I thought, well, this is fun, so I went and I bought a lot of costume jewelry to kind of fit whatever the issue was we were going to be working on. When people would say, ‘What are we going to do today?’ or ‘How do you feel?,’ I said, ‘Read my pins.’”

Albright’s collection of roughly 300 diplomatic pins are currently on display through January 31, 2010 at the New York Museum of Arts and Design following the publication of her “Read My Pins: Stories from a Diplomat’s Jewel Box.” A self-confessed jewelry lover, the former Secretary of State has spoken at Gemological Institute of America conventions and will be honored at the upcoming ’s GEM Gala with its Style award.

According to Holly Hotchner, the NY Museum’s Director, Albright discovered that “what she wore had a lot of interpretive meaning to those she was with. The pins became an added way that she communicated.”

In December 1999 a Russian agent was caught listening to signals from a bug planted in a State Department conference room. In her next meeting with Russian officials, Albright handled the tense situation by wearing a large brooch of amethyst, chalcedony and gold in the shape of a bug. Remaining cordial, she let her pin do the talking. The message was received loud and clear. 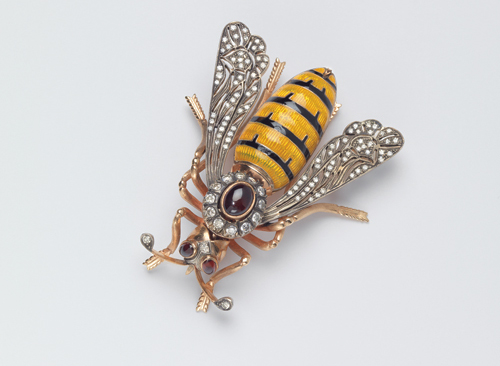 Former Secretary of State Madeleine Albright’s “Bee” (circa 1980, designer unknown) pin. During meetings with foreign heads of state Albright would often wear a pin as an additional means of communication. Photo courtesy of the Albright Collection and the Museum of Arts and Design.

When she was negotiating the Antiballistic Missile Treaty, she wore an arrow-shaped pin. Albright recounts, “All of a sudden the Russian foreign minister looked at me and said, ‘Is that one of your interceptors?’ and I said, ‘Yes, we make them very small.’”

The former Secretary of State’s “pin diplomacy” became so established that foreign leaders would regularly read her pins to interpret her message. President Putin told President Clinton he would look at her pins to try to figure out how she was feeling or what she was trying to say. Albright recounts one incident. “I was very concerned about what the Russians had been doing in Chechnya and denying everything, so I wore the three monkeys, the ‘hear no evil, see no evil, speak no evil’ monkeys, because they were denying what was going on. I’m not really sure he got the message.”

The pin collection includes all-purpose “good mood” pins such as ladybugs, flowers, butterflies and hot-air balloons as well as a “whole menagerie” of more menacing spiders, bees, wasps and crocodiles. When she met with Nelson Mandela, Albright honored his native by wearing a zebra pin. One of her favorites from the collection is a dove pin presented to her by Leah Rubin, the wife of assassinated Israeli Prime Minister Yitzhak Rabin.

Throughout history, pins and jewelry have been worn as symbols of power, sending messages. “Interestingly enough, it was mostly men who wore the jewelry in various times, and obviously crowns were part of signals that were being sent throughout history by people of rank,” Albright explains. 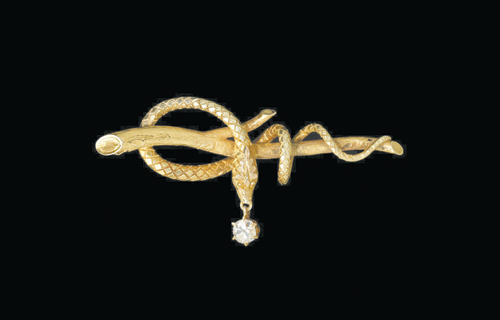 “It’s a real icebreaker.” While a man may open a conversation by commenting on a tie or the weather, the first female Secretary of State has discovered a creative use for pins in such situations, taking advantage of her gender. “I love being a woman and I was not one of these women who rose through professional life by wearing men’s clothes or looking masculine. I loved wearing bright colors and being who I am.”

Albright has shopped the world for her brooches, including local international bazaars as well as ’s Tiny Jewel Box, a favorite for her costume pieces. Asked what she would wear now that her collection is on display, Albright doesn’t miss a beat. “It’s a good excuse to go out and buy more.”

Mia Katrin is an award-winning, internationally celebrated couture jewelry designer, specializing in one-of-a-kind and limited edition high-end necklaces with precious gems in 18-24 karat gold and platinum. Her Collections, which have been worn by A-List celebrities, are featured in many top galleries and stores throughout the country, where she regularly hosts Trunk Shows. Contact Mia via her website, http://jeweljewel.com, e-mail info@jeweljewel.com or call (877) JEWEL-MY.