What’s up with rubies? 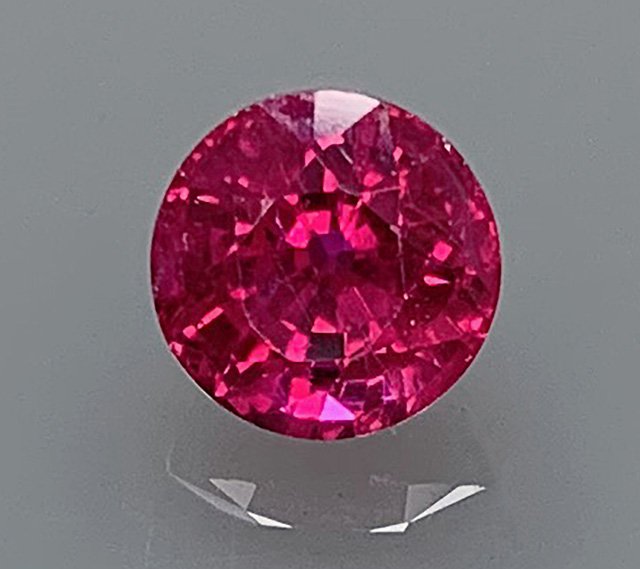 1.06 carat ruby. Courtesy Darling Imports.I’m back everyone! It’s been a while, but I can tell you, writer’s block is a real thing. Mix in a vacation (it was fantastic, thanks for asking) and launching a new website (shameless plug, check it out at darlingimports.com, it’s awesome), and you have a needed hiatus. But I’ve returned to talk about rubies. It seems to be the most requested gemstone, but it’s also the most difficult finding the right stone. Which makes me think, what’s up with rubies?

Raise your hand if you’ve been asked to find a “Pigeon’s Blood” ruby. It’s probably the only request you get for rubies. No hints of pink, just pure red. While this sounds reasonable, let’s break down what this means.

We’ll start with a little bit of science on ruby. The ruby, a member of the corundum family, is an aluminum oxide that receives its red color by the presence of chromium. Rubies are pleochroic, meaning they display two colors at once, in this case pinkish-purple and red. The majority of rubies naturally show pink due to their chemical composition and characteristics of how they form in nature. Finding material that is pure, vivid-red is one of the rarest – and priciest – qualities in a ruby. The material is available, but be prepared to pay for it.

Next, we’ll look at the history of the term “Pigeon Blood Red.” Gemworld wrote a short piece on rubies for their July 2019 issue (highly recommend giving it a read). They spoke a bit about the term and its association with color and region.

Traditionally, the term “Pigeon Blood Red” referred exclusively to Burmese rubies. Material coming from Burma set the standard for what rubies should look like. However, Burmese supply has always been scarce, making the material rare and priced accordingly. Additionally, a trade embargo with the United States from 2003 – 2016 and the rise in Chinese demand for top quality Burmese rubies made the US ruby market difficult terrain. Gemworld added, “a number of reports from dealers and laboratory gemologists that traveled to Burma indicate that there is not much production from any of the key Burmese sources at this point.”

As the saying goes, “as one door closes another one opens.” In this case, it opened in Mozambique. During the Burmese embargo we saw a rise in material from Mozambique in the US. A larger supply of high quality material at more affordable prices became available. The American market became the focal point for Mozambican rubies. As material began to take off, many suppliers began to associate “Pigeon’s Blood” as a color descriptor instead of a location indicator.

This is the final piece of important distinction. By applying this term to Mozambican rubies, the market shifted from location to desired color being the priority. GemResearch Swisslab (GRS), one of the most respected labs in Europe, was one of the first labs to begin assigning color types to its lab reports. While the term is found in literature or used in the past, in 2001 they created a four-color master set for grading rubies. The four colors: 1. Pinkish-red, 2. Red to intense red, 3. Vivid-red, 4. Deep red. GRS chose vivid red as the color comparison for rubies to qualify as “Pigeon’s Blood.”

On its website, GRS states the factors other than just color that qualify rubies as “Pigeon’s Blood.” One of these being the ratio of chromium and iron. But the most intriguing: “pigeon’s blood color grade at GRS is applied independently of the origin and the rubies can either be heat-treated or unheated.” A well respected lab is putting color above origin.

This allows the value of high quality gems from lesser known “romanticized origins” such as Mozambique, not to be overshadowed by so-called “branded origins” like Burma. GRS states that using this type of grading moving forward is, “beneficial for the end consumer to decouple color grades from origins.” As ruby production from Burma continues to slow and Mozambican rubies continue to rise, being able to receive this color association only increases their value.

Overall it’s a positive transition for rubies. An increase in high quality goods is beneficial to everyone. However, it can’t be overlooked that “pigeon’s blood red,” regardless of locale, is the upper echelon of rubies. For example, even with Mozambique’s higher production in high grade material GRS notes, “roughly 20% of the high value vivid red colors are granted the GRS-type ‘pigeon’s blood’ color.” Simply put, not even a quarter of the top-grade rubies receive this specific color grading. Knowing the backstory of “pigeon’s blood” rubies will help convey meaning and value to the end consumer.