Who wore it better? Kate or Diana?

Wed 30 years apart, Lady Diana, the Princess of Wales, and her daughter-in-law, Catherine, the Duchess of Cambridge, are arguably two of the most influential fashion icons of the last half century. 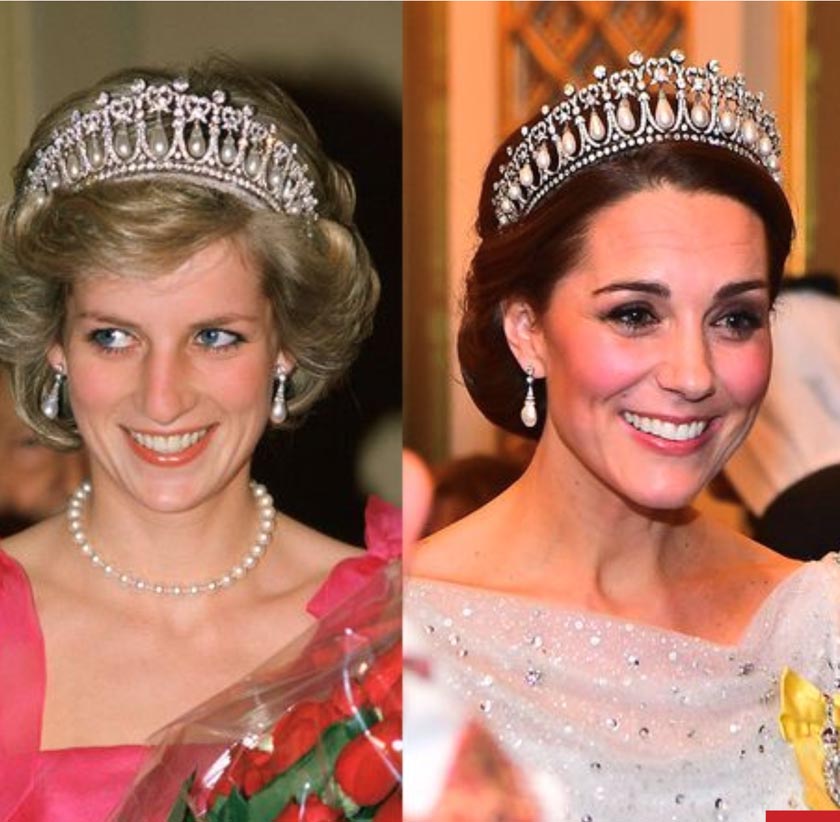 Although they never met and are of different generations, their fashion styles are remarkably similar, ranging from priceless Crown Jewels and tiaras to fashion-forward causal styles. Both developed their distinctive styles over a period of time – including trial and error – after entering royal life. Both became widely photographed, polished experts, influencing fashion trends wherever they appeared publicly.

Diana’s impact began before the age of social media “influencers,” but her striking polished looks and warm temperament caused a media sensation whenever she appeared.

Kate has come of age in the fully digital era, and the power of social media has magnified her influence manifold. Both are legends.

How do they compare? Remarkably, many photos exist to compare of them wearing, not just similar jewelry styles, but the same exact pieces! Some, such as the Cambridge Lover’s Knot Tiara, belong to the royal Crown Jewels collection, and are worn “on loan” at formal state events. Other pieces belonged to Diana personally and were passed on through her son William to Kate, beginning with the legendary 12 carat oval Ceylon sapphire engagement ring from Garrard.

Sapphires are a gem often coveted by royalty, and both Diana and Kate frequently paired the engagement ring with other coordinating sapphire pieces, such as the Double Drop Sapphire and Diamond Earrings recently worn by Kate for the first time.

Pearls are a classic both also embrace. The Collingwood pearl drop earrings, a gift of Collingwood Jewelers to Diana, were initially worn by Kate on a state visit to Spain. A triple strand pearl bracelet designed by Nigel Milne in 1988, a favorite of Diana, was debuted by Kate in 2017.

Both Diana and Kate loved jewelry and fashion, and have fun with it, making it their own. Diana had a favorite monogrammed “D” pendant necklace she frequently wore. Similarly, Kate has recently been seen with a monogrammed gold necklace with the initials of her three children – G, C, and L.

Both are not afraid to take – within limits – fashion risks, such as Diana’s wearing of an incredible emerald and diamond choker gifted to her by Queen Elizabeth as a headband! Both also embrace more casual, “off-duty” styles, such as Diana’s “athleisure” looks, and Kate’s skinny jeans and sneakers. Both are adept at making jewelry and fashion their own, leveraging trends to create individual styles that are uniquely theirs.

Kate will often wear jewelry as a tribute to Diana, as a remembrance and to honor her. At the time of their engagement, Prince William said presenting Diana’s engagement ring to Catherine helped include his mother as part of their marriage, so she would be present in spirit with them.

Although Diana and Kate have different appearances – Diana’s short blond hair and Kate’s long signature brunette locks – they both mastered the art of style and, on a deeper level, presenting a warm, caring, ideal to the world. They are not just fashion influencers, but goodwill ambassadors, inspirational icons.

Diana was the “Queen of Hearts.” The worldwide outpouring of emotion at her premature death was powerful  and genuine.

Catherine is already virtually universally loved, starting with the Queen, who sees a secure future of the monarchy with William crowned and Catherine as Queen Consort.