by Diana Jarrett GG, RMV
Share on FacebookShare on Twitter
Today, most consumers understand that diamonds may come in colors besides the ‘white’ or colorless variety. They may not know how they get color, or if they are treated to become colorful. Still they are acquiring a taste for these sparklers.

And because shoppers are gravitating toward more personalized expressions when it comes to bridal jewels, colored diamonds appear on the radar screen more often. Engagement and wedding jewelry are worn every day for one’s entire life, of course. For that reason, modern consumers use these important accessories as an expression of their distinctive personality and taste.

Fancy yellows have been known to consumers perhaps longer than other colored diamonds, and so they have earned the charming moniker of Canary Diamond. It’s not an official description within the trade, but it’s evocative and an instantly recognizable name for such a pretty stone.

Diamonds are classified by types that separate them through differences in their crystal structure.

Type 1a diamonds have nitrogen which is clustered together within the carbon lattice. Light yellow or brown diamonds can fall into this category.

Type 1b stones are those with nitrogen atoms evenly dispersed throughout the crystal lattice. These diamonds appear as deep yellow, or even orange and brown diamonds. Less than .01% of diamonds are in this category.

Relying on spectrum absorption bands observed in the spectroscope has long been critical to the testing process in diamond labs for determining if a crystal’s color is natural. Legendary GIA gemologist Dr. Richard Liddicoat Jr. reported on a yellow square stone he examined in the lab nearly a half century ago. “It had a beautiful orangy fluorescence to both short-wave and long-wave ultraviolet and was totally without the usual cape spectrum of a Canary diamond. This is what Basil Anderson, (long time director of the London Laboratory) referred to frequently as a true Canary. It was a very lovely stone. We do not see these often.”

Spectroscopy isn’t the only method used to separate diamonds by their unique characteristics. Some gemstones are further separated by natural inclusions exclusive to that species; yellow diamonds are one such type.

G. Robert Crowningshield, the mainstay of GIA’s New York laboratory for over a half century saw plenty of yellow diamonds in his day. In a published report in Gems & Gemology Vol. 30 No. 1, 1994; he indicated that type 1b diamonds are recognized by their clusters of needle-like inclusions. “On the basis of such clusters, we surmised that the (diamond being examined) Fancy Intense Yellow diamond was a type 1b. Some Fancy Intense yellow diamonds have another distinctive inclusion – oriented platelets that are even rarer than the dark needles in type 1b stones.” 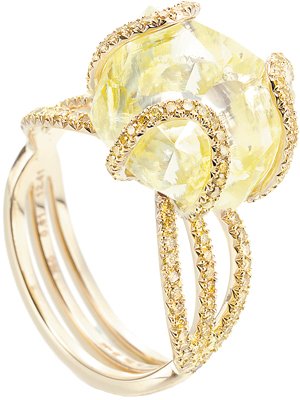 As would be expected with any natural occurrence, there are endless numbers of secondary color combinations that may turn up with yellow diamonds. Yellows often have modifiers like brownish-yellow that can lower prices and make the diamond more affordable, says graduate gemologist and appraiser, Art Samuels of JewelryAppraisals.com. “Generally people continue to value the purest and most saturated color or Vivid Yellow, and I believe that trend will continue.”

When it comes to yellow fancies, the first three designations – Faint, Very Light, and Light – are more often referred to as simply Cape Diamonds in the trade because they already appear on the GIA color grading scale, somewhere along the U-V scale right through to the end, or Y-Z.

Samuels recognizes the effect of cut to apparent color on fancy yellows. “In the 1980s diamond dealers realized that GIA and other labs were grading the color of yellow diamonds (fancy light yellow and more saturated yellows) face up instead of table down through the side, like they do with D to Z colors,” Samuels reports. “These dealers and cutters realized that by recutting diamonds from rounds to squares with special cuts they could get off-colors, like R through Z to face up as fancy yellow colors. At the same time, they could eliminate many inclusions that were near the edges, thus improving the clarity.”

Manufacturers and designers alike still push the lighter yellows in their collections for a few reasons, one being their price. The Faint Yellow stones are less expensive than the Vivid Yellows. Jewelry collectors feel the lighter yellows allow for more flexibility when paired to their wardrobe; seen almost as a neutral color. Clever jewelry artists actually play up their delicate sunny hue by combining them with warm yellow gold and often with an imaginative use of colored gemstones that complements their tender glow.

No matter how much the general public acclimates to fancy colored diamonds, they’ll continue to be considered a specialty item, even for the avid collector. Samuels understands the psychology behind this mind-set. “Clearly, even if you feel that a white diamond ring were a necessary purchase for the engagement, a yellow diamond is considered as much more of a luxury accessory.”

The Retailer’s Perspective: My 2021 Resolutions and Restitutions

Do you need a website? Yes, but… (the answer may surprise you!)

The Story Behind the Stone: Diamond Jim head to toe

NAJA’s ACE™ It “Not in Tucson” Conference